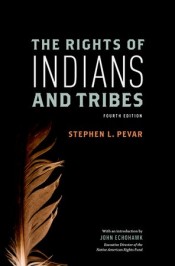 Rights of Indians and Tribes

How would you feel if the government confiscated your land, sold it to someone else, and tried to force you to change your way of life, all the while telling you it’s for your own good? That’s what Congress did to Indian tribes 125 years ago today, with devastating results, when it passed the Dawes Act.

During the 1800s, white settlers moved west by the tens of thousands, and the US cavalry went with them, battling Indian tribes along the way. One by one, tribes were forced to relinquish their homelands (on which they had lived for centuries) and relocate to reservations, often hundreds of miles away. By the late 1800s, some three hundred reservations had been created.

The purpose of the reservation system was, for the most part, to remove land from the Indians and to separate the Indians from the settlers. Reservations were usually created on lands not (yet) coveted by non-Indians. By the late 1800s, however, settlers were nearly everywhere, and Congress needed to develop a new strategy to prevent further bloodshed.

The government decided that instead of separating Indians from white society, Indians should be assimilated into white society. Assimilation of the Indians and the destruction of their reservations became the new federal goal.

Two very different social forces helped shaped this new policy: greed and humanitarianism. Many whites wanted Indian land and knew that they would have an easier time obtaining it if Indian tribes disappeared. This greed prompted Congress to pass the Dawes Act, also known as the General Allotment Act, in February 1887. The Dawes Act was also favored by many non-Indian social reformers who were aware that Indians were suffering unmercifully under the government’s existing reservation policies, and they sincerely believed that the best way to help Indians overcome their plight and their poverty was by encouraging assimilation. Although their motives differed, both groups pressured Congress to pass the Dawes Act. The objectives of the Act, as the US Supreme Court has noted, “were simple and clear cut: to extinguish tribal sovereignty, erase reservation boundaries, and force the assimilation of Indians into the society at large.” Indian tribes had no say in the matter and were not even consulted.

Most Indian tribes had no concept of private land ownership. Rather, land was communally owned and everyone worked together to gather what they could from the land and shared its bounty. In order to compel assimilation of the Indians, a scheme was developed that would undermine Indian life and culture at its core: individual Indians would be forced to own land for private use. Indians would be converted into capitalists.

To accomplish the new policy of assimilation, the Dawes Act authorized the President of the United States to divide communally-held tribal lands into separate parcels (“allotments”). Each tribal member was to be assigned an allotment and, after a twenty-five-year “trust” period, would be issued a deed to it, allowing the owner to sell it. Once the allotments were issued, the remaining tribal land (the “surplus” land) would be sold to non-Indian farmers and ranchers. Congress hoped that by allowing non-Indians to live on Indian reservations, the goals of the settlers and those of the humanitarian social reformers could both be satisfied: land would become available for non-Indian settlement within Indian reservations, and Indian poverty would be eliminated once Indians accepted the Anglo-American concept of private ownership and saw and emulated the farming and ranching habits of their new neighbors. “Within a generation or two, it was thought, the tribes would dissolve, their reservations would disappear, and individual Indians would be absorbed into the larger community of white settlers.”

The first goal — opening large portions of Indian reservations to white settlement — was a huge success. During the next fifty years, nearly two-thirds of the 150 million acres of land that Indian tribes owned in 1887 was sold to non-Indians. The second goal, however, was a dismal failure. Rather than assist Indians improve their lives and overcome poverty, the General Allotment Act made their condition worse. For one thing, many allotments were unsuitable for small-scale agriculture, and even those that were suitable required money for the purchase of equipment, cattle, or seeds that few Indians had. Moreover, many Indians didn’t want to become farmers and ranchers, and viewed such a lifestyle as distasteful. It simply was naïve and unrealistic — if not callous and racist — to think that Indian life would be improved by a method that forcibly confiscated tribal land and allowed outsiders to live on Indian reservations.

Congress passed a law in 1934 that ended the allotment process, and no further parcels of land were allotted to Indians. But the damage had been done. Indeed, today, more non-Indians live on some Indian reservations than Indians, and Indian life has been changed dramatically. The 125th anniversary of the Dawes Act is not, for Indians, a cause for celebration.

Stephen Pevar is the author of The Rights of Indians and Tribes. A graduate of Princeton University (1968) and the University of Virginia School of Law (1971), he was a Legal Aid lawyer on the Rosebud Sioux Indian Reservation from 1971 through 1974. Since 1976, Pevar has been on the national legal staff of the ACLU. He has litigated a number of cases in the field of Indian rights and has lectured extensively on the subject.