It’s tea now.  Once again I have little to add to what anyone can find in the OED and other easily available sources, though it will be a pleasure to continue singing praises to Hobson Jobson, and there is a redeeming quality to this post: at the end I’ll say something about tea caddy.  But first here are three quotations.  “That excellent and by all physicians approved China drink called by the Chineans Tcha, and by other nations tay, alias tee, is sold at the Sultana Head Coffee House, London.” (Mercurius Politicus, Sept. 30, 1658; The Century Dictionary).  “I remember well how in 1681 I for the first time in my life drank thee at the house of an Indian chaplain, and how I could not understand how sensible men could think it a treat to drink what tasted no better than hay-water” (1726), and finally, “There is among our people, and particularly among the womankind a great abuse of Thee, not only that too much is drunk…but this is also an evil custom to drink it with a full stomach; it is better and more wholesome to make use of it when the process of digestion is pretty well finished…. It is also a great folly to use sugar candy with Thee” (1672; the last two quotations are from Hobson Jobson).  In 1545 Chiai was said “to remove fever, headache, stomach-ache, pain in the side or joints,” and many other ailments, including gout.  I remember reading similar nineteenth-century ads, except that they recommended cigars for alleviating pain and clearing the lungs.

It will be seen that the main question about tea is the same as about coffee, namely: How did the form tea conquer its numerous rivals?  And the rivals were indeed many, though they can be divided into two groups: those beginning with ch- and sounding cha, chai, and the like, and those beginning with t- and spelled tee, tea, thee, etc.  Both variants are still known in the European languages: for example, English has tea (like Malay te), while Russian has chai (like Chinese Mandarin chha, according to one system of transliteration), homophonous with the first syllable of the word China.  In this case, the Malay may have been an intermediary between China and the rest of the world, but the word’s source is Chinese, for, as Hobson Jobson explains, “te [is] the utterance attached to the character in the Fuh-kien dialect.”  Knowing nothing about Chinese, I can only repeat what specialists say, and they seem to be unanimous in explaining the origin of the two variants.

The numerous forms of coffee (see them in the post for November 23) show that there was no progression in the development of the English name of this beverage.  We only witnessed different episodes in the history of its adaptation—a usual process in the fortunes of exotic articles of trade, plant and animal names, and so forth.  The same holds for tea.  Different forms coexisted, were affected by the pronunciation and spelling of the word in other languages (in English, Dutch and French influence has to be reckoned with), and at long last one such form became standard.  The state of “peaceful coexistence” is testified to by the first of the three quotations given at the beginning of this post and by an almost identical ad in The Gazette, which, also in 1658, advertised a China drink, “called by the Chinese Toha, by other nations Tay, alias Tee.”  Apparently, the norm had not yet solidified.  In 1711 Alexander Pope rhymed tea with obey.  In 1720 the rhyme tea / pay occurred.  In 1770 Samuel Johnson extemporized the verses in which tea was coupled in rhyme with me.  The spelling the (with an h) seems to be a borrowing from French, and it is amazing that English, despite its penchant for redundant letters, did not cling to the less rational variant.  Although mentioned by some Europeans considerably earlier, in England no citations of tea predate 1598.  In the seventeenth century, the product and the word gained in popularity, and the OED, like Hobson Jobson after it, gives multiple examples.  English has been spared the cacophony hidden in a phrase like “hot tea in a china cup,” but, if the Fuh-kien “utterance” had survived, the clash of two ch-words would have been obvious.

The history of caddy (originally, a box containing a certain weight), as in tea caddy, cannot be called dramatic. Authorities trace caddy to a Malay form, which is catty.  The Oxford Dictionary of English Etymology calls the substitution of –d- for -t- an unexplained alteration.  The first edition of the OED spoke of an apparent corruption of catty.  In those days, corruption was a common term in etymological studies.  Skeat went so far as to say: “Better spelled catty.”  I am not sure what would have been gained if a word universally pronounced caddy were spelled catty, but I would like to suggest that nothing has been corrupted or even altered in it.  Is it possible that the Englishman who transmitted catty as caddy was a speaker of a dialect in which t between vowels had become d?

The voicing of intervocalic t in American English is an open secret: matter and madder, latter and ladder, seated and seeded, tutor and Tudor, sweetish and Swedish, futile and feudal, Plato and play dough, and many others like them are homophones pairwise (textbooks usually cite writer and rider).  However, the Americans did not invent this pronunciation.  It has been attested almost all over the British north (I think it also occurs in Irish English), and the earliest example in a text goes back to the first half of the sixteenth century.  At least one word has even made its way into the Standard: French potage became poddidge and later porridge; the same happened to porringer.  (The change of a weakly articulated d to r is a process known from many modern Germanic dialects.  Incidentally, a change of some consonant to r is called rhotacism, from the name of the Greek letter rho.)  Assuming that our merchant or traveler was from Lancashire or from any part of England in which matter merged with madder, the origin of the present day form caddy will stop being a riddle.  Unfortunately, there is no way to raise the spirit of that adventurous man. 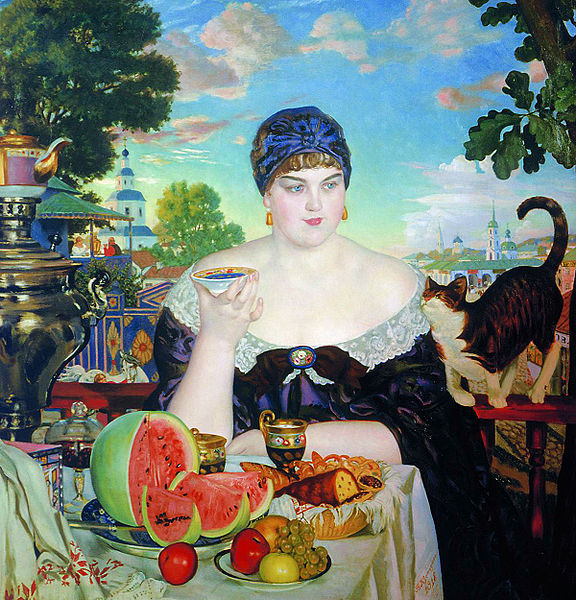