All sources inform us about the Arabic-Turkish home of the word coffee, though in the European languages some forms were taken over directly from Arabic, so that the etymological part of the relevant entry in dictionaries and encyclopedias needs modification.  There is a possibility of coffee being connected with the name of the kingdom of Kaffa, but this question need not bother us at the moment.  The main puzzle is the development of the form coffee rather than its distant origin.  The OED is, as always, helpful, but particularly instructive is the array of variants found in a book with the funny title Hobson-Jobson.  Far from being a book of humor, it is a wonderful dictionary of Anglo-Indian words.  In its pages we find recollections about a very good drink called Chaube (1573), Caova (1580), cohoo (1609) and, surprisingly for such an early date, coffee (also 1609), cahue (1615), coho, and copha (1628).  The route to Europe is supposed to be from Arabic quahwa via Turkish kahveh.  Later coffee became the standard form in English.  But, as we can see, there was no real progression: in 1609 some people said cohoo, while others already knew coffee.  The cause may be that the Arabic and the Persian pronunciations competed, one being prevalent on the coast of Arabia, the other in the mercantile towns.  The writers quoted above were mainly English, Dutch, French, and Italian.  All of them recorded the foreign word according to their speech habits, though some may have repeated what they had heard from their countrymen.  (Incidentally, the transliteration of the Turkish word as kahveh and the Arabic as qahwah may not be quite right, for the so-called round gaf of the Turkish word, as this consonant is known among the Anglo-Indians, sounds very much like Arabic q.  I would be grateful to specialists for either corroborating or refuting this statement.  Perhaps there are dialectal differences of which I am unaware.)

Several researchers wondered how hw could become f.  This, I think, is less of an enigma than many people think.  The opposite change of f to hv (with a guttural h, that is, kh, approximately as in German ach and Dutch Schipol) often occurs in non-standard Russian.  At one time, the consonant f was alien to it, and names like Filip (stress on the second syllable) turned into Khvilip.  The same substitution still happens in Russian dialects.  To produce the consonant f, one needs a passage of air (otherwise, the result will be p) and active lips (or at least an active lower lip).  The group hv satisfies both conditions, except that breath and the lips participate in its production consecutively instead of concurrently, as happens in f.  Since, as a general rule, seventeenth-century Europeans could not pronounce hw or hv, they combined both elements of articulation in one sound and ended up with f.  Its voiced partner v fits the situation even better, and we should applaud the man who wrote caova.  Chaube (that is, khaube) is a close relative of caova, because b is also a labial sound. Some speakers were lazy and left out w altogether; hence cohoo and its likes.  For comparison, one may cite Finnish kahvi and Polish kawa.

The vowels give us grief too.  Both Arabic and Turkish have a in the first syllable, while the English word has o.  The Dutch for coffee is also koffie, as opposed, for instance, to German Kaffee.  These differences have never been explained to everybody’s satisfaction, but the suggestions known to me make sense.  The vowel a is extremely tricky.  It can be pronounced in the front part of the mouth, as in French papa, more or less in the middle of the mouth cavity, as in Engl. cuff, or far back, as in Engl. spa.  It seems that as late as the middle of the nineteenth century u in Engl. cuff was rather close to what one today hears in American Engl. curry.  In any case, Russian speakers did not identify it with their a, as they do now.  Likewise, o varies greatly from language to language and from dialect to dialect.  Although hot is spelled alike in British and American English, it is pronounced so differently in the two countries (especially when America is represented by the Midwest) that foreigners have trouble distinguishing between hot and what they believe should be hut.  Russian immigrants pronounce the first syllable of Boston like Italian basta and listen in disbelief when someone tries to convince them that dot.com is not dut.come.  Those who learned English in its British r-less variety are apt to take even Bob for Barb.  The assumption that the Europeans confused a and o in the native (Arabic or Turkish) name of the drink looks plausible.

Finally, we notice that Engl. coffee has stress on the first syllable, while some other languages accent the end and that the word’s second vowel is sometimes a and sometimes e.  The plural of Arabic kahwe is kahawi.  Both the Turkish form and the European forms with -e seem to go back to the Arabic plural.  Polish kawa and Czech kava adapted themselves to the Slavic system of declension and do not reflect an ancient ending.  Stress on the second syllable is clearly more “genuine,” but one should always reckon with the possibility that it was borrowed from French.  In similar fashion, those languages that have initial accent may have been influenced by English.  It appears that there are at least as many variants of the word coffee as there are varieties of the product.  This is nice, for diversity is supposed to make us happy.

Now a few words about the promised kingdom of Kaffa in modern Ethiopia (formerly in Abyssinia).  Coffee trees do flourish there, and coffee is the main article of export from that part of the world.  Disclaimers to the effect that we lack sufficient evidence connecting coffee with Kaffa do not go far, because no competing (preferably Arabic) etymology of coffee has been offered.  I was pleased to discover that Paul Kretschmer, an extremely cautious etymologist, saw no objection to the derivation of coffee from Kaffa.

John Jourdain, a Dorsetshire seaman, wrote in his diary (1609) that the group “rested in the plaine fields untill [sic] three the next daie, neer unto a cohoo howse in the desert.”  Lloyd’s “cohoo howse,” the oldest establishment of this type in London, was certainly not opened in a desert.  While reading this blog (the first thing to do early in the morning every Wednesday, wherever you live), enjoy your cup of coffee and forget about many wars that were fought against this beverage in the past.  The coffee haters are now forgotten; the drink has won (as expected). 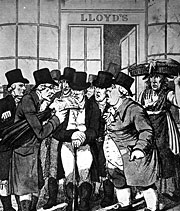 The multifaceted art of lying