It’s back to school, and that means it’s time for dictionaries to trot out their annual lists of new words. Dictionary-maker Merriam-Webster released a list of 150 words just added to its New Collegiate Dictionary for 2011, including “cougar,” a middle-aged woman seeking a romantic relationship with a younger man, “boomerang child,” a young adult who returns to live at home for financial reasons, and “social media” — if you don’t know what that means, then you’re still living in the last century.

Editors of the latest Concise Oxford English Dictionary announced new entries for sexting, “sending sexually explicit photographs via mobile phone,” cyberbullying, “using electronic communication to bully a person,” and mankini, “a brief one-piece bathing garment for men, with a T-back.” Over the years, the Concise Oxford has had to update many of its definitions to include new senses of old words. One hundred years ago, in the dictionary’s first edition, blouse was defined as a “workman’s loose linen or cotton upper garment,” while frock was a “monk’s long gown with loose sleeves.” The latest edition also drops words long out of use, like growlery “a private room or den to growl in,” and brabble, “paltry noisy quarrel.”

Joining in the back-to-school spirit, British dictionary-maker Collins also announced last week a list of “endangered words” being dropped from its dictionaries, including aerodrome, charabanc, “a motor coach,” cyclogiro, “a type of aircraft propelled by rotating blades,” and wittol, “a man who tolerates his wife’s infidelity.”

The great historical Oxford English Dictionary, which announces its additions quarterly with no regard at all to back-to-school, has a policy of never deleting a word once it’s been included. Words may become obsolete, but anyone reading an old manuscript, book, or newspaper still needs a reliable place to look them up.

Like all living languages, English is always changing: new words are coined and old ones are modified or discarded, as we scramble to keep up with the human imagination and an ever-changing world. There’s no political litmus test for dictionary inclusion, but innovations must meet some basic requirements: any new word or sense must be used frequently enough, by enough people, over an extended period of time.

Not all neologisms—that’s the technical term for new words—meet these criteria. Some terms are too ephemeral, or too localized, or if they’re technical terms, too specialized. Others are just too off-the-wall: lexicographers get letters all the time from people who have made up words they want included in the dictionary. A few of the coiners’ friends, or their mothers, may like the word, but that doesn’t make it ready for prime time. But thanks to the magic of social media and the internet, even these words now have a home: urbandictionary.com, an online site where anyone can upload a word and its definition without the formal approval of a lexicographer. (Warning: with strong language and sexual content, Urban Dictionary is not for the faint of heart.)

Sometimes, though, made-up words do find their way into dictionaries. Thon, a gender-neutral pronoun coined in 1884, appeared in Funk and Wagnalls’s Standard Dictionary (1898), and in Webster’s Second New International Dictionary (1934), though it didn’t appear in Webster’s First or Third.

Today, lexicography is more scientific, and teams of dictionary-makers base their editing decisions on massive databases of spoken and written English unavailable to the most famous of the English dictionary-makers, Samuel Johnson and Noah Webster, who could rely only on books that they, themselves, might have read, and on their own sometimes whimsical, sometimes erroneous, judgment. 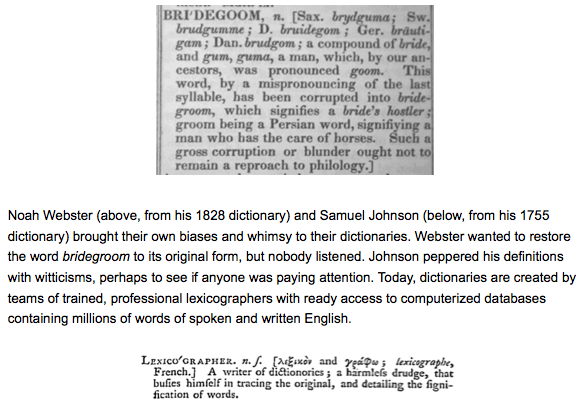 If you want to celebrate back to school with a new word, then why not back to school itself? The linguist Neal Whitman reports that back to school has morphed from an adverbial—It’s time to go back to school—to an adjective—Great back-to-school values, and more recently it’s become a noun as well: Save now on back to school. So far, no dictionary has recognized this transition. But if enough people use back to school as a noun phrase in a sentence on the internet, where dictionary-makers can find and collect it, we’d have the satisfaction both of being on the cutting edge of language change, and of doing our part to get a new word into the dictionary just in time for the new school year.

For extra credit: The French call back to school la rentrée, which literally means “the re-entry.” How would you get English dictionaries to recognize re-entry as a new, hip term for back to school? Or you could shorten it to rentry. Why might English speakers resist such a move? 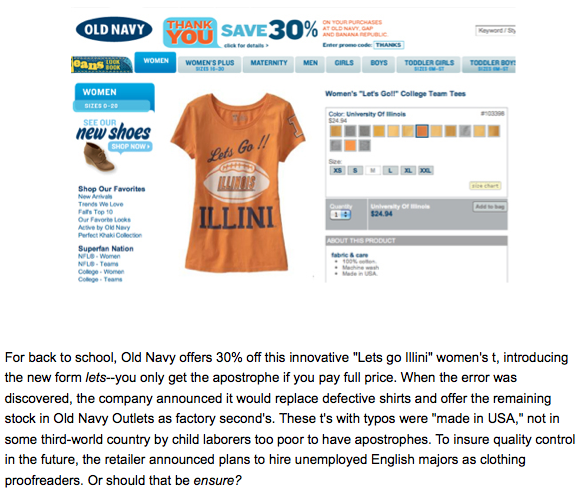 Understanding the Multi-functional Nature of the Countryside

Taking your better self to school: 5 renewals for teachers