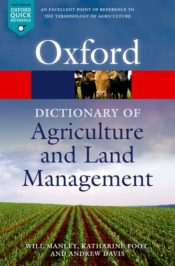 Dictionary of Agriculture and Land Management

This new dictionary covers both agriculture and land management, including animals and crops, farm machinery and systems, estate management, forestry and woodland, the environment, and rural recreation. It addresses the increasing overlap between agricultural sectors and the demands of the management of rural land and property.

It is tempting to see the countryside through a haze of a pink washed nostalgia as somewhere where life continues with a perceived simplicity in tandem with the seasons and inherited practises. However, just as urban areas change and evolve, so does the countryside. With this, comes a more complex wordscape that combines the traditional language of farming and the countryside with new and adapted terms. The country-dweller, or visitor, of history would still recognise the language and life of rural areas in many ways. A plough may still be used to cultivate the land, and this land may itself be scattered with the same veteran trees that were there hundreds of years ago. People still go about living and working in rural areas, some engaging in traditional crafts, like coppicing, whilst others might live in the buildings that were occupied by their forebears. These buildings, themselves, might now form part of the built heritage of the countryside, and may, perhaps, be protected by some form of planning designation.

However, the countryside does evolve, and technology has brought about an increasing and continuing change; the plough has evolved from a simple piece of equipment pulled by oxen or horses, to a more complex example of machine-driven engineering. The role of the horse has altered in many countries, from being a crucial source of power on the farm to an animal more often kept for recreation. New plant and animal breeding approaches have resulted in new varieties of crops being produced, alongside livestock with improved characteristics for food production. Technologies such as geographic information systems (GIS) are also increasingly being incorporated into agriculture and these sit alongside other, more controversial, developments such as genetically modified organisms (GMOs).

The evolution of the countryside does not happen in isolation from wider societal developments, global issues, and pressures. By its nature, the countryside is multi-functional and faces many potentially competing demands. Whilst it is tempting to think of rural areas as merely providing food and other resources such as timber or minerals, the role of the countryside has always been more complex than that, and arguably becomes ever more so. How the land is managed affects our water quality and availability, the biodiversity that co-exist in our rural areas, and the intrinsic beauty of our landscapes. The countryside provides spaces for recreation and tourism, jobs for people, and homes for them to live in. Many rural areas exist as centres of economic activity – not just traditional farming and forestry businesses – but increasingly with the development of technology, for a range of other forms of commerce, for example, internet-based homeworking, or as a location for distribution centres. Many farmers, themselves, are driving this broadening of economic activity through diversification of their own businesses into new areas such as renewable energy production, leisure and tourism, or equine enterprises. These developments are not, though, without their tensions; the need to balance the protection of landscapes, habitats, and high quality food-producing land is often not easily compatible with the provision of what may be much needed new infrastructure or affordable housing. Increasing world population numbers also make this an ever more difficult conundrum to solve. Efforts to try to encapsulate some of the broad range of services provided by rural areas have, in recent years, led to the development of a series of new terms, each with their own nuances. Such terms include ecosystem services which aim to describe those services provided to us by nature, for example water purification and carbon sequestration, through to other expressions which have a more economic focus to them, such as natural capital and public goods.

The countryside has long been subject to significant government interest. With government involvement comes specific terminology such as that evolving from the Common Agricultural Policy or the World Trade Organization. Arguably this involvement has, historically, been driven by the countryside’s vital role in producing food; however, in more modern times, it also reflects the complexity of demands that society makes of rural areas. Alongside this has come an increasing international awareness of issues like climate change, loss of biodiversity, and soil degradation and an enhanced focus on balancing environmental, economic, and social needs through the framework of sustainable development. This has translated into the mainstreaming of socially-, environmentally-, and conservation-conscious approaches into rural policies in many countries, thereby bringing with it a new language of mechanisms such as agri-environment schemes, and cross-compliance, and with some farmers adopting approaches such as integrated farm management (IFM) or organic farming. Against this background, concerns about the potentially negative environmental impacts that poor land management can generate are increasingly balanced by recognition that appropriate land management can also deliver positives such as carbon sequestration, natural resource protection, and flood alleviation.

The rural wordscape is therefore as complex, multi-faceted, and ever evolving, as the wider countryside. Just as our forebears may have recognised at first sight many of the physical characteristics of today’s countryside, they would also have understood much of its language. However, on looking, and listening, more carefully, they would soon have become aware that, just as the multi-functional nature of the countryside has built and evolved over time, so have the words used to describe and discuss it.

Photo by Federico Respini via Unsplash

Will Manley is a Principal Lecturer at the Royal Agricultural University.  He is a Chartered Ecologist and a Fellow of the Institute of Ecology and Environmental Management.  In association with lecturing responsibilities he has over 50 publications covering a range of agricultural, environmental, and rural policy evaluative research.

Katharine Foot is a Senior Lecturer at the RAU.  She is a Rural Practice Chartered Surveyor, a Fellow of the Central Association of Agricultural Valuers, and a qualified teacher.  She worked in private practice before joining the academic staff at the RAU, and has a particular interest in planning and sustainability.

Andrew Davis farmed a large mixed farm for over 15 years before becoming a regional director for the then Country Landowners Association.  Subsequent to this he joined the academic staff at RAU where his lecturing responsibilities include farm and estate management.