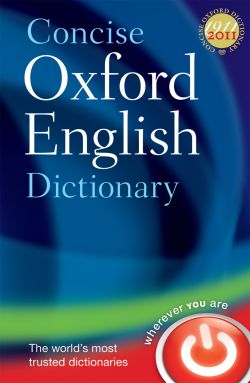 
Since the publication of its first edition in 1911, the revolutionary Concise Oxford Dictionary has remained in print and gained fame around the world over the course of eleven editions. This month heralds the publication of the centenary edition: the new 12th edition of the Concise Oxford English Dictionary contains some 400 new entries, including cyberbullying, domestic goddess, gastric band, sexting, slow food, and textspeak. These additions are just carrying on the tradition of a dictionary that has always sought to be progressive and up to date.

The Edwardian period to Generation Y

Although the first edition of 1911 drew on the great historical account of English, the Oxford English Dictionary, it was not simply an abridgement: it was a completely different kind of dictionary, one that sought primarily to cover the language of its own time. It recorded new words of the Edwardian period such as aeroplane, carburettor, motorist, radioactive, rag-time, and Zionism, although there are no entries for words such as computer, television, or cinema. There is, however, one for kinematograph, ‘contrivance for projecting in rapid succession on screen a series of instantaneous photographs, so as to give effect of motion’, while marconigram, ‘message sent by Marconi’s system of wireless telegraphy’, was 1911’s hi-tech equivalent of cloud computing.

The editors of the first edition, brothers Henry and Frank Fowler, stated that ‘we admit colloquial, facetious, slang, and vulgar expressions with freedom, merely attaching a cautionary label’. Among the slang words they included were flapper, ‘girl not yet out [in society]’, foozle, ‘do clumsily, bungle, make a mess of’, mag, ‘halfpenny’, piffle, ‘talk or act feebly, trifle’, and potty, ‘trivial, small’.

Sadly, the new edition has no room for tremendous words like brabble ‘paltry noisy quarrel’ and growlery ‘place to growl in, private room, den’ – what we might call a man cave these days. But the preoccupations of today’s Generation Y  have opened the door to some equally colourful vocabulary – how about momo, noob, nurdle, and woot?

Monks in frocks: changes in meaning

Much of the first edition still seems surprisingly modern, but meanings of many common words have of course changed, and definitions have a period charm. Take that for terrier, ‘kind of active & hardy dog with digging propensity’, or greet, ‘accost with salutation’. A blouse then was a ‘workman’s loose linen or cotton upper garment’, while a frock was a ‘monk’s long gown with loose sleeves’.

Among the new meanings added to the 12th edition of the Concise is one for follower, ‘someone who is tracking a particular person, group, etc. on a social networking site’. In dictionaries of current English some senses which have fallen into disuse have to be removed to make way for new ones such as this: for example, we no longer give the first edition’s sense of ‘man courting maidservant’. Another new sense is at friend, where the primary meaning hasn’t changed much since the first edition, though the definition there has a poetic quality that the current one perhaps lacks: ‘one joined to another in intimacy & mutual benevolence independent of sexual or family love’. It’s the secondary senses that have  changed – the new meaning is ‘a contact on a social networking website’, while the first edition had ‘person who acts for one, e.g. as second in duel’.

Indecent dancing in the naughty nineties

In 1911 the cancan was a relatively new thing, associated with the ‘naughty nineties’ (the 1890s) in Paris. The Fowlers were in no doubt about their opinion of this racy French craze – they defined it simply as ‘indecent dance’. (They weren’t the only Oxford authors with a lofty attitude towards the cancan: Percy Scholes, editor of the first Oxford Companion to Music (1938), wrote that ‘Its exact nature is unknown to anyone connected with this Companion.’) The Fowlers weren’t puritans, but they were men of their time, and it’s not certain what they’d have made of the new sense of cougar – now no longer their ‘large American feline quadruped’ but now also ‘an older woman seeking a sexual relationship with a younger man’.

Angus Stevenson is the editor of the new, twelfth edition of the Concise Oxford English Dictionary. We are also publishing a limited-edition facsimile of the original 1911 edition. This post also appears on the OxfordWords blog.