Wild Unrest: Charlotte Perkins Gilman and the Making of "The Yellow Wall-Paper"

Today on OUPblog we’re celebrating the 100th International Women’s Day. I’ve invited intern extraordinaire Hanna Oldsman to contribute her thoughts on “The Yellow Wall-Paper” by Charlotte Perkins Gilman. A groundbreaking and important early piece of American feminist literature, it was first published in January 1892 in The New England Magazine and has been subject to countless interpretations, as it powerfully illustrates 19th century attitudes about women’s physical and mental health.

For me, one of the most interesting lines of Charlotte Perkins Gilman’s “The Yellow Wall-Paper” appears near the very beginning of the story. The words are an aside, a nervous excuse—and the only part of this rambling, uncomfortable tale to be cordoned off with parentheses: “John is a physician,” the narrator writes furtively, “and perhaps—(I would not say it to a living soul, of course, but this is dead paper and a great relief to my mind—) perhaps that is one reason I do not get well faster.” 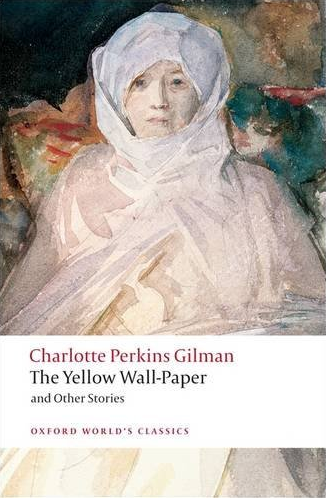 “The Yellow Wall-Paper” is a story in which dead things come to life. The narrator, ill with what her husband calls a “temporary nervous depression—a slight hysterical tendency,” imagines that the wallpaper that covers her bedroom moves, that behind the “sprawling” pattern creeps a woman, trapped, who shakes the bars that confine her.  When I first read this story, I found it odd that the narrator believes the pages of her diary to be dead while the wallpaper sprouts heads like hydras and its curves “commit suicide—plung[ing] off at outrageous angles,” while its “pattern lolls like a broken neck and two bulbous eyes stare.” Odd, and also devastating: later in the story, she wishes that she had someone to whom she might divulge her thoughts—someone who might provide “any advice or companionship about [her] works.” There is some connection between the paper on which she writes and the papered walls on which her imagination paints a Gothic tale; it is as if her first imaginative impulses, suppressed, press themselves into the walls.

The irony of the words “but this is dead paper,” is, of course, that they don’t remain hidden: as we read this story, we are made party to the narrator’s madness and forced to take the place of her friends and family who refuse to listen. Her words make the nightmarish hallucinations seem real to us. Reading Gilman’s private writings is a similar experience. I recently had the chance to peruse two books from OUP on the work and life of Charlotte Perkins Gilman: the Oxford World’s Classics edition of The Yellow Wall-Paper and Other Stories, edited by Robert Shulman, and Helen Lefkowitz Horowitz’s Wild Unrest: Charlotte Perkins Gilman and the Making of “The Yellow Wall-Paper”. Wild Unrest, in contrast to other books about this late 19th-century feminist and author, is less about Charlotte Perkins Gilman the public figure and activist than it is about Charlotte’s private life and thoughts and struggles. Horowitz therefore discusses not only Charlotte’s stories and speeches, but also her unpublished writing: letters, diary entries, forgotten plays. The thoughts and feelings that still linger on these dead pages brought my attention to several small details in “The Yellow Wall-Paper” that I had previously overlooked. The blackberry vines beneath which a (hallucinated) woman hides, for example, before seemed merely picturesque, if thorny; now, I can’t help but think that this small detail may be an oblique allusion to the attempted rape of a girl who refused to give a man the blackberries she carried, an event which inspired Gilman to make a public speech on sexuality education for girls and women. In another passage, the narrator writes, “[I] lay there for hours trying to decide whether that front pattern and the back pattern really did move together or separately”—which reminds me of the lines of a play that Gilman wrote with her friend Grace Channing, quoted in Wild Unrest:

HE: Keep behind me! Don’t push so.
SHE: Oh! you hurt! I want to get out!
HE: You mean, you want to get ahead!
SHE: I don’t! I want to get even!
HE: Horrors! You don’t belong even! You weren’t made even! You can’t get even! You are a fool—I mean an angel! Here, go back! You’re a slave—I mean a queen! Get behind, I tell you! Heavens and earth, woman! Don’t you understand? You were divinely ordained to stay behind; you were naturally evolved to stay behind; you look much better behind; you are far happier behind; you are more—ahem—convenient behind; you are constitutionally incapacitated for anything but staying behind; it is absolutely impossible for you to get out from behind; and therefore I will fight till I die to keep you behind! But if you’ll only stay behind and keep quiet, we’ll be good friends. See?

When Gilman talked about “The Yellow Wall-Paper,” she claimed that it was written as a cautionary tale against the medical practices (the infamous “rest cure”) of Dr. S. Weir Mitchell, who had treated her for depression. Yet, as Horowitz notes, the little pieces of Charlotte’s life that show up in her narrator’s words add breadth to the criticisms she levels at society: this story is not about one man, but about a more pervasive discontent, pinpointed in the darkly comic passage above. The narrator’s confusion about whether the two competing patterns move amiably together, or whether the creeping woman (the back pattern) shakes the bars in front of her (the front pattern) consumes her—just as the question of whether she could continue to exist behind her husband and the overwhelming pattern of domestic life became increasingly distressing for Charlotte.

As I read Wild Unrest, I found that the suppression of writing and imagination was something of a theme in Charlotte’s life, a recurring “suggestion” made by her mother, her husband Walter, and her doctor.  When Charlotte was thirteen and enamored of the imaginary worlds brought to life in novels and epic poems, her mother told her to put an end to these fantasies—and Charlotte, for a time, complied. Yet, as she later told Dr. Mitchell, these imaginative tales were replaced by “a sea of Poe-like visions, carrying my dream life through a most wicked and unhealthy world.”

In “The Yellow Wall-Paper” this sea of visions takes form, finally written down, even as the narrator’s crazed thoughts burst messily onto the wallpaper; the imaginative worlds of both writer and dreamer puncture the apparent bliss of domestic life. Do those words, “but this is dead paper,” mean that Charlotte doubted the resilience of words and the vitality of stories? I don’t think so. If anything, she is hyper-aware of their power. By including this dismissive aside she brings our attention to the mechanics of the story; she reminds us that we are only reading the fantasy of a fantasy and then, as she weaves together an unsettling tale, makes us forget that we are reading at all.

Helen Lefkowitz Horowitz is Sydenham Clark Parsons Professor of History Emerita at Smith College and is the author of Rereading Sex: Battles over Sexual Knowledge and Suppression in Nineteenth-Century America; The Power and Passion of M. Carey Thomas; and Alma Mater: Design and Experience in the Women’s Colleges from Their Nineteenth Century Beginnings to the 1930s.

Robert Shulman is Professor of English and American Studies at the University of Washington. He is the author of Social Criticism and Nineteenth-Century American Fictions and numerous articles on nineteenth- and twentieth-century American literature and political culture. He has edited Owen Wister’s The Virginian for Oxford World’s Classics.

How well do you know these literary classics by women? [Quiz]