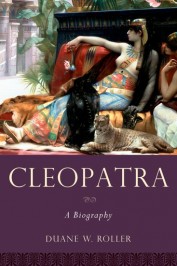 Racial profiling and manipulation have been around for a very long time. It has become an issue in contemporary politics, and over 2500 years ago the Greek historian Herodotos wrote that ethnicity was regularly turned to political ends. Cleopatra VII, the last queen of Egypt and a woman of great ability, is often a victim of racial profiling, as today people can be more interested in her racial background than her many accomplishments. Such concerns have recently come to the forefront with the announcement that in at least one of the several Cleopatra movies currently planned, a white (instead of black) actress would play the role of the queen. It is hard to imagine that race would be more important than acting ability, but clearly others disagree.

It has been suggested – although generally not by credible scholarly sources – that Cleopatra was racially black African. To be blunt, there is absolutely no evidence for this, yet it is one of those issues that seems to take on a life of its own despite all indication to the contrary. What follows lays out the evidence for Cleopatra’s racial ancestry, but one must not forget that this is of little importance in assessing the legacy of the queen in world history.

Let us consider exactly the evidence for Cleopatra’s racial background. It’s a little complicated, so do follow closely! She was born in early 69 BC as the descendant of a line of Egyptian kings in a dynasty that went back 250 years. Her ancestor Ptolemy I, a companion of Alexander the Great, founded the dynasty in the late fourth century BC. Ptolemy was Macedonian Greek in origin (he grew up at the royal court of Alexander’s father in Macedonia, the northern part of the Greek peninsula), and established himself as king of Egypt in the convulsive years after Alexander’s death. The descent passed through six successor Ptolemies until it reached Cleopatra’s father. So Cleopatra was no more than eight generations away from being pure Macedonian Greek.

But what about the mothers? Women are always difficult to find, even in royal dynasties, and it is here that questions of her racial background have been raised. For the first six generations the wives of the ruling Ptolemies also came from the same Macedonian background as their husbands. So until the time of Cleopatra’s great-grandfather, the ethnic makeup of the dynasty was still pure Macedonian Greek. In fact two of her ancestors married their sisters, thus reinforcing the Macedonian ethnicity.

It is with Cleopatra’s grandfather that uncertainties develop. Although he had two wives of traditional Macedonian background, he seems to have had at least one concubine of uncertain origin, who may have been Cleopatra’s grandmother. But this is by no means clear, and some sources indicate she was her husband’s sister, and thus pure Macedonian.

Assuming, however, that Cleopatra’s grandmother was not from the traditional Macedonian Greek stem, the question arises as to just what she was. Sources suggest that if she was not Macedonian, she was probably Egyptian. So by the time of Cleopatra’s grandparents, there may have been an Egyptian element in the racial stem.

Cleopatra’s father also had several wives. One was his sister, but again there is evidence that some of his five children had another mother. Yet the geographer Strabo (one of the few contemporary sources for the life of Cleopatra) wrote that all the wives of her father were women of significant status, which rules out any slaves or concubines, and makes it possible that Cleopatra’s mother was of the traditional Macedonian Greek stock. But this may not have been the case, so one may need to look elsewhere for the ethnic background of Cleopatra’s mother. Yet there is only one other ethnic group that produced women of status in contemporary Egypt: the Egyptian religious elite, which in fact had a long history of intermarriage with the Ptolemaic dynasty. So Cleopatra’s mother may have been Egyptian, but she probably also had some Macedonian background.

There are three other matters worthy of consideration. One is that Cleopatra was the only ruler of her dynasty who knew, in addition to her native Greek, the Egyptian language. This suggests close association with an Egyptian speaker, perhaps her mother. Secondly, Cleopatra’s daughter, who became queen of Mauretania (and was mixed ethnically herself, as her father was Roman), honored the Egyptian religious elite at her far-off capital of Mauretanian Caesarea (in modern Algeria). This makes sense if they were part of her ancestral family. And third – especially relevant in demolishing any suggestion that Cleopatra had black African blood – the representations of her in Greek and Roman art and coins do not show anything other than traditional Mediterranean ethnicity, although artists were perfectly capable of showing other ethnic groups.

To sum up: it is quite possible that Cleopatra was pure Macedonian Greek. But it is probable that she had some Egyptian blood, although the amount is uncertain. Certainly it was no more than half, and probably less. The best evidence is that she was three-quarters Macedonian Greek and one-quarter Egyptian. There is no room for anything else, certainly not for any black African blood.

Yet all this argumentation is rather silly. What is important about Cleopatra is that she became one of the most powerful rulers of her era. She was a skilled linguist, a naval commander, an expert administrator, a religious leader who was seen by some as a messianic figure, and a worthy opponent of the Romans. She was worshipped in Egypt for at over 400 years after her death. Race seems irrelevant in such a situation, and it goes without saying that people should be judged by their abilities, not their race. But sadly, even in twenty-first century America, this is far from the case. It is unlikely that Cleopatra cared about her racial makeup, but people over 2000 years later still obsess about it, thus trivializing her accomplishments.

Duane W. Roller is a historian, archaeologist, classical scholar and Professor Emeritus of Greek and Latin at The Ohio State University. The author of eight books, including 'Through the Pillars of Herakles' and 'The Building Program of Herod the Great', he has excavated in Greece, Italy, Turkey, and the Levant. In his newest book, Cleopatra: A Biography, he provides the definitive biography of the queen, not as the figure known in popular culture, but as the last Greek queen of Egypt.