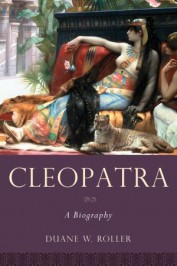 I have a confession to make. Most of what I know about the ancient Greece and Rome comes from watching the classic TV show Xena: Warrior Princess. Xena not only encounters Julius Caesar, Pompeius, and Octavian in her adventures, but Marc Antony (Marcus Antonius) and Cleopatra as well. Obviously, the writers use ample creative license, so when I sat down to read Cleopatra by Duane W. Roller, I was eager to learn how the fictional Cleopatra and the historical one compared.

Below are ten things I learned.

Whenever I think of the name Cleopatra, only one person comes to mind. However, there were six other Cleopatras before her, not including the original Cleopatra – Alexander the Great’s sister.

2. Cleopatra was a powerful and important woman; she didn’t need to “seduce” Caesar or Marcus Antonius.

3. Cleopatra was a writer; she wrote a medical treatise called, Cosmetics.

It may have been called ‘Cosmetics’, but this was no Cosmo article. It was a medical and pharmacological work including several remedies for hair loss and dandruff.

4. Cleopatra murdered two of her siblings.

Cleopatra had Marcus Antonius kill her younger sister, Arsinoë IV when it became apparent that opposition forces were rallying around her. Her brothers, Ptolemy XIII and Ptolemy XIV, both ruled with her for a short time; however, Ptolemy XIII died in an ensuing battle while Cleopatra allegedly poisoned Ptolemy XIV after the birth of her son, Caesarion. While these actions seem brutal, this makes Cleopatra no different than any other ruler. For example, Octavian went on to murder Cleopatra’s son and Marcus Antonius’s son to ensure his own power.

5. Cleopatra was in Rome when Caesar was assassinated.

Romans were not particularly enthralled with Caesar’s relationship with Cleopatra and her visit probably provided the final impetus to remove Caesar.

6. Cleopatra had four children – only one survived to adulthood.

Cleopatra’s first child was a son by Caesar. She also had twins, Alexander Helios and Cleopatra Selene, as well as another son, Ptolemy Philadelphos, all by Marcus Antonius. Cleopatra Selene eventually became the Queen of Mauretania.

While Caesar and Marcus Antonius granted her requests for new land, it was also in Rome’s best interest for Cleopatra to control local areas. Rome actively sought alliances with friendly kings to manage these areas with Rome’s interests in mind.

8. Cleopatra was not friendly with Herod, King of Judea.

The same Herod that sought the baby Jesus, was in a constant power struggle with Cleopatra.

9. Cleopatra was most likely a Roman citizen.

10. It’s unclear that Cleopatra died from an asp’s bite.

While death by snake bite wasn’t unheard of in Cleopatra’s time, it probably wasn’t the most effective method. She could have administered poison through a needle which could have been mistaken for an asp’s bite.

Duane W. Roller is a historian, archaeologist, classical scholar and Professor Emeritus of Greek and Latin at The Ohio State University. The author of eight books, including 'Through the Pillars of Herakles' and 'The Building Program of Herod the Great', he has excavated in Greece, Italy, Turkey, and the Levant. In his newest book, Cleopatra: A Biography, he provides the definitive biography of the queen, not as the figure known in popular culture, but as the last Greek queen of Egypt.