We recently launched Powers of Persuasion: The Inside Story of British Advertising by Winston Fletcher. Today, I am pleased to be able to bring you an original essay by Winston on the period where the British led the way in the advertising world. Check back tomorrow for photos from the party at London’s Somerset House. 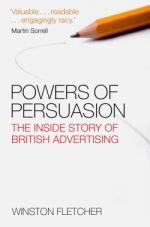 The emergence of Britain started slowly. At the Cannes Festival, which was then – and still is – the arbiter of global advertising creativity, Britain was outpaced by the USA throughout the 1960s, and in 1970 and 1971. Then the British climb began. In 1972 British and American advertising agencies took home an equal number of Gold Lions (4 apiece), and Britain won the cinema Grand Prix. The next year Britain won more awards than any other country, though most of these were Silvers.

In 1974 the British Gold rush really got going. That year Britain collected 18 Gold and Silver Lions and the Palme D’Or. In 1975 the festival moved to Venice for a year, and the British trade press headline simply read ‘Venice Goes British’. Come 1976 the festival returned to Cannes and the headline ran: ‘Britain Sweeps The Board’. The Brits had again pocketed the Palme D’Or, plus 10 of the 19 Gold Lions. In 1977 it was ‘Britain Comes Out Best Again’, with the Grand Prix for television and another 6 Gold Lions. Then, in 1978, Britain reached its zenith. The Brits won the Grand Prix for both television and cinema – a rare occurrence – and garnered a massive 80 Gold, Silver and Bronze Lions.

After 5 years at the top, there followed a couple of relatively fallow, but not wholly unsuccessful, years (1979 & 1980). But in 1981 the British made a come back (‘Britain Comes out Best Again’) with more Gold and Silver Lions than any other country. And Britain’s creative leadership continued throughout the first half of the new decade, when it collected 45 Gold Lions against America’s 23.

What caused this burgeoning of British advertising creativity? A combination of factors. Commercial television had begun in Britain in 1955, and for the first two decades British television advertising was dominated by American advertisers – particularly household cleanser and other packaged goods advertisers, whose approach to creativity was strictly formulaic. Every commercial had to abide by the ‘proven rules’. During the 1970s British advertisers started to become much more important in their home markets, and more confident, and allowed British creativity much more freedom. Creativity flowers in freedom. Moreover this occurred against the background of a recovery in Britain’s economic performance, after a long period of economic tribulation. But probably most important of all, there happened to be in London during those years a raft of quite exceptionally talented advertising people, who worked both as colleagues and as rivals to outperform each other creatively, in a highly charged competitive atmosphere.

Additionally, their creativity was underpinned by other developments which also helped British advertising leap ahead. More or less simultaneously, two London agencies (Boase Massimi Pollitt and J Walter Thompson London) invented a new system of campaign development called ‘account planning’. Account planning integrated research into the creative process in a way that had not been done before, and in a way that creative people found far more sympathetic than they had found earlier systems. Account planning spread slowly at first, but it is now generally accepted around the globe as the best way to develop new campaigns.

At the same time, in the mid-1970s. Britain developed the world’s best system of advertising self-regulation – a system that maximises creative freedoms within responsible constraints. And advertising began to be used more and more by British Governments to promote worthwhile social causes, from blood-giving to drink-less driving. Simultaneously Britain began to build what has become the world’s largest advertising archive, ‘The History of Advertising Trust.’ Out of this ferment of activity two commercial giants emerged: Saatchi & Saatchi and the WPP Group. Both joined the world’s advertising leaders, though Saatchi & Saatchi later stumbled and fell.

For the British advertising industry the second half of the 20th century was a heady era – when it reached peaks that it will probably never quite achieve again.

Did emotional appeals help to win the Brexit referendum?