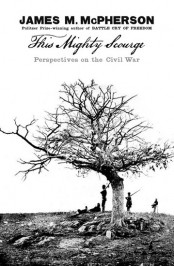 The Mighty Scourge: Perspectives on the Civil War

Below is an essay from James M. McPherson, a historian who truly needs no introduction. His new book This Mighty Scourge: Perspectives on the Civil War provides fresh insight into one of the most written about topics, the American Civil War. Below, to commemorate the bicentennial celebration of Lincoln, is an essay about his greatest moment.

On August 23, 1864, President Abraham Lincoln wrote the following memorandum and asked his Cabinet members to sign it on the back side of the paper without reading it (to forestall leaks):

“This morning, as for some days past, it seems exceedingly probable that this Administration will not be re-elected. Then it will be my duty to so co-operate with the President elect, as to save the Union between the election and inauguration; as he will have secured his election on such ground that he cannot possibly save it afterwards.”

How had things come to such a pass? How was it possible that Lincoln, whom historians rate as America’s greatest president who led the nation to victory in its largest war, could anticipate that he would not be re-elected? Precisely because, at the time he wrote these words, victory in that war appeared unlikely. The military campaigns launched by Generals Ulysses S. Grant and William T. Sherman with high hopes for imminent victory in the spring of 1864, had bogged down in stalemate and apparent failure by August – after three months of the worst carnage in the war. Weary of the slaughter and longing for peace, Northern voters regarded Lincoln’s leadership as a failure and were ripe for a new policy and new leadership. A week after Lincoln penned his despairing memorandum, the national Democratic convention nominated the popular General George B. McClellan for president on a platform that declared:

“After four years of failure to restore the Union by the experiment of war, we demand that immediate efforts be made for a cessation of hostilities, with a view to an ultimate convention of the states, or other peaceable means, to the end that, at the earliest practicable moment, peace may be restored on the basis of the Federal Union.”

Any overture by the North for peace negotiations in such circumstances would have ensured that “the earliest practicable moment” to restore the Union would not come for many years, if ever. During the previous six weeks, two contacts between unofficial envoys of the Union and Confederate governments to explore the possibility of peace negotiations had only elicited the non-negotiable conditions of Presidents Lincoln and Jefferson Davis.

Lincoln’s conditions were reunion and the abolition of slavery; Davis’s condition was Confederate independence. But in the atmosphere of Northern war weariness during that dark summer, Democrats and even some antislavery Republicans accused Lincoln of a “blunder” for his insistence on abolition as well as Union as a pre-condition for negotiations. “Tens of thousands of white men must bite the dust to allay the negro mania of the President,” declared one opposition newspaper. For that purpose “our soil is drenched in blood . . . the widows wail and the children hunger.” Henry J. Raymond, editor of the New York Times and also chairman of the Republican National Committee managing Lincoln’s reelection campaign, told the president in August that his chances for reelection were nil. “Two special causes are assigned for this great reaction in public sentiment,” said Raymond, “the want of military success, and the impression that we can have peace with Union if we would but that you are fighting not for Union but for the abolition of slavery.”

Lincoln came under enormous pressure to drop emancipation as a pre-condition for negotiations. But in what must be seen in retrospect as his finest hour, he refused to do so. He told weak-kneed Republicans that “no human power can subdue this rebellion without using the Emancipation lever as I have done.” He noted that more than 100,000 black soldiers and sailors, most of them former slaves, were at that moment fighting for the Union. “If they stake their lives for us,” said Lincoln, “they must be prompted by the strongest motive,” the promise of freedom.

“And the promise being made, must be kept. . . . Why should they give their lives for us, with full notice of our purpose to betray them? . . . I should be damned in time and in eternity for so doing. The world shall know that I will keep my faith to friends & enemies, come what will.”

Lincoln’s refusal to sacrifice racial justice for political advantage seemed to doom his chances for reelection. In effect, he was saying that he would rather be right than be president. In the end, however, he turned out to be both right and president. Sherman’s capture of Atlanta on September 2, and other Union military victories during the fall turned Northern sentiment around by 180 degrees. The end of the war now appeared imminent, not through peace negotiations that would have virtually conceded Confederate victory, but by a smashing Union military triumph. Lincoln was decisively reelected in November, and Union arms secured the unconditional surrender of Confederate armies the following spring.

Several of the essays in This Mighty Scourge explore Lincoln’s leadership as commander in chief, and the strategies of Union military commanders who eventually forged that victory.

James M. McPherson is a leading historian of the American Civil War, and is the George Henry Davis ’86 Professor Emeritus of United States History at Princeton University. He has also authored For Cause and Comrades: Why Men Fought in the Civil War, and Battle Cry for Freedom: The Civil War Era, for which he received the 1989 Pulitzer Prize.