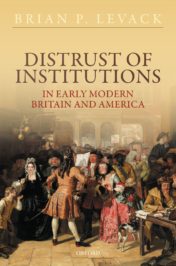 Distrust of Institutions in Early Modern Britain and America

In the past few decades, trust and distrust have become frequent subjects of journalistic and academic discourse. Much of this literature has dealt with the recent decline or loss of interpersonal trust—the faith or confidence we have in the ability, knowledge, or reliability of other people. We have, it seems, become a much less trusting society than in the past.

There has also been an apparent decline of trust in public institutions, most notably governments, but also law courts, banks, corporations, churches, the media, and universities. In some instances, distrust of institutions has led to a loss of trust in entire political, economic, and legal systems. Much has been written about this decline of institutional distrust, but its chronological parameters have been limited to the last few decades. Distrust of British and American public institutions has, in fact, a much longer and more complex history than most academics recognize. I locate the emergence and development of institutional distrust in Britain and America in the early modern period, which stretched from roughly 1500 to 1815.

Trust in institutions is more difficult to build than trust in people we know personally. The reason for this is that the officials who staff central governments, judges of superior courts, directors of corporations, heads of national banks, and high-ranking clerics in national churches are known to most people only by reputation or exposure in the media. Building trust requires frequent interaction between parties, and that is difficult to achieve between the members of local communities and the “strangers” who run large public institution.

Distrust of political institutions arose in England during the seventeenth century, and it was given theoretical expression by John Locke in Two Treatises of Government (1689). In making the case for resistance against Charles II and James II, Locke argued that all government is, or at least should be, based on trust. If the government violates the trust placed in it, the people (who are sovereign) are justified in forming a new government. Locke’s radical argument became an essential tenet of the Anglo-American liberal tradition. It inspired opposition to the Whig oligarchy in early eighteenth-century Britain and it justified the Patriot cause in the American Revolution of in the 1770s.

Distrust of English law courts also developed during the late seventeenth century, mainly in reaction to the common law judges’ coercion of juries and the violation of defendants’ rights in the political trials of political and religious dissenters in the 1680s. The harshness and unfairness of punishments for all crimes also eroded faith in the entire criminal justice system in both Britain and America in the eighteenth century.

The establishment of the Bank of England in 1694 and the growth of the stock market in the early eighteenth centuries cultivated deep distrust of British financial and commercial institutions. That distrust reached a peak in the South Sea Bubble of 1720, the greatest financial scandal in British history, which led to a loss of trust in the government itself as well as the large stock companies that made profits from the scheme. Distrust of national banks became a recurrent source of distrust in the United States, leading to the failure of the first two national banks in the first half of the nineteenth century.

Distrust of established churches led to the temporary abolition of the Church of England and the Church of Scotland in the seventeenth century and to the separation of church and state in the United States in 1791.

While most of the book deals with the distrust of institutions in the early modern period, the final chapter charts the loss of trust in British and American political, legal, financial, and ecclesiastical institutions in the period from 1970 to 2020. This chapter using polling data from both countries to determine changes in the level of trust in government, the courts, banks, corporations, and churches. It also compares the loss of trust in the early modern period with that of the recent past, recognizing the much larger number and greater complexity of present-day institutions. It also discusses, for the first time in the book, distrust of the media, especially the news media, which were in their infancy in seventeenth-century England.  The section on the media emphasizes its recent politization and concludes with a discussion of the Trump administration’s distrust of fact-based bodies of knowledge, especially science, and its broader war against truth itself. These claims against factual knowledge bring to mind the argument of the Scottish philosophers in the eighteenth century who argued that telling the truth was the main condition for trusting other people. That argument remains true today in both Britain and the United States.

Brian P. Levack is John E. Green Regents Professor Emeritus in History at the University of Texas at Austin. He has written widely on the legal, political, and religious history of early modern Europe. His books include The Civil Lawyers in England 1603-1641: A Political Study (OUP, 1973); The Formation of the British State: England, Scotland and the Union, 1603-1707 (Clarendon Press, 1987); The Witch-Hunt in Early Modern Europe (Routledge, 1987); Witch-hunting in Scotland: Law, Politics, and Religion (Routledge, 2007); and The Devil Within: Possession and Exorcism in the Christian West (YUP, 2013). He is also the editor of The Oxford Handbook of Witchcraft in Early Modern Europe and Colonial America (OUP, 2013).