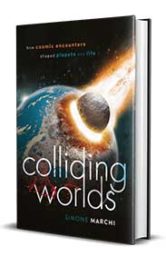 It’s no mystery why the movie industry likes dramatic stories. Certainly, the occasional contemplative movie may achieve critical praise and general acclamation, but a well-written story about death and destruction often carries the day. When it comes to catastrophic events for humans, a big nasty asteroid or comet colliding with Earth tops the chart, and several movies have exploited this scenario. The recent Netflix movie Don’t Look Up did that again, but as a satire and a warning. It is widely considered an allegory for climate change, but let’s consider the astronomical scenario as presented. In the movie, a couple of astronomers serendipitously discover a comet on course to collide with the Earth in about six months, give or take. Is such a scenario scientifically sound?

First, we need to know the orbit of a celestial body, whether asteroid or comet, very precisely in order to establish that it’s highly likely to be on a collision course (99.78% probability, the astronomers claim). The Earth is less than a grain of sand, a mere 12,742 km in diameter, compared to the vast expanse of the Solar System, extending tens of billions of kilometres from the Sun. In the movie, the comet is first seen to pass by Jupiter (say, 1 billion km away). That means the angular precision on the position of the comet needs to be about 10-5 arcseconds – equivalent to seeing a fly from 500 m away. Such precision can’t be achieved with a single observation, even by the most powerful telescopes. That is why astronomers usually need to observe asteroids and comets multiple times over a long interval, typically years. So, the premises of the movie are a bit flimsy.

The other aspect is the size of the object. How likely is it for a 5-10 km asteroid or comet to be hurtling towards Earth? As I discuss in my book Colliding Worlds, collisions have occurred throughout the history of the Solar System. In its heady early days, the Earth and other planets were formed and shaped by massive collisions. Although things are quieter today, we know that asteroids—the rocky leftovers of planet formation found within Jupiter’s orbit—can occasionally skim the Earth. We also know from years of observation that there are very few asteroids close to Earth larger than five km (just 12 to be precise), and none of them has a serious probability of collision with the Earth for hundreds of thousands of years. By then, we would probably have gone extinct through other causes, or left the planet, so we don’t need to worry about these large asteroids. There are plenty of smaller asteroids, but they pose a more limited threat.

Comets, however, as correctly presented in the movie, are a different beast. They are much harder to observe when far away, beyond Jupiter’s orbit. And many of them are parked so far from Earth, in a wide spherical shell called the Oort Cloud more than 150 billion kilometers away, that they are simply not visible to us until they get dislodged and hurtle towards the inner Solar System. The likelihood of such objects colliding with the Earth are very low, but not zero; one in every 500 million Oort Cloud comets is a potential destroyer of life on Earth.

How can we mitigate this cosmic threat from the cold outer reaches of the Solar System? Or the more likely scenario of collision by a smaller asteroid that may not destroy life on Earth but would still be able to cause significant local damage?

Do look up! There is really no other way. Knowledge of how many hazardous objects are out there is the first course of action. The movie highlights and satirizes the tension between scientists trying to present the evidence and politicians more concerned with election prospects and lucrative interests (mining the comet, really?!), and a media too busy feeding celebrity trivia to a public suspicious about science. We know how it’s all going to end. The personal, obtuse interests of the few in power, swayed by the hare-brained schemes of technocrats, will prevail, with little hope for the human race. These are important messages for the failure to tackle climate change. But focusing on the celestial collision scenario, even if all of humanity could come together, would it even be possible to knock an astronomical foe from its course?

There is no way a 5-10 km comet could be deflected. Nor even a much smaller body. We simply do not know how to do this. Several ideas have been proposed, ranging from nuclear bombs to focused solar energy, but without an actual experiment we really don’t know what would work. And consider that building a space mission from scratch to intercept an object would likely require a few years. So, at the very least, we would need to identify a deflection method that works, and then have a spacecraft stand by, just in case. Not to sound pessimistic, but that is where we stand today. Still, it’s not all doom and gloom, and international efforts are under consideration. In October 2022, NASA’s DART mission will send a spacecraft to collide with a small asteroid (not a risk to Earth) and measure the resulting change in its trajectory. If successful, this could be an avenue for future, more capable missions.

The movie ends with a motley crew of rich and powerful humans, including the US president and the creepy tech billionaire who wanted to mine the comet, escaping Earth in a spaceship until, after hibernating in space for 27,000 years, they land on an Earth-like planet where, ironically, dinosaur-like creatures roam free. If the dinosaurs on Earth hadn’t been wiped out 66 million years ago by a large asteroid, giving a chance to early mammals, we wouldn’t be here. So, let’s consider the positive. In Colliding Worlds, I stress that collisions can be constructive too. We owe our existence to a random impact 66 million years ago, and maybe it was the multitude of early impacts that seeded the Earth with the ingredients for life. But all the same, now we’re here, and just in case, do look up!

Dr Simone Marchi is a Principal Scientist at Southwest Research in Boulder, Colorado. His interests cover the formation and geology of the terrestrial planets, the Moon, and asteroids. He is Deputy Project scientist for the NASA Lucy mission, and Co-Investigator of the NASA Psyche mission, NASA Dawn mission, and ESA BepiColombo. He is a member of the science teams of the ESA JUICE and Rosetta missions. Marchi won the international Farinella Prize and NASA's Susan Mahan Neibur Early Career Award for his studies of the impact histories of terrestrial planets and asteroids and early evolution of the Solar System. He is also the recipient of several NASA and ESA mission group achievement awards, and has an asteroid named after him by the International Astronomical Union: Asteroid 72543 Simonemarchi. His work is regularly featured on the news.