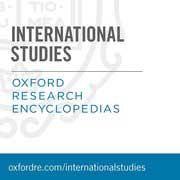 The Oxford Research Encyclopedia of International Studies is part of a major initiative from Oxford University Press to transform its approach to reference publishing in order to better serve the changing needs of university-level digital research.

The ORE of International Studies is currently available via subscription as scholarly articles are gradually added to the site.

In a world affected by brutal civil conflicts, endless proxy wars, violent extremism and warlordism, and now reckoning with the impact of COVID-19, the need to assist vulnerable people will continue to expand. In parallel, the security conditions in which humanitarian workers are deployed and operate in various conflict zones will become an increasingly relevant issue. Although debates among scholars and practitioners are growing, the severity and urgency of the issue continues to be underestimated, particularly at the UN level.

Although it is common to hear about bombings, kidnapping and murder, sexual harassment, armed robbery, and individuals caught in crossfire, incidents reported by non-governmental organisations (NGOs) do not always draw the attention of media and public concern. According to the Aid Worker Security Database, from 1997 to the present, incidents involving aid workers have been frequent and are growing, along with the spread of conflicts and crises. “Humanitarian aid workers” is a broad category, including staff of local and international NGOs, international organisations and the International Committee of the Red Cross (ICRC). Among them, NGO workers, especially local ones, are most often exposed to violence, although UN and ICRC staff have not been exempted.

Humanitarian workers may be involved in generic attacks aimed at civilians, but most often they are victims of targeted attacks and deliberate violent strategies by local non-state armed groups (NSAGs) or more organised groups like Taliban, Al-Nusra, Al-Qaida, ISIS, and Al Shabaab. Such attacks are often instigated because humanitarian workers are perceived as having colluded with the “enemy” and associated with an opposing party. Their presence on-field and their roles in communities can be easily distorted among the local population and manipulated to justify violence against them.

What can we do to protect humanitarian workers?

What can be done to protect them while allowing them to do their jobs even in highly dangerous zones? Humanitarian workers are usually subject to proper training courses and basic knowledge of logistics. Additionally, they are aware of the on-field risk they may encounter. However, this may not be enough to safeguard them and guarantee the assistance they provide to local communities.

The most important factor is understanding the extent to which local conditions either allow their mission with some adaption or become so difficult that they require partial or total suspension. A reduction of activities and personnel may be a common practice in such instances, though this always implies a shift in the approach, which may cause political and ethical issues. The practice of remote management, the operational response to insecurity involves a large reduction of international and sometimes national personnel from the field. It consists of the transferral of larger programme responsibilities to local staff or local partner organisations. This is not always perceived as a productive strategy: it interrupts the direct monitoring of project implementation and coordination that is one of the most important added values aid workers may provide, particularly in those contexts in which local civil society actors are more vulnerable. The partial transferral of tasks may also expand the criticality and sensitiveness of the programmes, reduce the feasibility of technical aspects, and challenge the expertise and availability of local partners. Still, remote management practices are preferred to the complete suspension of activity, a drastic decision that impacts the organisation’s performance and humanitarian work and can be the last resort.

The worsening of security conditions for humanitarian workers is a problem that cannot be definitively solved; it is a consequence of the deep changes that global and regional security are encountering. Multi-layered and complex civil conflicts and proxy wars require integrated humanitarian interventions in which the civilian dimension is dominant. The more humanitarian workers continue to be deployed on-field and involved in various tasks, the less secure their working conditions will be.

Despite the visibility of attacks in media reports, problems encountered by NGOs in conflict zones remain an under-researched and undervalued issue that deserves more attention. More comparative data analysis concerning not only general reflections on the level, cause, and consequences of violent attacks on humanitarian workers but specific contexts and their correlation with the most striking contemporary conflicts is desperately needed to build knowledge and inform policy.

The strengthening of security conditions for all humanitarian workers should enter the political agendas of international and regional organisations and be part of debates on conflict management and external interventions. It should become a concern for all major humanitarian agencies to promote a broader collective reflection on the actual preparation of workers and the dynamics of mission tasks.

Daniela Irrera is associate professor of international relations at the University of Catania. She is the author of "Non-state actors and conflict management in proxy wars" in the Oxford Research Encyclopedia of International Studies, 2021 and "NGOs and Security in Conflict Zones" in Thomas Davies (eds.), Routledge Handbook of NGOs and International Relations, 2019. She is also a researcher with the PROTECT project.