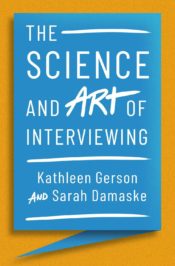 The Science and Art of Interviewing

From scraping “big data” from the internet to the analyzing genomic information about individuals and social groups, today’s researchers have a dizzying array of new methods for studying the social world. One consequence of this explosion of options has been to obscure the value of tried-and-true ones. Depth interviewing is a case in point. Once assumed to be a core research tool, many of today’s researchers have cast a skeptical eye on it. While past debates centered around whether we could rely on insights drawn from a limited number of people, new concerns have arisen from those who advocate direct observation, whether in natural or experimental settings. These skeptics express doubt that social researchers can trust the information gleaned from self-reports, pointing especially to the ways that depth interviewing may elicit accounts that are internally inconsistent or that contradict what people actually do. Such doubters argue that since people are prone to express ideas, beliefs, or behaviors that contradict one another, their self-reports are neither credible nor useful.

These critiques reflect a fundamental misunderstanding about what depth interviews can accomplish and how, when designed and carried out well, they are uniquely suited to gathering crucial insights about the nature of human consciousness and the relationship between thought and action. One-on-one interviewing creates a setting in which the “unobservable” becomes visible. Life history interviews allow people to describe and reflect on how prior experiences have led them to their current circumstances and outlooks, including what key events propelled them to devise life strategies and make consequential life choices. Focusing on the present, depth interviews provide a safe space where people are invited to share their most private experiences, thoughts, and feelings. While it is not be possible to observe a wide range of intimate activities, from sexual encounters to all sorts of dyadic interactions, interviews allow participants to describe and reflect on such events. And whatever the topic, interviews allow people to explore the meanings they attach to their actions and beliefs and to reveal the processes by which their social contexts created experiences that prompted ensuing responses.

Indeed, a key contribution of depth interviewing lies in its ability to uncover the contradictions that people express. Rather than accepting such accounts at face value, our research (and that of many others) demonstrates that we ignore contradictory thoughts and actions at our peril. Contradictory accounts as well as inconsistencies between “saying” and “doing” are central to human thought and action. Depth interviews provide an opportunity to delve into the nature of such beliefs and behaviors and explore the reasons people hold inconsistent views or act in apparently inconsistent ways. In addition to unearthing the meanings people imbue to their contradictory thinking or behavior, interviews can also discover the social contexts that give rise to them. When people express inconsistent beliefs or reveal conflicts between their values and choices, they alert us to look for the social contexts and cultural formations that create conflicts for which there are no simple or straightforward ways to respond.

Given the complexity of twenty-first-century life, it has become even more crucial to understand how people navigate the tensions created by conflicting institutional arrangements. In the context of a rapidly changing world, interviews shed light on the interplay between incompatible options and the evolving responses people craft to cope with them. Paying close attention to the different layers of meaning within each interview and carefully analyzing the patterns that emerge across all the interviewees enables depth interviewers to understand how social structures and cultural schemas shape human endeavors and how, in turn, social actors participate in constructing and potentially changing the world they inherit. By eliciting contradictory accounts and using them to delve into why people hold inconsistent beliefs or act in contradictory ways, depth interviews illuminate complex social patterns that would otherwise remain hidden.

Whether the goal is to chart how structure and action interact as individuals build their life paths, to learn about intimate experiences that cannot be observed, to uncover how people give meaning to their own and others’ practices and beliefs, or to understand how social arrangements prompt people to hold contradictory views and take inconsistent actions, depth interviews are the best, and possibly the only, method for learning about such core social dynamics. When interviewers ask probing questions, listen carefully to their participants’ answers, and analyze their findings with an eye firmly focused on discovering the patterns that emerge from the complex material they gather, interviewing enlightens us about the many dimensions of human experience that cannot be reduced to numbers, biological factors, or observable behavior. As we rightfully seek to expand the social science toolkit, it would be ironic if we lose sight of a method that offers unique access to the hidden dimensions of personal and social life. Instead, we must renew our commitment to a research technique that places human consciousness at the forefront.

Kathleen Gerson is Professor of Sociology and Collegiate Professor of Arts and Science at New York University. Her books include The Science and Art of Interviewing, The Unfinished Revolution, and The Time Divide.

Sarah Damaske is Associate Professor of Sociology and Labor and Employment Relations at Pennsylvania State University. Her books include The Science and Art of Interviewing, The Tolls of Uncertainty, and For the Family.