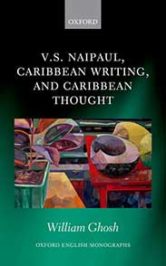 Literature, we’re told, is the immortality of speech, but in fact reputations fade quickly. The work of V.S. Naipaul once drew bombastic statements from large names: “to understand the modern state, we are often told we must read V. S. Naipaul” (Pico Iyer); his “writings are a sort of baseline for thinking about certain things” (Barack Obama); the modern literary public sphere in India “really began with Naipaul” (Amitav Ghosh); “the sweep of Naipaul’s imagination [is] without equal today” (Elizabeth Hardwick); or, from a different perspective, “the most immoral move has been Naipaul’s…” (Edward Said). But today, undergraduates arriving at university are unlikely even to have heard of him. “His equals are Joseph Conrad, Toni Morrison, and John Coetzee,” Homi K. Bhabha writes in the proposal for his new book-in-progress, V.S. Naipaul and the State of Literature. But “V.S. Naipaul’s literary legacy is in danger of being lost somewhere between elegiac celebration and fierce controversy.”

Bhabha spoke to me across the Atlantic, from his home in Cambridge, Massachusetts. My own book on Naipaul, a study of his entanglements with twentieth-century Caribbean writers, artists, and intellectuals, had recently been published, and—a perpetual student of Naipaul’s work—Bhabha had been reading it. “Very thoughtful, beautifully written, very careful,” he said, with smiling understatement, acknowledging that speaking on the subject of V.S. Naipaul can sometimes cause anger and offense. So why do we continue to read, study, and teach him? Why does Naipaul matter today?

A foundational figure in postcolonial theory, Bhabha first read Naipaul as a student in what was then Bombay. He wrote a DPhil on Naipaul’s work at Oxford in the early ‘80s. It started with recognition, he tells me. “When I read Naipaul—particularly the early works—I encounter a vernacularized, provincialized English. That’s the way we often spoke in Bombay. It legitimized that form of writing, and the thinking that goes with it.” With time and careful study, moving onto the denser works of Naipaul’s middle period, he began to see more. “For me,” he says, “Naipaul was a translational figure, moving between the most classical formulations of the English literary canon, whilst at the same time opening windows in the House of Fiction onto the experience of the downtrodden, the marginalized, those whose ambitions so far outstripped their ability to realize them. And yet who held onto them!”

What Bhabha’s essays taught me to see, as a student, was how Naipaul allowed these “translations” of dialogue, setting, milieu, to distort the literary forms he was using. Naipaul’s characters were educated to respect English, yet its grammar became new in their mouths; his narrators have an exaggerated respect for the classical forms of English prose, yet trying to replicate them in colonial settings, they end up refracting them. A House for Mr Biswas, for example, “had the capaciousness of a great bildungsroman, and yet everything about it subverted the traditions of the bildungsroman.” One word Bhabha returns to is “strangeness”: “that enormously educative awkwardness, which was not an awkwardness of style—the work is polished and elegant and brilliant—but rather of concepts. The books are montages of generic fragments, but the sum of the parts provocatively don’t add up to the whole.”

Today, Bhabha’s ideas percolate far beyond literary scholarship. His 1994 book The Location of Culture quickly became a key text for students of postcolonial history, culture, and politics (one bot on the publisher’s website claims 59,351 citations). It is striking how many of the key terms from Bhabha’s later work—ambivalence, vernacular cosmopolitanism—crop up again and again in his discussion of Naipaul. Did this early and diligent study of Naipaul shape his later concepts? “Absolutely,” he says. “Naipaul was the matrix of some of my earliest ideas.” Rebarbative, patrician, wilfully provocative, Naipaul had by this point become a favourite witness for imperial apologists in Britain and American. Bhabha’s interest in Naipaul did nothing to dispel suspicions among some left-wing thinkers that postcolonial theory was not sufficiently politically radical: Brahminical in its interests and expressions, and focused on language and culture at the expense of material inequality. Where Naipaul was concerned, Bhabha admits, “I wasn’t betting on the horse that most people thought would be an important breakthrough for anti-colonial politics. Naipaul had many views that weren’t compatible with anti-colonial thinking. As you know, I didn’t agree with him about many things. Much of my work critiques it. But I felt that the problems Naipaul threw up needed to be explored.”

One problem, I speculate, is that “anticolonial” and “postcolonial” aren’t really synonyms, and postcolonial theory often addresses a specific cultural question. That is, how do we talk about the differential aspects, the strangeness, the points of resistance and awkwardness found in the manners, writings, and ideas of people from the formerly colonised world who were in many ways quite assimilated? “I completely agree with you,” Bhabha says, “and that is the Naipaul predicament, and the predicament of many postcolonial writers. At the time, people were trying to fix people as being either anti-colonial or collaborators. So Naipaul had to be a collaborator. But it was obviously more complicated than that. What Naipaul requires you to do is to live with ambivalence, like Mr Biswas or Ralph Singh, his characters live with ambivalence. They have to tolerate ambivalence as a condition of survival. But in the end, it affords creativity.”

Naipaul has passed away now, but his subjects are still with us. Bhabha describes finding himself in New York with a driver listening to Hindi bhajans (devotional songs). Talking to him, Bhabha realised that the man was not Indian but Trinidadian. “I asked him if he enjoyed the bhajans. He said, ‘Yes, but I don’t understand them. Do you? Could you explain it to me?’’. “I was raised in India to think that people who grew up between languages, between cultures, were really second-class citizens. Even the elites would listen to compilations mostly, a little Wagner, a little Strauss and so on. But what we aspired to was the virtuosity of knowing Wagner entirely, all of it. That’s why Naipaul was important. He said, ‘The mosaic, the compilation, the half-known, the amalgam, this has value in itself. This will be my subject.’ So the taxi driver in New York was quintessentially Naipaulian.”

At the heart of Bhabha’s interest in Naipaul is a vision of cosmopolitanism he derives from Naipaul’s downtrodden characters who, he says “aspire to worldly relations found in the midst of the metropolitan traffic of ideas and images while keeping their eyes trained on an horizon of hope elsewhere. Sometimes the traffic bypasses the island, but the creative imagination refuses to renounce the freedom of writing from elsewhere while never ceasing to recreate the landscape of home.” This is not the cosmopolitanism of the rich, he explains, in which mobile citizens move from one nation to another, mastering the language and national literatures. Rather, it is a non-elite, “vernacular” cosmopolitanism of the migrant, the displaced, the diasporic, living in between languages and cultural traditions, and insecurely—even contradictorily—attached to different visions of culture. “This,” Bhabha says, “is why Naipaul is important today, because he is ambivalent, asymmetric, strange. When everything seems to be going in the other direction.”

Homi K. Bhabha is the Anne M. Rothenberg Professor of the Humanities at Harvard University.

How well do you know your fictional fathers?