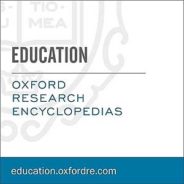 Substantive, peer-reviewed, and regularly updated, the Oxford Research Encyclopedia of Education combines the speed & flexibility of digital with the rigorous standards of academic publishing.

More than half a century ago, powerful civil rights laws brought disabled children into American school systems, breaking down the physical barriers that held these young people at the margins of society. But attitudes towards disability as a devalued limitation persisted, holding social and cultural barriers between disabled and nondisabled people firmly in place. There is, however, an opportunity to use the power of education and learning to reimagine how we design the world.

In 1970, United States public schools educated only one in five students with disabilities, and most states had laws on the books denying children with both physical and developmental disabilities access to mainstream schooling. In 1975, Congress passed the Education for All Handicapped Children Act (EHA) to support states and localities in the public education of students with disabilities. When it was reauthorized in 1990, EHA was renamed the Individuals with Disabilities Education Act (IDEA). As a millennial born in 1984, IDEA afforded me, a blind kindergartener, the right to attend my local public school. I was born with a degenerative eye condition that meant I would have night blindness my whole life, and gradually lose my daytime vision as well.

By 2016, 95% of children 6-21 who were eligible for services under IDEA were spending at least some part of each school day in a mainstream classroom. This was a huge leap forward but was happening in the absence of a major culture shift—even though more and more disabled children were joining classrooms, disability was absent from the curriculum. For instance, no one—not my parents, my teachers, my classmates, or myself—referred to me as “blind.” We often referred to my “eye problem,” or said that, “I couldn’t see in the dark.” There was no vocabulary to describe my sense of difference, though it was deeply felt.

In school, I did wear glasses, but none of the trappings of blindness—the white cane, the Braille business cards—those would come later. Still, I was the source of relentless bullying. I recall dreading mundane things like accidentally dropping my pencil on the ground, as I’d have to kneel down, in a cold sweat of shame, as the boys in the class taunted me, calling me “blindy” as I traced my fingers across the floor to locate my fallen writing implement. This was all because none of us knew better—because, for centuries, disabled children were bundled away and corralled inside institutions, while nondisabled children were taught to fear and underestimate them. These deeply-engrained fears of disability still exist in the present day and are acted upon in ways that harm disabled children.

Though there are only 10 US studies linking disability to bullying in school, according to one study from 2009, disabled children were two to three times more likely to experience bullying than their nondisabled peers. A more recent 2019 analysis from the National Center for Educational Statistics    found that, alongside physical appearance, race/ethnicity, gender, sexual orientation, and religion, disability was among the most common reason for bullying reported by students. Negative outcomes of bullying include lower performance in school, greater absenteeism, and lower graduation rates, among others.

This data comes as no surprise to me, as it reflects my own childhood. And this is how schools perpetuated a culture of ableism—and it took powerful civil rights laws to achieve the simple step of giving disabled children access to the same educational opportunities as their nondisabled peers.

Thankfully, for a new generation of disabled students, this reality is changing, and we can begin to see a world remade by people who will grow up immersed in disability-positive education.

Organizations like Disability Equality and Education in Pennsylvania are developing disability-positive curricula that teach children about various forms of disability, as well as how to honor and respect the differences that make us all whole and human. Disabled authors are publishing children’s books like We Move Together and Rolling Warrior that further reinforce these ideas. Films like Crip Camp are being used in schools to tell stories of the disability civil rights movement. These are the narratives that I had to seek out in my adult life, that will no longer be invisible for the next generation of disabled youth.

And this is just the beginning. States, localities, and school boards must demand that disability become part of the K-12 curriculum. Students who, because of IDEA, have the opportunity and the right to learn alongside their nondisabled peers should see themselves in the education they receive. And they shouldn’t be alone in these discoveries—nondisabled children should be right there with them, building disability consciousness and finding creative ways to work together to ensure everyone is included in every aspect of life. If this becomes the foundation, a child who grows into an architect is less likely to forget to build that ramp and make it beautiful; a high school student who becomes a doctor is more likely to show compassion and provide accommodation to a disabled patient; and a nondisabled government leader is more likely to consider disability issues when designing public policies. Even after the harms of bullying and the loneliness of exclusion, I believe this new world is possible because knowledge is a powerful tool to repair our entrenched fear of otherness.

Qudsiya Naqui is a blind attorney and disability justice activist based in Washington DC. Her work as a lawyer centers on access to justice—ensuring that all people, especially disabled people and other marginalized groups, are treated fairly in the legal system. She also hosts the podcast, Down to the Struts, about disability, design, and intersectionality. Her work has been featured in Forbes Magazine, NBC Today, and the Disability Visibility Project Blog.

How to rate and rank potential doctoral students