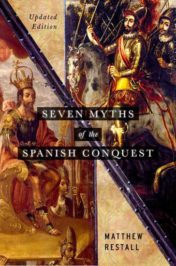 13 August 2021 marks the moment, exactly five hundred years ago, when Spanish conquistadors won the battle for Tenochtitlán, completing their astonishing conquest of the Aztec Empire, initiating the three-century colonial era of New Spain. At least, that is the summary of the event that has since predominated. In recent decades, scholars have developed increasingly informed and complex understandings of the so-called Conquest, and opinions in Mexico itself have become ever more varied and sophisticated. And yet, wherever in the world the Conquest of Mexico is referenced, the essential précis and meaning of what happened on 13 August continues to correlate closely to the opening sentence above.

That sentence, however, is highly misleading. In fact, I would argue that it is plain wrong. Its distortions are many, but I shall here outline three that are arguably the most common misconceptions or myths surrounding 13 August 1521.

Myth one: all of the attackers were Spanish

Consider this stunning fact: during the siege of Tenochtitlán, less than 1% of the attackers were Spaniards. It takes a huge leap of imagination, and an equally large dose of prejudice against Indigenous Mexicans, to see the siege as simply Spanish—and therefore the surrender of the city’s resisting residents on 13 August as a Spanish accomplishment (either glorious or shameful).

That non-Spanish 99+% of attackers was highly varied, including African and African-descended soldiers, Taínos and other Indigenous Caribbean support personnel enslaved by Spaniards, Totonacs and other Mesoamericans. But the majority were Nahuas, most famously long-term opponents of the Aztecs such as the Tlaxcalteca, and most of the attackers were Nahuas who were Aztec subjects; indeed, if we classify as “Aztec” anyone from the three city-states that controlled the empire (sometimes called the Triple Alliance), then a significant percentage of the attackers were Aztec.

That percentage varied over the months of the siege. For example, when, during one intense battle at the city’s edge at the end of June, the empire’s defenders killed over a dozen Spaniards and captured 68 of them (roughly 10% of the company at that moment), executing them atop the Templo Mayor, tens of thousands of opposing Aztecs (or, to avoid confusion, ex-Aztecs) returned to their families and fields in and around Tetzcoco, Chalco, Cholula, and dozens of other hometowns. But the defenders were also battling starvation, smallpox and other diseases, and the crippling misery of seeing family members of all ages dying cruel deaths—all while the attackers rampaged house-to-house across the island. So, in July 1521, when the defenders were forced to retreat to the Tlatelolco district of the island—with the attackers entering the great market square there on 1 August —those Nahuas (ex-Aztecs included) returned in droves to participate in the siege’s destructive climax.

The point here is not to diminish the impact of the Spanish invasion; prior to the start of the siege, Spaniards had spent much of their two years in Mexico inflicting massacres, slave-raids, and other forms of family-destroying violence upon the Indigenous population, creating the massive disruption that led to the siege. But the siege itself—like the war—was a Mexican tragedy, not a Spanish military action against the Aztec Empire.

Myth two: the Spanish Conquest ended with the Fall of Tenochtitlán

Let us upend the assertion that the Conquest ended on 13 August and was followed by the colonial period. Instead, the Spanish conquest and the subsequent colonization began on 13 August . At the moment when Cuauhtémoc, the last Aztec emperor or huey tlahtoani of Tenochtitlán, surrendered to Spanish captains, the empire was fragmented and in disarray, with two city-states, Tetzcoco and Tlaxcala, poised to consolidate regional power; Mexico was very far from being under the control of the one thousand Spaniards present at the end of the siege. The Aztec Empire was partially destroyed from within in 1520-21, then partially resurrected by the Tetzcoca and other ex-Aztecs, before slowly transmuting over decades into New Spain.

Likewise, the invasion wars were far from over. For another 26 years after Tenochtitlán’s siege, military campaigns were fought in and adjacent to the former Aztec Empire by Spanish conquistadors, who continued to be outnumbered by Nahua and other Mesoamericans fighting alongside them. If we must assign specific dates here, I would argue that “the conquest period” was 1517-1547 and “the colonial period” was 1547-1821.

Myth three: the Conquest was an “astonishing” achievement

I deliberately included the adjective “astonishing” in the opening sentence, to reflect the persistence across five centuries of the conquistador claim that their “conquest” was an astounding achievement. In accounts designed specifically to be self-promotional, veterans of the war marveled at their own against-all-odds triumph, a spin further embellished by royal chroniclers, whose task was specifically to promote the glory of imperial Spain. How did they explain it all?

“The siege of Tenochtitlán was a vicious dénouement to a war filled with cruelty and suffering. After five hundred years, it is time to stop that violence from continuing to resonate through how we view the Aztecs and other Indigenous American cultures.”

By an intertwined trio of “facts”: God was on the side of Spanish Christians; Spaniards were an indomitable people “in the habit of winning” (as Cortés put it); and the individual conquistador writing (or being written about) was driven to superhuman feats by his deep loyalty to the Crown. Underpinning those “facts” was a prejudicial view of Indigenous cultures in general and of the Aztecs in particular. Condemning the Aztecs as duplicitous, blood-thirsty barbarians was crucial to justifying the violence of the invasion war—a smear tactic that was also applied to Nahua allies, whom the Spaniards blamed for the brutality of the siege. But emphasizing the fearsome militarism of the Aztecs also served that primary Spanish propaganda goal—the promotion of “the Conquest” as an extraordinary accomplishment.

While the Spaniards’ own explanations for the fall of the Aztec Empire have receded in time, the negative depiction of the Aztecs has persisted; more than that, it has flourished. The popular image of the Aztecs worldwide, perpetuated in online media, textbooks, video games, and film, is that of the skull rack and the rituals of “human sacrifice” (itself a phrase laden with the baggage of racist colonialism). Yet Aztec civilization was as rich and deep as that of any Europeans in the 15th and 16th centuries, no more militaristic or bloody (and arguably less so).

The siege of Tenochtitlán was a vicious dénouement to a war filled with cruelty and suffering. After five hundred years, it is time to stop that violence from continuing to resonate through how we view the Aztecs and other Indigenous American cultures.

To learn more about the latest scholarship on the fall of the Aztec Empire, join Matthew Restall, Stefan Rinke, and Camilla Townsend for a roundtable discussion 11 August. Register for the event now.

Matthew Restall is the Edwin Erle Sparks Professor of Latin American History, Women's Studies, and Anthropology and Director of Latin American Studies at Pennsylvania State University. He is the author of numerous books, including The Conquistadors: A Very Short Introduction (OUP, 2012), and Seven Myths of the Spanish Conquest (OUP, 2021).