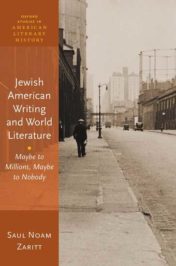 Jewish American Writing and World Literature: Maybe to Millions, Maybe to Nobody

Antisemitism has been increasingly in the headlines, from reports of violent incidents directly targeting Jews to the growing prominence of ethnonationalist discourse that makes frequent use of Jewish stereotypes. This surge in anti-Jewishness includes renewed attention to the medieval image of the wandering Jew, translated into contemporary parlance with the term “globalism.” Conservative activists see the interconnected globe as a threat to traditional social structures, and as directly linked to diasporic Jewish thought, politics, and culture. For these conspiratorial thinkers and their political representatives (from Viktor Orban to Donald Trump and beyond), Jewish worldliness serves as a menacing foil to the violent reactionary politics of contemporary nationalism.

It would be tempting to dismiss such ideas as uninformed distortions of Jewish culture and history. One could point to examples of Jewish patriotism or to various forms of Jewish nationalism that even share a disdain for “globalism.” Indeed, many argue that Jewish communal life is unfairly targeted and that Jews belong to a minority group not much different from any other. However, these defenses are often articulated by those who would simultaneously emphasize the unique suffering of the Jewish people throughout global history and tout the particular achievements of Jewish genius. This can easily devolve into something of parlor game of counting good Jews and bad Jews, good global citizens and bad globalists. The refutation of stereotypes often serves to strengthen them: these particular Jews are “normal,” but the seemingly timeless idea of the Jew remains steadfast.

It may be useful then to think with the stereotype rather than against it. What does it mean to think of the world “in Jewish”? What might a vocabulary of Jewish worldliness reveal about the global present?

“What might a vocabulary of Jewish worldliness reveal about the global present?”

An exercise in translation might be helpful here. The word “world” comes from the German Welt, which combines the Latin vir with the Germanic alt to mean “the age of humanity.” Over time, this temporal designation gave way to a spatial one, as Welt came to refer to the space in which humanity exists. Welt thus produces a confluence of time and space, marking the capacity to measure history and memory within a knowable realm of human existence. So something like “world literature” would indicate the attempt to conceive of all of literature, across languages and across space and time, within a system of cultural exchange.

The translation of “world” into Hebrew produces a similar confluence, though with a more explicitly redemptive horizon of meaning. The Hebrew for “world,” olam, as found in the Bible, rarely if ever actually means the physical world. It initially denotes the long duration of existence, both human and divine, transcendent and mundane, future and past. The phrase brit olam means a divine covenant for all time; metey olam refers to those that have been long dead. The term only takes on the more widely known (and more modern) meaning of the physical world in post-biblical literature where there remains an uneasy convergence between the concrete and the spiritual: to live in this world, ba’olam haze, in a profane world of experience, and to strive to gain entrance into the messianic world-to-come, olam haba, the world of eternal transcendence. Thus, in Jewish tradition, from biblical to rabbinic sources, a person exists under the demands of opposing yet complementary “worlds”: human and divine, transient and eternal, circumscribed and boundless. A Hebrew world always reaches toward a messianic horizon. To return to the world literature example, a literature of olam would be one marked by eternal and redemptive aspirations. This ends up being a rather familiar definition of world literature, indicating those texts judged to have accessed some universal standing, above and beyond any specific cultural origin.

Something else happens though when we turn to a different Jewish vocabulary: what does it mean to think of the world in Yiddish, the 1000-year-old vernacular of Eastern European Jewry? Yiddish is a fusion language, its Germanic shell incorporating vocabularies and grammatical structures from Hebrew and Aramaic, along with Romance languages, Slavic languages, internationalisms, and other languages. The German Welt is perfectly at home in Yiddish as velt. As a result of Yiddish’s multiple language components, a given concept may be covered by several words, in particular the doubling of a Germanic word with a Hebraic one. Thus, Yiddish has olam in addition to velt. As is common in such borrowings, a third horizon of meaning appears in the gap between the languages. In Yiddish, olam, pronounced in an Ashkenazi accent as oylem, retains all of its Hebrew meanings but also enjoys a supplementary one—audience or crowd. In Yiddish, designations of time and place, sacred and profane, this world and the next world, are constrained by the immediacy of an oylem.

“When we translate “world” into Hebrew and Yiddish we realize that there is a constant struggle to determine in what worlds and in whose worlds a text belongs and how various worlds interrelate and overlap, if at all.”

In this translation, many of the metaphysical and theological significations of the world become secondary. Oylem limits our understanding of the world to that which is determined by concrete human activity. Oylem literature isn’t some universal group of texts, but rather that which is determined by the shifting needs of actual readers. Simultaneous to the world’s proposed status as a system of exchange or a mode of transcendence, there persists underneath a world of human judgment and institutional action: a set of people in a room deciding whether to clap or not.

Taking these translations together, Jewish worldliness does not necessarily connote a nefarious plot to control the global economy, nor does it require messianic longing for a borderless utopia. Certainly, these meanings persist—but they also run up against a vernacular remainder. When we translate “world” into Hebrew and Yiddish we realize that there is a constant struggle to determine in what worlds and in whose worlds a text belongs and how various worlds interrelate and overlap, if at all. Thinking of the world as oylem introduces a translational limit: the promise of a single organizing structure—the cohesive map of the world’s cultures, the conspiracy theory that explains everything—must encounter concrete empires of culture and all that is untranslatable about human community. Oylem allows us to imagine the possibility of planetary human connection while acknowledging the challenge and vitality of difference.

Featured image from the cover of Jewish American Writing and World Literature: Maybe to Millions, Maybe to Nobody by Saul Noam Zaritt.

Saul Noam Zaritt is an Associate Professor of Yiddish literature at Harvard University. He studies modern Jewish writing and the politics of translation, examining how writers move between cultures and across boundaries to reimagine the languages of Jewish experience. His scholarly work has appeared in the journals Prooftexts, Studies in American Jewish Literature, and American Literary History. He is a founding editor of In geveb, an open-access digital journal of Yiddish studies.

Zaritt is the author of Jewish American Writing and World Literature: Maybe to Millions, Maybe to Nobody (Oxford 2021), published as part of Oxford Studies in American Literary History.

Extraordinary times: revisiting the familiar through the novels of Marilynne Robinson