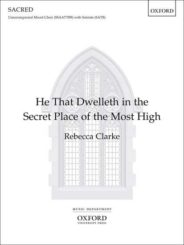 He That Dwelleth in the Secret Place of the Most High

Rebecca Clarke (1886-1979) is most commonly known as a violist and composer, in particular for her famous Viola Sonata (1919), which has remained one of the most significant in the instrument’s repertoire since its composition. Her Shorter Pieces for viola and piano, as well as a number of solo songs, have gained increasing recognition since the turn of the millennium, as more of her music has begun to be published and researched.

Clarke’s choral music remains less well-known. She was, however, composing choral music from her earliest studies at the Royal College of Music, as Charles Stanford’s only female composition student, right up to 1944, before she stopped composing almost completely for the last 35 years of her life. She worked alongside some of the most influential English choral composers of her day, singing in a choir at the Royal College under the direction of Ralph Vaughan Williams, alongside George Butterworth and Gustav Holst, and with Hubert Parry even sponsoring some of her tuition. Her choral music weaves together influences from many of these composers, while maintaining her own characteristic style.

Clarke’s earliest choral works draw influences from old English forms such as the madrigal, glee, and part-song, which were undergoing a revival during the early twentieth century, as part of the “British musical renaissance.” Pieces such as Lover’s Dirge and When Cats Run Home and Light is Come, which set texts by Shakespeare and Tennyson, are inspired by the old English ‘madrigal’ form, while Now Fie on Love, her earliest work, is described by Christopher Johnson as a “rapid-fire glee.”

During the 1910s and 20s, Clarke began to develop a more distinctive style in her choral music. Works such as My Spirit Like a Charmed Bark Doth Float and Music When Soft Voices Die are in some ways reminiscent of some of Parry’s Songs of Farewell, in their ebb and flow of expressive textures and dramatic interpretation of the text, but are characterised by Clarke’s signature chromaticism and harmonic shifts. Philomela sets another beautifully expressive text, telling the Greek myth of Philomela from the perspective of her sister Procme, and conveys the narrative through deft changes in texture and harmony.

When she came to write her first sacred setting, He that Dwelleth in the Secret Place of the Most High, Clarke was much more comfortable in the medium, writing in her diary how exciting she was finding this particular setting. Powerful climaxes on passages such as “a thousand shall fall at thy side” convey real drama, giving way to lighter, more peaceful harmonies on “There shall no evil befall thee.”

During the 1920s, Clarke’s choral composing seems to have given way to her increasingly demanding performing career. Clarke was one of the most prominent English violists of her day, performing with musicians such as Pablo Casals, Jacques Thibaud, Artur Rubinstein, and Myra Hess, and had been among the first women to be (controversially) admitted to Henry Wood’s Queen’s Hall Orchestra in 1913. Towards to end of the 1920s, however, she returned briefly to the old English forms that had sparked her interest in choral composing. She arranged a few of her solo vocal works for choir—Weep you no more, sad fountains, inspired by Renaissance lutenist and composer, John Dowland, and the lilting Come, oh come, my life’s delight—as well as writing a new arrangement of the fifteenth-century English carol, There is no rose.

Clarke’s final two choral compositions, Ave Maria (1937) and Chorus from Shelley’s Hellas (1943), are both scored for upper voices. Marin Ruth Tollefson Jacobson suggests that her decision to focus purely on women’s voices may have reflected her growing interest in supporting women musicians and composers in later life. While earlier in her career Clarke was involved in the newly founded Society of Women Musicians (1911) and was an advocate for women musicians to receive equal opportunities and rights as their male counterparts, she was often less outspoken than some of her contemporaries, such as Ethyl Smyth, and was adamant that composers be judged solely on merit above all else. In later life, however, as she reflected on her career and her decision to use the male alias “Anthony Trent” for some of her earlier compositions, Clarke seems to have acknowledged some of the barriers she faced due to her gender, remarking wryly how on occasions critics seemed to prefer the pieces by “Anthony Trent” to the pieces by Rebecca Clarke.

Regardless of the motivation behind her choice of scoring, these final pieces seem a fitting culmination of her compositional style, with the mix of inspiration drawn from Renaissance music alongside impressionistic, chromatic harmonies, and an incredible sensitivity to text.

Claire Watters is the Marketing Assistant for Sheet Music at Oxford University Press.

A Q&A with composer Becky McGlade