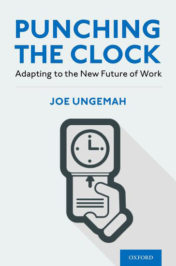 This past month marked an anniversary like no other. On 11 March 2020, the World Health Organization declared COVID-19 a pandemic and with it, normal life of eating out, commuting to work, and seeing grandparents came to a sudden halt. One year later, my new book about the intersection of psychology and the workplace was published. With wide-scale vaccinations on the rise, I thought it would be a good time to take stock of where we are and just how much has changed.

Even before the pandemic, major shifts in how employees think about and interact with their workplace were well underway. Routine tasks were increasingly handed over to automation, such that workers could concentrate on more complex or valuable activities. Employees were being shuffled into new environments guided by activity-based working, with neighborhoods and open-plan floor plans replacing traditional cubicles. Gig working was on the rise and self-employed side hustles were becoming the norm.

COVID-19 added fuel to the fire. During the pandemic’s peak, approximately 30% of employees were working from home, while internet use surged by up to 30% of pre-pandemic levels, as workers competed for bandwidth with their kids who were now thrown into distance learning. Social collaboration tools, like Zoom and Teams, found the footing that they were searching for and quickly became the default means of working with peers and customers.

Even though employers made swift and effective adjustments, the pandemic unearthed social inequalities that were bubbling under the surface. Whereas over half of information workers in the US (e.g. consultants or managers) had the luxury to stay safe by working from home, only 1 in 20 service workers could do the same. These workers were tied to their physical workplace, making cars, cooking food, or cleaning hospitals, and often represented people of color. They bore the brunt of the sudden lockdown in normal life, having to both put themselves at risk and be left without the tools to work in any other way.

With sustainable progress towards an end to the pandemic in sight, employers have already made decisions that will have lasting effects on the workplace. Remote working has proven both feasible and effective for even the most skeptical companies, resulting in many employers encouraging hybrid working. Exactly what this means is still up in the air, even for Big Technology. Twitter and Spotify have vowed to make remote working indefinite, while Google requires employees who plan to spend more than 14 days at home annually to apply for special permission. Somewhere in between are Facebook, Salesforce, and Amazon who have all stated support for a hybrid model.

The offices that employees are returning to will also look and feel different. This past year has given employers the rare opportunity to reassess their real estate portfolio. For example, companies like Target have recently announced a reduction of their office footprint, anticipating lower utilization due to hybrid working. When they do come in, workers will be there to collaborate with peers, access tools and technology, or simply meet up as a team. What is increasingly off the menu is the solitary, heads-down type of work that was typically done in a cubicle.

“As we enter this new Future of Work, the same psychological tendencies that have always governed our work behavior will undergo a period of adjustment.”

To date, much of the shift to the Future of Work has been unidimensional, by tackling the physical workplace. What lags behind is a new set of behaviors and social norms that will help guide employees about how and when they should interact with their new workplace.

For example, video conferencing breaks down the separation between home and work life. Catching a glimpse of a curious four-year-old popping up on screen or spotting laundry that has yet to be put away creates unintended and possibly inappropriate intimacy. Whereas, choices about when to turn on the camera and what hours are truly off-limits have yet to fully work themselves out.

Just like the tangible office, effective remote working will be made possible by a range of behaviors and social norms that interplay with the motivations, needs, and desires of employees. Wearing a suit while on camera not only looks odd, but plays against our desire for being comfortable at home. There is a competing interest between looking professional and feeling comfortable, with the answer resting somewhere between formalwear and pajamas.

As we enter this new Future of Work, the same psychological tendencies that have always governed our work behavior will undergo a period of adjustment. Drivers like identity, reward, and obedience are all still in play, but will take on a distinct flavor as we migrate to a new way of working. Building rapport on Zoom is different than sitting down for a meal, just like observing job performance in person benefits from a degree of constant visibility that will go missing with remote work. Following the pandemic, there is little doubt that the workplace will fundamentally change; the question is how and when the psychology of workers will catch up.

Read a free chapter on “Connection” from Punching the Clock, freely available until 13 May 2021.

Joe Ungemah is registered psychologist, Principal at Ernst & Young LLP, and author of Punching the Clock: Adapting to the New Future of Work (Oxford University Press, 2021) and Misplaced Talent: A Guide to Better People Decisions (Wiley, 2015). Ungemah's work seeks to make connections between the psychology underlying human behavior and the social world we live in, translating scientific theory into simple and straightforward insight that can be applied in the workplace and beyond. After studying and working in the UK, Ireland, and Australia, he now lives in Minneapolis, US.