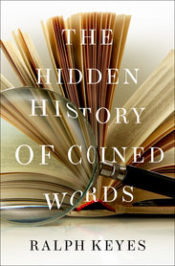 The Hidden History of Coined Words

Successful word-coinages—those that stay in lingual currency for a good, long time—tend to conceal their beginnings. In The Hidden History of Coined Words, author and word sleuth Ralph Keyes explores the etymological underworld of terms and expressions and uncovers plenty of hidden gems; knickers, for example, resulted from a hoax; big bang from an insult. Casual wisecracking produced software, crowdsource, and blog.

Surprised yet? Take our quiz and see how many hidden histories you know!

Ralph Keyes' seventeen books include The Post-Truth Era, which was cited by Oxford Dictionaries as the primary source of post-truth, their 2016 "Word of the Year." Keyes also wrote Is There Life After High School?, which inspired a Broadway musical. His other books include Euphemania, The Courage to Write, and Chancing It, a New York Times Notable Book of the year. Keyes has appeared on Oprah Winfrey, The Today Show, The Tonight Show, ABC World News Tonight, and 20/20. He's been interviewed on NPR's "All Things Considered," "On the Media," and "Fresh Air." His articles have been published by GQ, Good Housekeeping, Esquire, Glamour, Newsweek, Parade, Sports Illustrated, Harper's, and The American Scholar, where he also wrote a column on language. Several essays by him have been deemed "Notable" by the annual compilation of Best American Essays. Keyes lives in Portland, Oregon, with his wife, Muriel.

Table talk: How do you pay your dues?