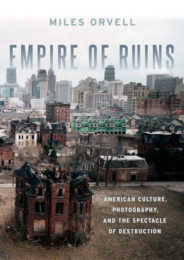 Empire of Ruins: American Culture, Photography, and the Spectacle of Destruction

The visible ruins of our cities have often been in neighborhoods distant from the vital central areas where people shop, go to cultural events, and gather in restaurants. In these central areas, a vacant store here and there is considered temporary—a matter of weeks or months perhaps— part of the natural ebb and flow of the city’s culture and economy. The expectation is that a replacement will arrive soon enough and rent-values will remain more or less stable. These assumptions and expectations may all become obsolete, with little relevance to our futures in the post-COVID-19 world.

We are in the midst of a Covid economy that has decimated the cities of America, with similar effects around the globe. The ability of cultural institutions, retail stores, and restaurants—which traffic in real, not virtual, people—to survive this assault cannot be assumed. In fact, many restaurants despite a variety of inventive strategies, such as”Cocktails-to-go” and “bake-at-home cookies”, have had to shut off the gas and lock the door. Streets once filled with bustling retail stores now seem like ghost towns, in the face of increased Covid e-shopping. Performance groups—dance, music, theater—and their material houses, may have a slightly stronger institutional survival plan, given their governing boards and donors, but personnel have been without work for nearly a year, even as they must stay in shape in order to maintain their presence when things do open up again. Can we even assume that the world “outside” will remain attractive, after this long habituation to the reclusive pleasures of home entertainment? What might the effects of diminished attendance be on fragile arts and performance groups?

There are many unknowns ahead of us, and meanwhile the slow cascade of business failures continues steadily. While those lucky enough to be working from home have been doing OK—psychological costs aside—those who depend on an audience or “real” people, have been suffering most. Where will the capital and initiative to open new businesses come from  after we tame the virus? We face not only the loss of a cohort of performers and restauranteurs, but the loss of the younger people they would normally be training.

The ripple effect of the Covid economy is already visible in the material fabric of our inner cities. Walking down streets that show the signs of desertion and retreat, empty shops and restaurants, we can’t know how long it will be before life as we knew it might return. And what about the inner city office buildings, where companies are discovering they may not need quite as much square-footage in real-estate as they once assumed, that many jobs can be sustained by working at-home. As office buildings increase their vacancies, as mortgages fall due, we may begin to see yet another delayed effect of Covid, visible in decaying and deserted buildings that have housed a sector of the economy that on paper is doing well right now.

The ruins of the city in the post-Covid economy will change the urban experience in fundamental ways, diminishing density and therefore the liveliness of the inner city. Abandoned shopfronts are already becoming the new blight of the city. We have been right to worry about the terrible (and to some extent avoidable) loss of lives, the sickness and suffering, the devastation of families. But we also need to look beyond—hopefully in a post-Covid world of vaccination and sustainable health—to the physical structures that have defined our cities and that are becoming emblematic ruins of the past year.

Anticipating these needs is essential, and it is the responsibility of cities to create task forces to analyze the best ways of restoring the material remains of our urban areas, before they become the literal ruins of the future. We have been rebuilding ruined cities in the United States since the Civil War, cities that have sustained the brutal destructions of war; or the collapsing walls produced by earthquakes, floods, fires;  or the catastrophic loss of industries that have been driven to new (and cheaper) labor markets. These efforts at rebuilding have been successful when the civic spirit is determined and optimistic, willing to invest labor and money.

The post-Covid ruins will be subtler, but persistent and visible. Unlike a flood or conflagration, which creates universal woe, the post-Covid city will have divided its suffering unequally–some wiped out, unable to start again, others riding a wave of economic security. But even those with healthy stock portfolios may find themselves walking the streets of a seriously damaged city.

It’s essential for us all to recognize that we’re in this together and to support local and national efforts to rebuild, on the basis of a unified public consciousness that has been markedly absent from our divided nation in recent years. Cities and states will need to gather intellectual forces and incentives, but the Federal government will have an equally important role in providing funding and the expertise needed to support the private market during these years of planning and rebuilding.

The first step is to identify the problem and name it as a cause, making it a “thing” to be anticipated. We might call it: Rebuild Urban Infrastructure Now—with the acronym starkly reminding us what the alternative is.  If we want to live in a post-Covid future with lively public spaces and a sense of community, we will need to invest locally, unglue ourselves from the screen, and rediscover the pleasures of human society.

Miles Orvell is Professor of English and American Studies at Temple University. He is the author of The Real Thing: Imitation and Authenticity in American Culture, 1880-1940, American Photography (OUP, 2003), and The Death and Life of Main Street: Small Towns in American Memory, Space, and Community. Orvell received the Bode-Pearson Prize for lifetime achievement from the American Studies Association. His most recent book, Empire of Ruins published by Oxford University Press explains the profound cultural impact ruins have on the American psyche.

Let’s raise our taxes! Infrastructure and the American character