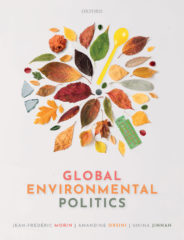 Global Environmental Politics: Understanding the Governance of the Earth

The difference between policy responses to COVID-19 and to environmental crises is striking. When faced with the pandemic, governments around the world (with a few notable exceptions) adopted draconian measures to limit the disaster. These measures are not inconsequential: it will take years to reduce unemployment and the public debt. Yet, they were sacrifices considered necessary to protect public health.

Environmental crises are not tackled with the same aplomb. Just like the pandemic, pollution causes different kinds of damage, which cannot be expressed with a single measure. As we are now used to evaluating the severity of a crisis in terms of the resulting death toll, we should bear in mind the following indicator: according to the World Health Organisation (WHO), COVID-19 will cause almost 2 million deaths in 2020; again according to the WHO, different forms of pollution cause over 12 million deaths per year. Reducing the huge death toll caused by pollution is feasible without triggering a major recession, like the one that COVID-19 has plunged us into. Yet, for decades, environmentalists have been told that environmental measures must be moderated to avoid destabilising the economy.

There are clearly double standards. Why do governments refuse to invest as much in the environment as they are prepared to invest in the fight against COVID-19? Our perceptions of crises are influenced by four types of bias.

The first bias is the identification of victims. COVID-19 victims can be easily identified, whereas, the victims of pollution cannot. Pollution’s effect on public health is diffuse and causes “statistical victims.” Although we know that atmospheric pollution increases the frequency of heart failure and pulmonary diseases, causing a further 7 million deaths each year, it is difficult to determine which specific individual was saved because of the absence of pollution. The same applies to victims of polluted water, ozone depletion, and climate change. Establishing the causal link between pollution and mortality is easier statistically for an entire population than it is medically for a specific individual. When there is no clearly identifiable victim and just cold statistics, it is difficult to feel empathy and be moved by the effects of pollution.

“Why do governments refuse to invest as much in the environment as they are prepared to invest in the fight against COVID-19?”

The second bias is socio-economic. Both COVID-19 and pollution have a disproportionate effect on the most vulnerable populations. However, COVID-19 is more of a threat to the elite than pollution. The virus has affected powerful heads of state and wealthy business leaders. On the other hand, climate change and biodiversity loss do not threaten the elites directly. Since the elites have a privileged voice in public debates, their interests are over-represented.

The third bias is spatial optimism. We are under the false impression that environmental crises occur in remote countries. Europe and North America were also victims of this bias with COVID-19 in January and February 2020, when the epidemic appeared to be limited to Asia. In March, however, countries around the world were forced to acknowledge that they would not escape the pandemic. However, many of us are still lulled into the false sense of security that we are left more or less unscathed by the damage caused by pollution.

The last bias is temporal. The pandemic was sudden and called for emergency measures. In contrast, environmental crises have been reported for decades. Too often, they are seen as upcoming events, rather than disasters unfolding before our very eyes. Consequently, we have grown used to the bleak predictions made by environmentalists. In fact, they are now part of the background noise in public debates. Although environmental degradation calls for immediate corrective action, it is no longer perceived as an emergency. It has now become our new normal.

The experience of COVID-19 has shown that environmental protection is not just hindered by economic obstacles, but also by misperceptions. To correct the four different types of bias, greater visibility should be given to the real and immediate victims, people like us, people we are close to. Environmental action is not just for polar bears, future generations, or remote climate refugees; it is a matter for us as well.

Jean-Frédéric Morin is Full professor, Université Laval (Québec City) and Canada Research Chair in International Political Economy. He is co-author of Global Environmental Politics: Understanding the Governance of the Earth, published by OUP in 2020.