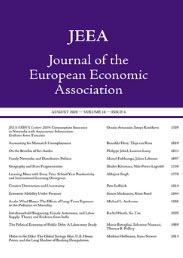 Why do some individuals move to another country, while others don’t? This question is fundamental because it has important implications for the characteristics of migrants (vis-à-vis natives), for the speed of integration of migrants into the destination country’s labor market, and, more generally, for the impact of migration on the sending and destination country.

In his seminal 1987 paper, George Borjas argues that individuals decide whether or not to migrate by comparing the income they expect to earn at home and abroad. Since skills are an important determinant of income, individuals allocate their skills to the country where these skills are rewarded the most. One implication of the Borjas model is that migrants who move from a country with high returns to skills to a destination with low returns to skills should have lower skills than individuals remaining in their home country—that is, migrants are negatively selected on skills from the sending country’s population. However, empirical studies show that individuals migrating to OECD countries are typically more educated than non-migrants (i.e., positive selection on education), even though many come from (developing) countries where returns to education exceed those in the OECD. This is at odds with the Borjas model and left both researchers and policy-makers wondering about the role of economic motives for migration.

One potential explanation for the apparent conflict between migration theory and empirical results is that individuals are not maximizing their income when deciding whether or not to migrate. However, this conclusion is only valid under the assumption that educational attainment provides a suitable depiction of the skills individuals consider when they decide about migration. In other words, the assumption implies that income maximization is equal to the maximization of labor-market returns to educational attainment. Our research strongly implies that this assumption does not hold. In fact, the common approach in prior migration literature of treating education as synonymous with skills may lead to an incomplete and potentially misleading picture of international migration.

Our research is the first to assess the role of occupational skills, that is, human capital acquired through performing job tasks, in the migration decision. We primarily distinguish between cognitive skills—for example, problem-solving, proactivity, and creativity—and manual skills—for example, physical strength and using machinery and tools. Occupational skills reflect the knowledge and capabilities relevant to the labor market more directly than educational attainment, which is typically fixed after labor-market entry and is therefore uninformative regarding skill developments during the career.

To investigate the importance of occupational skills for migration decisions, we use the case of migration from Mexico to the United States. Mexican migrants constitute by far the largest foreign-born population in the United States; almost one-third of all foreigners are Mexican-born immigrants. Mexico is also the first major emigration country that provides detailed information about the job task requirements of its workforce through a representative worker survey, which we use to construct the occupational skills measures.

Comparing the occupational skills of migrants and non-migrants, Mexican migrants to the United States are positively selected on manual skills, that is, migrants have higher manual skills than non-migrants, and are negatively selected on cognitive skills, that is, migrants have lower cognitive skills than non-migrants. In accordance with the Borjas model, this selection pattern can be explained by cross-country differences in returns to occupational skills, since returns to Mexicans’ manual skills are higher in the US than in Mexico, while returns to Mexicans’ cognitive skills are lower in the US than in Mexico. These results suggest that if policy-makers want to attract foreign workers with certain skills, they should focus on setting the labor-market returns to these skills appropriately.

The observed selection pattern has remained stable since the 1950s and has thus been largely unaffected by several substantial changes in US migration policy and visa regimes. Importantly, we also observe the same selection pattern within each education category, and also when accounting for persistent differences between geographical regions, industries, and broader occupational groups. This means that our results do not merely reflect that Mexicans are more likely to migrate if they are low educated or if they work in certain regions (e.g., those close to the US border), industries (e.g., manual-intensive industries), or occupations (e.g., agriculture).

One explanation for the focus on education as a proxy for migrant skills in previous literature is data availability, as measures of educational attainment are readily observed in international (e.g., census) data. However, our results strongly suggest that focusing on education alone is not sufficient to capture migrant skills. Since internationally comparable data on occupational skills are still scarce, we emphasize the importance of collecting such data (e.g., through job task surveys or direct assessments) in a wide range of emigration countries to improve the measurement of migrant skills. We believe that this would provide an important building block toward better understanding migration behavior.

Alexander Patt is a postdoctoral fellow at the Institute for Employment Research (IAB), Nuremberg. His research is focused on the role of cognitive and problem-solving skills in shaping individual and regional outcomes.

Jens Ruhose is assistant professor (tenure-track) of economics at Kiel University and a research affiliate at IZA and CESifo. His main research interests are migration, labor, and education economics. In recent years, he has made various contributions studying the selection of migrants.

Simon Wiederhold is professor of economics at the KU Eichstätt-Ingolstadt, co-director of the research institute BESH, research professor at the ifo Institute, and research affiliate at CESifo and ROA. In his research, he deals with the formation of skills and the effects of skills on economic and social outcomes.

Miguel Flores is professor of economics at the Department of Economics and affiliated professor at the School of Government and Public Transformation at Tecnológico de Monterrey. His areas of interest include regional economics, migration, spatial econometrics, and applied demography.