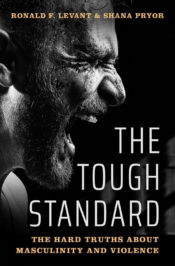 The Tough Standard: The Hard Truths About Masculinity and Violence

For decades there have been murders of unarmed black people by the police, which in recent years has been exposed and protested by the #BlackLivesMatter movement. This summer, unprecedented numbers of protesters have voiced their outrage in response to the murders of George Floyd and Breonna Taylor, the very recent and utterly senseless shooting of Jacob Black, and countless other acts of violence. Many mayors have announced plans for reform. The protests have rightly focused on the roles of race and racism in police brutality, but more attention needs to be given to the role of gender, particularly as municipalities seek to repair the police force to avoid this unnecessary use of force and violence.

But even more importantly, the culture of police departments tends to be macho and hyper-masculine—a culture which glorifies violence. This has always been the case but it has intensified as police departments across the county have moved from the community policing approach to militarization, aided by federal grants.

While among the general public masculinity is seen as synonymous with being male, psychologists view it differently—as a set of social norms, in this case norms for how boys and men should think, act, and feel. Masculinity is problematic in that that most boys are made to feel that they must conform to gender norms—that is, act in ways consistent with their gender. Masculinity is presented as obligatory for most boys, and most boys feel they have no other choice but to conform to masculine norms. This is not true for girls, who are given much more flexibility and latitude when it comes to their performance of gender than are boys. Furthermore, one of the principal functions of masculinity is to establish several hierarchies: of men over women, of white men over men of color, and of straight cisgender men over gay, bisexual, and transgender men.

To move away from the macho and hyper-masculine culture, police forces must diversify—not only in race but in gender—their ranks and leadership. The presence of many more women, openly LGBTQ people, and non-white officers on the police force, and deploying training designed to heighten awareness of masculinity and its relationship to violence, will be crucial in this regard.

Although most boys are expected to conform to masculinity norms, most adult men come to accept who they are, even if they do not meet the masculinity ideals. Masculinity is, after all, a tough standard. That is, they come to terms with the messages from their childhoods and recognize that their unique personalities do not fit or need to fit the ideal in all ways, perhaps saying to themselves “I am not the most masculine guy in the world but that’s OK.” A smaller group feels deeply ashamed of themselves for violating the masculine norms. Experimental research using the “precarious manhood” paradigm has shown that such men, when their masculinity is threatened, tend to respond with aggression.

The research that has been conducted over the past 40+ years shows that one or another scale that measures masculinity is correlated with one or another harmful outcome, many related to violence. Since most adult men do not conform to masculine norms, what accounts for these harmful outcomes? One source is the group of men who respond to threats to their masculinity aggressively. In addition, masculinity’s destructive outcomes also arise from those men who “check all the boxes,” and conform to masculine norms to the greatest extent. These are the men whom we might label as hyper-masculine. Both groups of men tend to populate police departments as currently constituted. Their influence must be diluted by diversifying police forces.

Featured image by Free-Photos from Pixabay

Ronald F. Levant, EdD, ABPP is Professor Emeritus of Psychology at The University of Akron.

Shana Pryor, MA, is a doctoral student of Counseling Psychology at The University of Akron. They are the authors of The Tough Standard: The Hard Truths About Masculinity and Violence.

Moving beyond toxic masculinity: a Q&A with Ronald Levant