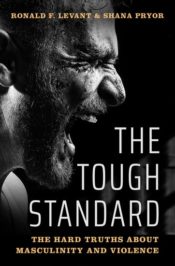 The Tough Standard: The Hard Truth About Masculinity and Violence

In 2018, the American Psychological Association released its first ever Guidelines for Psychological Practice with Boys and Men. At the time of the release, these guidelines were met with criticism by some who viewed them as pathologizing masculinity, but since the guidelines were released the discussion of “toxic masculinity” has spread to all areas of our society and culture. Ronald F. Levant has served as president of American Psychological Association as well as president of the association’s Society for the Psychological Study of Men and Masculinities. Levant has been a leader in the research on the psychology of men. We spoke with him about how traditional masculinity ideology is conceptualized by psychologists, how it plays out in our society, and why it’s important from a psychological standpoint to move beyond the concept of toxic masculinity.

Sarah Butcher: You observe that the feminist movement opened up more options for girls and women to express their identity but that there was no corresponding movement for men. Why do you think that is?

Ronald Levant: In the 1960’s amid the civil rights and LGBTQ movements, women decided once again (think of the suffrage movement) to address their oppression.  The result is what is called second wave feminism. Over the 70s to the 90s many men felt defensive in the face of women’s newfound assertiveness, resulting in what was then called a masculinity crisis (think Bridges over Madison County). This led to several different types of movements. One that gained prominence was the mythopoetic movement (remember Robert Bly and Iron John?), which did help some men become more comfortable with their emotions but was also was suffused with misogyny. Others like the Promise Keepers and the Men’s Rights Organization were even more blatantly misogynistic. What we advocate is a movement that is inspired by the ideals of gender equality, one that would help men ditch the burdens of dominance, and teach men that they can be men without the trappings of masculinity.

SB: You coined the term Traditional Masculinity Ideology—how do you define it, and how do you see it playing out in the lives of men?

RL: The most current definition is the holistic set of beliefs about how boys and men should, and should not, think, feel and behave. As far as current research is concerned, we’re typically looking at seven sets of prescriptive and proscriptive norms–avoidance of femininity; negativity toward sexual minorities; self-reliance through mechanical skills, toughness, dominance, importance of sex, and restrictive emotionality.

SB: Do you see any biological component to masculinity, or is it entirely socially constructed?

RL: There may be a biological basis to masculinity, but I am not aware of any solid support for this proposition. More importantly, we are psychologists not biologists, and we study masculinity as a social and psychological phenomenon.

SB: In recent decades, men have begun shouldering more of the burden of domestic labor and childrearing (although far from an equal share). Why does that pose a challenge to traditional masculinity ideology?

RL: Good questions. It poses a challenge to traditional masculinity ideology because it violates the avoid all things feminine norm, because childcare (and nurturance in general) is considered feminine.

SB: Research has shown that men have a harder time expressing (and even naming) their emotions. Why is that and what are the consequences for themselves and others?

RL: Decades ago, I noticed this in my work in the Boston University Fatherhood Project, and curiosity drove me to study the emotion socialization research literature in developmental psychology. Boys start out life more emotionally expressive than girls as neonates and retain this advantage over the first year of life, but from ages two to six—due to the childhood socialization of emotions, in which boys are made to feel ashamed of themselves for expressing vulnerable and caring emotions—many lose this expressive ability. This study formed the base for my normative male alexithymia hypothesis. “Alexithymia” means no words for emotions. My hypothesis is that socialization guided by traditional masculinity ideology, and in particular the norm of restrictive emotionality, produces a mild form of alexithymia in men, who cannot give a good account of their inner lives. This has enormous implications for relationships, stress management, and mental health. I later developed a treatment for such men called Alexithymia Reduction Treatment.

SB: As you argue, most violence is committed by men, yet most men aren’t violent. What is it that leads a minority of men to engage in violent behavior, and what role does traditional masculinity ideology play?

RL: This is a good question. The short answer is that we don’t know why some men are violent and others are not. Various theories have been proposed, with social-situational factors having more weight than personality factors. What we do know is:

RL: Based on the avoid femininity norm, boys prefer playing with other boys rather than girls, and thus rarely get to know girls as persons. In puberty boys become very interested in girls, but as sex objects. Objectifying women is at the very foundation of sexual violence.

SB: You also examine different versions of masculinity ideology such as African American masculinity and Latinx masculinity. How can the theory of intersectionality help us understand these different masculinities?

RL: The theory of intersectionality says that our overall identity and sense of self is a composite of a number of specific identities that may relate to our race/ethnicity, gender identity, sexual orientation, age cohort, etc. So, for example, African American men have to fulfil the requirements of the male role (e.g., providing for one’s family) impeded by racism, which has reduced educational and employment opportunities for black men.

SB: What is the role of traditional masculinity in mental and physical health?

RL: Traditional masculinity ideology emphasizes toughness, self-reliance and never revealing vulnerability. In the areas of physical and mental health this translates into taking health risks, not seeking professional help when needed, and relying on alcohol for stress reduction.

SB: Based on your clinical experience, what are some of the most effective techniques for men who want to escape the prison of traditional masculinity ideology?

RL: The most effective techniques I have found is helping men who are unable to verbalize their emotions to learn how to do that, to open up their hearts to their families. This often involves first dealing with their fears that this will somehow emasculate them, strip them of their ‘man card,’ and along the way dealing with their sense of shame resulting from violating the male code.

SB: What role do fathers play in the propagation of traditional masculinity ideology, and what are some tips for fathers wishing to model a more gender-neutral approach?

RL: The “essential father hypothesis” posits that the father’s essential role is to model masculinity and heterosexuality for his sons. Although this idea has been largely discredited in academia it is still very prominent among the public. A better alternative is the involved father role, in which dads share parenting duties equally with their female partners.

Ronald F. Levant, EdD, ABPP is Professor Emeritus of Psychology at The University of Akron; Past President of the American Psychological Association (APA) and APA Division 51; and two-term Editor of APA Division 51's quarterly journal, Psychology of Men & Masculinities. He is widely considered one of the key people responsible for creating the new field of the psychology of men and masculinities. He is the coauthor of The Tough Standard: The Hard Truths About Masculinity and Violence published by Oxford University Press.

The role of masculinity in reforming police departments

Why depth interviewing is essential to understanding individuals and institutions