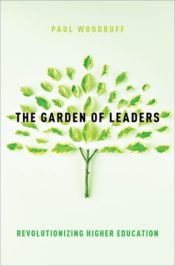 The Garden of Leaders

In their brand-new democracy, the people of ancient Athens knew there was one form of government they never wanted to suffer through again: tyranny. But they loved to see plays depicting tyrants on stage. These rulers typically do not listen to advice or expert opinion. But authority figures who don’t listen don’t learn; they make terrible mistakes and drag others down with them. One reason they don’t listen is that they think they know everything better than anyone else. That’s hubris, overweening pride—a trait no leader should exhibit. Another reason they don’t listen is that they hear advice from subordinates as a challenge to their authority. They are afraid of being overthrown, and so they construe unwelcome news as part of a conspiracy to destroy them. These tyrant traits are a kind of cognitive disability.

This is as true today as it was 2500 years ago. When I ask my students—who range from 18-year-olds to middle aged mid-career executives—to write about bad times they have had with authority figures, at least two-thirds of them write about people who would not listen. They might write about a boss or a coach or a band director or even a parent, but the pain is the same: If these people would only listen to us, we might improve the product, or start winning games, or whatever. But they don’t listen, so we quit, or tune out, or go into passive resistance. And they make terrible mistakes, of which the most painful is punishing people unjustly.

Ancient Greek plays illustrate these themes brilliantly. Originally the word tyrannos simply meant “ruler,” but by the time Sophocles was writing it referred to the kind of one-man rule Athens had known before its turn to democracy—two generations of a dynasty that did not feel bound to observe the law. These rulers had begun as populists, but their rule ended after a scandal involving sexual abuse—the younger of two tyrant brothers tried to use his power to force a boy to have sex with him. The boy and his lover assassinated the tyrant and were themselves killed. The older tyrant brother lived on and ruled a few more years but was put down with help from Sparta.

One of the most striking theater cases is that of Oedipus, who is depicted as having tyrant qualities in Sophocles’ play, Oedipus Tyrannus. There we see that Oedipus has done well by the city of Thebes; he is proud of his intelligence, and he loves to tell people what a genius he is. Now the city faces a new crisis—a plague. In those days, people believed that plagues were the result of violations of religious rules. In this case, an oracle has told them the cause is the presence of a killer in their land. The oracle says that the plague will continue until this killer is discovered and exiled. Oedipus guarantees that he will find the truth, end the plague, and save the city. He is hampered in his quest, however, by his tyrant qualities. If he were a better listener, he would learn quickly that he has been the problem all along, but instead he responds to what he is told with murderous rage, and so he draws out the investigation to great length (about a thousand lines of text). That is what makes this a great play. No other version of the story made Oedipus a tyrant or drew out the inquiry to such an extent, drawing out the pleasure its audience takes in knowing something the lead character does not.

At the end of his life, about thirty years after writing this play, Sophocles wrote a second play about Oedipus. In this one, Oedipus is saved and comforted by a leader who does know how to listen—Theseus. Oedipus is a refugee on the outskirts of Athens, at Colonus. He is blind and crippled, old, haggard, and no doubt filthy from years of homelessness. He is suspected of carrying a curse with him. When a crowd of citizens is about to turn violent and drive Oedipus away, Theseus arrives and listens to his story. Theseus shows compassion for the old wanderer and teaches the crowd to welcome him. In return, Theseus receives a blessing for the whole city. The playwright, now in his eighties, has closed the circle of his work with a depiction of a genuine leader—one who listens, acts with compassion, and brings benefits to all.

This is what we should want at all levels as we decide who should lead us in the future. Can we identify people who can listen and learn, who do not always think they know best? Can we find people who will cast aside suspicions of conspiracy and act without fear for themselves, but for the benefit of all? I hope so.

Photo by Levi Clancy on Unsplash.

Paul Woodruff teaches philosophy and classics at the University of Texas at Austin. He is author of The Garden of Leaders, The Ajax Dilemma and Reverence, as well as editor of The Oedipus Plays of Sophocles: Philosophical Perspectives, all published by Oxford University Press.