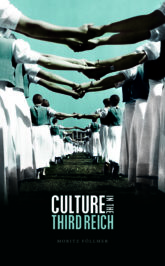 Culture in the Third Reich

In November 1942, Anne Frank drafted a fictional advertising brochure for the rear part of the building in central Amsterdam that sheltered her and other Jews. Turning Nazi oppression on its head, she ruled that “all civilized languages” were permitted, “therefore no German.” Still, she was prepared to qualify the ban on the language of her native country, stating that “no German books may be read, with the exception of scientific and classical works.” The teenage girl did not object when her father gently imposed the plays of Goethe and Schiller on her. Not only that, she pinned a magazine picture of Heinz Rühmann, a popular actor who continued to work successfully all through the Third Reich, on a wall–long faded but perfectly discernible for visitors of the house that is named after her.

Even Anne Frank, who professed her love for the Netherlands as she was hiding from her erstwhile compatriots, remained somewhat equivocal about whether to abandon German culture altogether. Such ambiguity was all the more characteristic of older European Jews. Many struggled to believe that a nation known for its love of the arts and humanities could have committed itself to unprecedented brutality. In the Warsaw ghetto, some musicians played Beethoven in courtyards or, circumventing a ban on Jews playing German music, concert halls. Others packed their instruments before deportation in the hope that their tormentors would let them perform rather than send them to the gas chambers.

Appreciation of German culture belonged to a prewar world to which many Jews continued to hold on, in contrast to those who shifted their interests elsewhere or had already done so before 1939. There was a generational dimension to this divide. Anne Frank was less attached to German language and literature than her father. Another teenage diarist, Ana Novac, found the complaints of a Hungarian woman about the appalling conditions in Auschwitz rather quaint: “German culture! What a disappointment for someone who spent her holidays in Baden-Baden and read Faust!”

The issue of whether or not to distinguish German culture from its Nazi rendition also engaged non-Jewish Europeans and Americans as they were defining their stance in the course of the Second World War. Many artists and intellectuals in countries occupied by, or allied to, the Third Reich preferred romantic German culture to rationalistic French culture. For that reason, and because they hoped for a renewal of their own national cultures, they initially accepted Hitler’s new order. There were also less highbrow motivations for accommodation. Cinemagoers saw German comedies and costume dramas for their entertainment value at a time when domestic film production was curtailed and Hollywood imports were banned.

Resistance movements targeted such accommodation, and with it the entire distinction between German culture and Nazi culture. Consequently, they daubed posters advertising the fantasy film Münchhausen on the streets of Paris and Amsterdam with swastikas. Not unlike Anne Frank, one Dutch resistance paper granted that Germany had produced some cultural figures of European standing but insisted that the country had never lost its “barbaric characteristics.” Once the exploitative character of Nazi occupation became painfully evident and the military situation began to shift, such arguments gained in persuasiveness.

In countries that were fighting Hitler, propagandistic mobilization stood in tension with respect for German music or thinking. In Britain, émigré scholars exerting significant influence on their disciplines coexisted with radio features including machine-gun fire accompanied by Richard Wagner’s melodies. In the United States, posters and animated films liberally drew on ethnic stereotypes. As one programme-maker put it, his job was to fire up hatred and hence convey without nuance that “a German is a Nazi.” By contrast, the Office of War Propaganda, targeting both domestic and enemy populations, maintained that “Nazi ideology” contradicted “the decisive tendencies and achievements of German culture.”

This uncertainty, while reflecting widespread ambiguity towards Germany, was chiefly caused by the Third Reich itself. Its occupation regime rapidly shifted from promoting German culture in conjunction with respect for–some–other national cultures to unabashed domination by controlling film markets and looting museums. Already before 1939, the Third Reich had presented a somewhat blurry picture, blending extreme-right influences with nineteenth-century traditions and twentieth-century innovations. Because it often remained unclear what, exactly, was “Nazi” about this culture, conservative theatre directors and apolitical film comedians, provided they were not Jewish, could advance their careers or at least carve out a space for themselves.

Legitimate culture in the Third Reich was a broad church, which made it both incoherent and powerful. As a result, Germans could quite easily distance themselves from a caricatured image of Nazism after 1945, enjoying symphonic productions by much the same conductors or films with long-popular actors. But this is precisely why a full understanding of culture in the Third Reich should include the perspectives of the populations that this regime persecuted, occupied, or fought. For all her own ambiguity, Anne Frank was astutely aware that German cultural domination hinged on violence.

Moritz Föllmer is an associate professor of modern history at the University of Amsterdam, and the author of a number of books and articles on identity and culture in twentieth century Germany.

The German Revolution of 1918-19: democratic ancestry or subjective liberation?