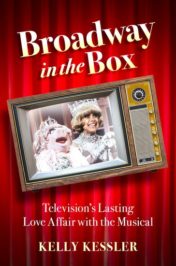 Broadway in the Box: Television's Lasting Love Affair with the Musical

On 3 July 2020, Lin-Manuel Miranda’s Hamilton—perhaps somewhat inadvertently—took its place alongside decades of Broadway shows and stars which had helped foster an awareness of American race relations via the small screen. When Disney won the $75 million bidding war for the global theatrical distribution rights of Hamilton, the filmed recording of the show’s original cast performing on the stage of the Richard Rodgers Theatre was just another feather in the media monolith’s cap. Disney soon announced a planned October 2021 theatrical release, to be followed by a Disney+ streaming run the next year.

But then COVID-19 shuttered theatres and shelved Summer blockbusters. Suddenly, Disney was throwing Hamilton straight to its hot streaming service for Independence Day weekend. America’s birthday was coming with a hip-hop beat, wrapped in Mickey Mouse paper, and to be enjoyed from the safety of folks’ own digital devices. Then less than two weeks later, George Floyd was killed by a policeman’s knee to his neck. Amid nationwide floods of anti-racist and police reform protests, Disney’s decision to premiere Hamilton on 3 July suddenly took on a whole new, politicized meaning.

Miranda’s story of immigrants, rebellion, and America’s Founding Fathers, as told through Black and brown bodies, came to an American audience still quasi-shuttered by a pandemic and experiencing perhaps the most significant anti-racist uprising in half a century. Hamilton was not just another big budget Disney deal, but a conveniently placed reckoning with the nation’s racist past and present. The Tony-winner became part of a storied history of musicals helping to frame racial discourse from the comfort of America’s living rooms.

When only 9% of US households even had TVs, chart-topping singer and acclaimed actress Ethel Waters dropped truth bombs on Perry Como’s Kraft Music Hall, performing Moss Hart and Irving Berlin’s “Supper Time.” From the 1933 Broadway revue As Thousands Cheer, the gut-wrenching number follows a woman futilely preparing for dinner after receiving news of her husband’s lynching. Six years later producers blocked Twilight Zone legend Rod Serling’s self-penned Emmett Till-inspired television drama from airing on the United States Steel Hour, even though he had switched the victim from a young African American in the South to a Jew in New England. Advertisers still found it too uncomfortably close to the controversial case. But Waters’ painful musical reflection on America’s grotesque history of lynching made it on the air under the cover of legit Broadway fare.

In the late 60s, Black and white musical stars alike used the medium to position themselves within American racial politics. Two days prior to MLK Jr.’s assassination, pop singer and co-star of Francis Ford Coppola’s Finian’s Rainbow (1968), Petula Clark, found herself in hot water after gently grasping the elbow of her African American guest star, celebrated singer, actor, and outspoken Civil Rights activist Harry Belafonte during a taping of her special, Petula. After the taboo-touch during “On the Path to Glory,” Chrysler’s advertising manager demanded (and failed to gain) a reshoot. The ad man later claimed he had just been really tired, not racist.

One year later, Pearl Bailey and Carol Channing: On Broadway and An Evening with Julie Andrews and Harry Belafonte featured high-profile interracial double-bills. The two divas concluded their Broadway tribute with the Civil Rights anthem “I Wish I Knew How It Would Feel to Be Free,” punctuated by the camera heavy-handedly zooming in on their contrasting hands clasped together in unity. Later that year Tony-winning director/choreographer Gower Champion overtly marketed the Andrews/Belafonte special on their romantic chemistry. No elbow grazing here; the two danced, touched, and embraced on-screen and in promotional materials. Although ABC received 75 at-times racial-slur-laced letters of disapproval in response, Marva Spellman of the State University of NY Urban Center claimed in the New York Times that “the program was memorable because it showed in this riot torn assassination prone, seething society of racism and revolution two beautiful people, two lovely human beings, one white and one Black, delighting in beautiful music and in each other’s beauty and talent.” She went on to say the show “probably did more for race relations in our beleaguered United States than many, many hours of intellectual befuddlement from professors with PhDs”.

Of course, not all performances aged well. The 1970s brought some truly weird moments of racialized musical television, like Jack Lemmon’s 1972 cringeworthily, exaggerated “Blackvoice” rendition of “It Ain’t Necessarily So” from Porgy and Bess on Martin Charnin’s ‘S Wonderful, ‘S Marvelous, ‘S Gershwin. Six years later, Sammy Davis Jr. appeared in Steve and Eydie Celebrate Irving Berlin, alternating between an exaggerated Blackface/Blackvoice character, a dapper businessman, and a dude in a Travolta-esque disco suit in a bit celebrating “Alexander’s Ragtime Band.” Although not alone in their uncomfortable racializations of Broadway, these two moments stand out as uniquely strange.

With new distribution systems came new productions foregrounding stories of racial struggle and African American genius: shows like Sophisticated Ladies (1981) live from Broadway on pay-per-view and productions of Eubie! (1981) and Purlie (1981) on the premium Showtime channel’s Broadway on Showtime. As Disney+ snagged Hamilton during this modern moment of racial unrest, it became part of this story. To quote Miranda himself, “who lives, who dies, who tells your story?” As it turns out, the story has historically been set to a toe-tapping tune and courtesy of this week’s sponsor.

Kelly Kessler a public voices fellow with The OpEd Project, teaches television and film studies at DePaul University and is the author of the new book Broadway in the Box: Television’s Lasting Love Affair with the Musical.