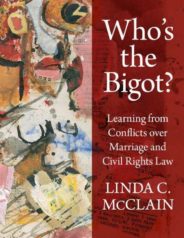 Who's the Bigot? Learning from Conflicts over Marriage and Civil Rights Law

In an eerie echo of the 2016 presidential campaign, President Trump has denied that the brutal murder of George Floyd by police officer Derek Chauvin reveals systemic racism and implicit bias in the U.S., instead describing it as a horrible act by a “bad apple.” Tweeting about law and order and vowing that the police will not be defunded, President Trump asserted that 99% of the police are “great, great people.” In 2016, while on the campaign trail, vice presidential candidate Mike Pence remarked, after a fatal shooting by police of Keith Lamont Scott, a 43-year old African American man: “Donald Trump and I know and believe that the men and women of law enforcement…they’re the best of us and we ought to set aside this talk…about institutional racism and institutional bias.”

In the first presidential debate between Democratic nominee Hillary Rodham Clinton and Republican nominee Trump, moderator Lester Holt asked Clinton, “Do you believe that police are implicitly biased against black people?” She answered: “Lester, I think implicit bias is a problem for everyone, not just police. I think, unfortunately, too many of us in our great country jump to conclusions about each other… I think we need all of us to be asking hard questions about, you know, ‘Why am I feeling this way?'” Clinton suggested de-biasing tasks that police departments could undertake. In the vice presidential debate, Pence charged Clinton with using “a broad brush to accuse law enforcement of implicit bias or institutional racism” and stated:  “Enough of this seeking every opportunity to demean law enforcement broadly by making the accusation of implicit bias every time tragedy occurs.” Conservative critics charged that Clinton had suggested “everyone is bigoted” and called “the entire nation racist.”

Across the United States, record numbers of people have been protesting to express outrage over the murder of George Floyd, express solidarity with Black Lives Matter, and demand systemic change, including the end of police violence against black and brown people. Numerous statements by public figures, educational and religious institutions, and corporations express similar sentiments, urging that a tribute to Floyd should be addressing systemic racism. The Trump administration and some prominent political allies, however, resist diagnoses of institutional racism and calls for fundamental reform. Showing a shocking lack of empathy and a hollow understanding of civil rights, President Trump – when citing the latest employment numbers as evidence of economic recovery – suggested that Floyd was “hopefully looking down right now [from heaven] and saying that this is a great thing that is happening for our country” (the numbers actually showed a continuing gap between white and black unemployment rates). This jarring remark ignores the racial injustice triggering the protests. Indeed, Trump’s remark proposes that positive economic indicators should comfort a deceased person whose last words were “I can’t breathe” because of a police officer’s knee on his neck.

At a recent roundtable in Dallas on race and policing, Trump again resisted any diagnosis of systemic racism in the United States, attributing police brutality to “bad apples” and predicting that addressing racism “will go quickly and…go very easily.” He acknowledged the need to “confront bigotry and prejudice wherever they appear,” but stated: “we’ll make no progress and heal no wounds by falsely labelling tens of millions of decent Americans as racists or bigots.”

Why do calls to address systemic racism get reduced so readily to charges of blaming “good” or “decent” people” for the conduct of a few bad ones? One reason is the premise that racism includes only overt bigotry. If people associate racial discrimination only with the brazen racial bigotry of historical figures like Sheriff Bull Connor and other white segregationists, they may assume that because that era of overt public racism is over, racism itself is a thing of the past. These “racial ghosts” (as anthropologist John Jackson Jr calls them) may give a false sense of progress and distract from present-day problems like institutional racism and implicit bias.

In her book, White Fragility, anti-racist educator Robin Diangelo explains that white people have difficulty perceiving the forms that present-day racism takes because they believe that the racist acts intentionally and is “ignorant, bigoted, prejudiced, mean-spirited, old, and Southern.” To be a racist, is to fall on the “bad” side of the good/bad binary. As Pence’s response to candidate Clinton’s remarks suggest, people bristle at any charge of bias, whether explicit or implicit, because it seems to suggest that they are bad people.

Undeniably, the persistence of overt racism and extremist hate that spills over into lethal violence should not be denied. It is impossible to watch the video of Chauvin’s murderous cruelty toward Floyd – even as medical personnel and bystanders pled for Floyd’s life – without believing he is a very bad person. But the facts that he remained on the Minneapolis police force despite seventeen prior complaints of police misconduct and that the Minneapolis police union criticized the firing of Chauvin and his fellow officers suggest broader structural problems about race and policing at the heart of current protests. Moreover, some commentators argue that contributing to these problems are Trump’s “constant bigotry, his dismantling of police reforms, his encouragement of police aggression and his violent speech.”

A focus on a few people with bad motives, evocative of famous bigots of the past, distracts from attention to the meaning and effect of present-day social practices that embody institutional racism and implicit bias. Protestors, civil society groups, and politicians seek to avoid that distraction and to focus on such social practices. Of course, Chauvin and his fellow officers should be prosecuted to the full extent of the law for their crimes, but addressing too-long ignored problems of systemic racism is also imperative. In 2016, when Pence urged that talk about institutional racism and bias be set aside, he suggested that “the faith community…has before and can again play an enormously important role in healing the divide in our country.” In 2020, even as the Trump administration deflects calls for structural transformation with narratives of bad apples versus good people, many religious leaders call for such transformation and argue that national healing must begin by reckoning with institutional racism. Such calls tap into a deep strand in American history: racial injustice represents a failure to live up to democratic and constitutional ideals and we should work to realize those ideals. And, as the multi-generational and multi-racial protests continue, some political and civic leaders are heeding that call with the important step of legislative reform of policing.

Featured image credit: apple-rotten-frozen-shrunk-haegen by ManfredRichter. Free to use via Pixabay.

Linda C. McClain is the Robert Kent Professor at Boston University School of Law. She also teaches in BU's Kilachand Honors College. An internationally known scholar, she has written about marriage, family law, civil rights law, gender equality and law, feminist legal theory, and law and religion. She has held fellowships at the University Center for Human Values, Princeton University, and the Safra Center at Harvard University. Her books include The Place of Families: Fostering Capacity, Equality, and Responsibility, Ordered Liberty: Rights, Responsibilities, and Virtues (with James E. Fleming), Gender Equality: Dimensions of Women's Equal Citizenship (co-edited with Joanna Grossman and cited in the credits for On the Basis of Sex), and What Is Parenthood? Contemporary Debates About the Family.

How video may influence juror decision-making for police defendants