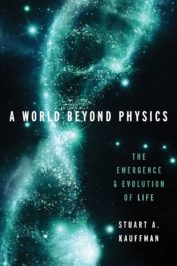 A World Beyond Physics: The Emergence and Evolution of Life

“Getting on the bus to Abilene,” as Harvey later called it, is taking a trip with fellow passengers who willingly get on a bus headed off to somewhere none of them want to go.

The paradox occurs when people in a group each agree on an issue or action they think the others want, when in fact none actually want it. You may have experienced this when a group of friends winds up at a restaurant or bar they think the others wanted to go to when, in fact, none did. The Abilene Paradox is different from what’s known as Groupthink; in Groupthink everyone gets talked or pressured into adopting a preference. In the Abilene Paradox the common view was never a preference at all…for anyone!

For the last few decades, too many Americans have climbed aboard one of two buses headed to Abilene: a red bus and a blue bus. And, unfortunately, both buses are taking this nation to a place few passengers want to travel yet cannot find it in themselves to avoid. The coronavirus pandemic and the renewed crisis over police brutality are raising the speed limit.

Most Americans agree on most of the basic tenets of what it is to be American and disagree with the extreme views of political party bases. Liberals, or those on the blue bus, typically don’t want unrestricted abortion, full gun control, or high taxes. Conservatives, the red bus passengers, typically don’t want to endanger moms over problematic pregnancies or full, open carry of every type of weapon, or no taxes whatsoever.

However, their common middle-of-the-road preferences have been silenced as Americans have allowed themselves to board one of two buses to Abilene. The Democratic and Republican parties are composed of diverse constituencies. However, the passengers on the red bus are inclined to stereotype the blue bus as their most feared liberal boogeyman (tax-and-spend, socialists, anti-family, elitists).

Alternatively, those on the blue bus might look out their windows and see only hard-right fundamentalists, greedy capitalists, gun-toting Second Amendment advocates, or chauvinists of many stripes.

Lifting the veil of mistaken stereotyping, might it be that most of the people on those two buses agree on what matters most to their respective parties and even with those on either bus?

Progressives don’t all think we need to wear masks everywhere or deprive ourselves of making a living, and they do not all see law enforcement as an enemy. Conservatives don’t all think we need to throw all caution to the wind and go back to the good-old days of pre-COVID-19 or return to the days of Jim Crow. We suspect all Americans would agree that livelihoods must be protected, that preventing the spread of a deadly virus is a good thing, that the vast majority of law enforcement officers perform an exemplary job under difficult circumstances, and that too many African Americans are dying at the hands of authorities. Americans want a government that will find creative solutions to our problems.

Harvey noted that the road to Abilene is fueled by dark fantasies, fear, blame and recrimination. The metaphorical Abilene to which we refer is a country and government so polarized that the normal functions of government are gridlocked and where Americans who share so much mistakenly self-sort into factions that seem bent on destroying one another. And today it is a country where people are beating each other over wearing a cloth mask and some are burning their cities in rage. This is not the America our founders wanted.

The irony of the Abilene Paradox is that most Americans agree on most things, they are just too afraid or intimidated to admit it.

According to Harvey, the best way to get off the bus to Abilene is peaceful but effective confrontation in a group setting – someone needs to have the courage to say the emperor has no clothes before everyone can admit it. Most importantly, we need to talk openly about our agreements as Americans.

This takes leadership, someone with a voice and the fortitude to articulate the problem and embrace solutions that bring us together rather than continue to divide. This is a role for party leadership and the candidates in the upcoming presidential and congressional campaigns who can focus both on Americans’ shared concerns about the pandemic and peoples’ livelihoods. Otherwise, despite our political stripes, we are all on the same road to Abilene, and COVID-19 and racial politics put the pedal to the metal.

We simply need to relearn how to manage our agreements and get off the bus. We need to be the United States of America once again.

Stuart A. Kauffman is a MacArthur Fellow, fellow of the Royal Society of Canada, and an emeritus professor of biochemistry and biophysics at the University of Pennsylvania.

Carl W. Hunt is a retired US Army colonel and former consultant to the US Department of Defense and US Intelligence Community. He is a graduate of the National Defense University’s National War College.

Lawrence A. Kuznar is a professor of anthropology at Purdue University, Fort Wayne, Indiana, whose specialties include social conflict and national security.