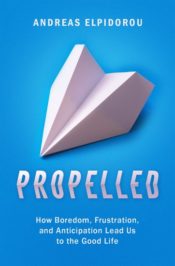 Propelled: How Boredom, Frustration, and Anticipation Lead Us to the Good Life

It was just the two of them: on a raft, lost, floating off the coast of Africa—the lone survivors of a shipwreck. Years before, struck with stupendous boredom, Hymie Basteshaw decided to become boredom’s master. He read what others wrote about boredom, studied its physiology, and discovered its secrets in the wavering folds of human cells. Mid-sea, he now shares with Augie March his first and “obvious” findings. Boredom is “the shriek of unused capacities, the doom of serving no great end or design, of contributing to no master force. The obedience that is not willingly given because nobody knows how to request it. The harmony that is not accomplished.” Basteshaw is but a minor character—a psycho-biologist, a carpenter, a genius, a “maniac”—in Saul Bellow’s long picaresque novel, The Adventures of Augie March. He offers not a minor or obvious feature of boredom, but a discerning appraisal of its intimate nature. Boredom, Basteshaw tells March, although not in these exact words, is hybrid, both personal and social.

Our current situation is one of crisis, of resources, values, and priorities. It’s also a crisis for the study of boredom. It’s a call to understand boredom both as a psychological and social phenomenon. If our aim is to capture what it means to experience boredom right now—the boredom of social distancing, quarantine, and the pandemic—we can’t rely exclusively on lessons that we’ve drawn from willing participants in on-line or in-person studies. Yes, we are bored with more or less the same things that previously bored us. But we are bored because of our newfound and newly imposed social condition. In social distancing, we find ourselves in an unusual position. Both restrained and acutely aware of the meaninglessness of our everyday actions we are under the threat of a new boredom—a boredom that looks and feels just like our ordinary boredom, but which has grown out of a much different and more fertile ground.

What is boredom most fundamentally? Boredom is an unpleasant state that signals to us the presence of an unsatisfactory situation and which, at the same time, contains a strong desire to do something else. During boredom, we feel both frustrated and listless. We’re disengaged from and dissatisfied with what we do. Our situation doesn’t hold our attention. It doesn’t interest us and doesn’t strike us as meaningful. In a state of boredom, we’re moved to think of alternative situations and goals, ones that are more interesting, engaging, and meaningful to us than our current ones. We itch to leave boredom behind and are propelled to try to do just that.

Boredom is a problem—a disruption of agency, a deficit of meaning, or a block in our ability to engage cognitively and satisfactorily with our situation at hand. And yet, it’s also a solution. Or better, it’s the promise of a solution. The unpleasantness of boredom, along with its effects on our psychological processes and behavior, offers us a possible way out. Boredom is that disagreeable reminder that we should be doing something other than what we are currently doing. It’s also a repellent force, a drive that could, under the right conditions, allow us to overcome our discontent.

What I have just described sounds a lot like a psychological state that exists in a social vacuum, but that isn’t so. Boredom can arise out of a perceived dissatisfaction with our situation, a mismatch between our wishes and reality, or even a lack of sufficient engagement with the task at hand. All of these prompts of boredom can be both personal and social. Any social condition that either begets or supports them would be one that promotes boredom.

We are currently experiencing a change in social order. Compared to our recent past, the present of the pandemic is one characterized by excessive order. Out of necessity, caution, concern, or fear, we are constrained. There’re real and tangible limits to our opportunities and obstacles to free action. And so, out of this new social order, boredom grows. “Boredom arises when we must not do what we want to do, or must do what we do not want to do,” psychoanalyst Otto Fenichel once observed. In Melancholy and Society, German sociologist Wolf Lepenies warned us of how socially frustrated agency is a fertile ground for boredom. Experimental studies agree that conditions over which individuals have little control can give rise to boredom. And a recent study examining the attitudes of people living in quarantine in Italy appears to confirm it.

There’s another element of our social condition that contributes to the rise of boredom. Boredom is related not just to the perceived control or autonomy that we have over a situation but also to how meaningful our situation strikes us. Studies report that perceived meaninglessness is both a component of and a likely antecedent to boredom. While social distancing, we often feel that our actions and activities are lacking in meaning. Why? In the face of the pandemic, our everyday activities seem insignificant. For those of us who are not nurses, doctors, first respondents, essential workers, or actively involved in helping others or fighting the spread of the virus, our actions seem to have little effect on the situation.

When faced with the boredom of the pandemic it helps to bring to mind the function of boredom. It offers us a productive way to think about our boredom, for it underlines its existential import. We are fortunate not for this or that experience of boredom, but for the capacity to experience boredom. Boredom—in its non-chronic form—is a valuable tool and perhaps now, more than ever, a privilege. It’s both an affective reminder that we are stuck with ourselves and a call to become more than what we are right now.

But boredom can only do so much. Once it has made itself known to us, we are on our own. We have to decide how to act and what to do. We can turn to diversions or reflection, act rashly or prudently, give up or stand up, help others or look after ourselves. The possible outcomes of boredom are many and varied.New habits, opportunities, and careers often start with the thought “I am bored.” But so can unhealthy eating habits, binge drinking, drug use, or even destruction.

One hopes that in times like these boredom’s call can be put into productive and compassionate use. To borrow Voltaire’s words, one hopes that we can cultivate our garden: the ground out of which our personal and social existence can grow and flourish—not as an act of quietism but as a sign of resilience and as way to realize change.

It’s worth a try, even if it is done out of boredom.

Andreas Elpidorou is a writer and philosopher at the University of Louisville. He specializes in the philosophical study of the mind and has published extensively on the character of consciousness, cognition, and emotions. His new book Propelled: How Boredom, Frustration, and Anticipation Lead Us to the Good Life is published by Oxford University Press.