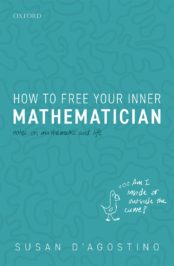 How to Free Your Inner Mathematician: Notes on Mathematics and Life

When Isaac Newton practiced social distancing during the Great Plague that hit London in 1665, he was not expected to transition from face-to-face work with scientist colleagues to a patchwork of conference calls and email. With no children underfoot who needed care at home, he concentrated on developing early calculus ideas. With no exposure to a 24-7 news cycle of the escalating crisis, he had the mental space to develop a theory of optics. He even found a quiet moment in which to note an apple falling from a tree, which helped him unlock a fundamental law of physics.

Your efforts to focus on work while social distancing to help flatten the curve of the COVID-19 pandemic may present more challenges. As you adjust, consider the following mathematical metaphors for thriving with your personal and professional goals.

Mathematicians like to say that you can’t comb a hairy ball. The expression is a reference to a curious statement called the Hairy Ball Theorem. To understand this theorem, imagine a ball with an abundance of porcupine quills emanating from it. Now imagine trying to comb the quills so that all lie flat against the ball’s surface.

You might make good progress combing at first. You might even begin to believe that it’s possible to comb the quills so that all lie flat against the ball. However, the Hairy Ball Theorem assures you that you will never succeed. That is, any attempt to comb the hairy ball of quills will always leave at least one quill sticking out.

Working to make progress on personal and professional goals in the midst of a pandemic is a lot like trying to comb a hairy ball. Perfection is an unachievable goal. Put forth your best effort and celebrate your progress.

Chaos theory asserts that a small change in an initial condition of an experiment or event may lead to a dramatic change in outcome. The idea is sometimes described as the Butterfly Effect, in which something as inconsequential as the flap of a butterfly’s wings in one part of the world may induce a sequence of events over time that causes a far-off tornado.

What does chaos have to do with this social distancing era? Your initial conditions at the start of the pandemic may have differed from that of a friend or colleague. Perhaps you were more or less farther along with your goals. Maybe you have different caretaking responsibilities for children or aging parents. Perhaps you have an underlying health condition that warrants extra attention. Resist comparing your path to others’ as the exercise is futile; A small difference in your starting place may imply a large difference in outcome.

Be okay with small steps, given the harmonic series

In good times, you may enjoy achieving 100% of what you aim to accomplish in a given day – a sentiment you might represent with an infinite sum of ones, where each “1” in the sum symbolizes the feeling of “achieving 100%” on a collection of sequential days moving forward:

This infinite sum approaches infinity, which might suggest that “the sky’s the limit” regarding your personal and professional goals.

However, in challenging times, some pursuits might leave you feeling like you’ve hit a ceiling. You might represent this scenario with an infinite sum in which each consecutive term gets noticeably smaller according to a pattern:

What does this sum equal? Note that you might rewrite each term in the sum as the areas of the increasingly smaller squares and rectangles in the following sketch:

So, this infinite sum must equal the area of the largest, outer rectangle whose length is two and width is one. Since the area of any rectangle is its length multiplied by its width, you obtain:

As this example illustrates, some infinite sums of increasingly smaller numbers are bounded. If the terms in this sum represented a fraction of what you accomplish in collection of consecutive days moving forward, you might be understandably discouraged.

However, when the challenges of social distancing leave you unable to achieve 100% of your daily goals, you might draw inspiration from a different infinite sum known as the harmonic series:

If pandemic-induced social distancing slows progress towards your goals, be okay with taking small steps. Like the harmonic series, the size of your steps does not limit you; the sky may still be the limit.

Mathematics is more than a tool for computation. The field offers an invitation for deep, delightful thinking, along with metaphors for fostering courage in challenging times.

Susan D'Agostino is the author of How to Free Your Inner Mathematician: Notes on Mathematics and Life (Oxford University Press, 2020). She is a mathematician and writer whose essays have been published in Quanta Magazine, Scientific American, Financial Times, Nature, Undark, Times Higher Education, Chronicle of Higher Education, Math Horizons, Mathematics Teacher, and others. She is a Council for the Advancement of Science Writing Taylor/Blakeslee Fellow at Johns Hopkins University.