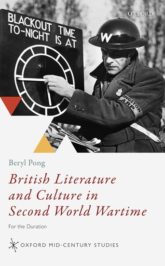 British Literature and Culture in Second World Wartime: For the Duration

COVID-19 refers not only to a virus, but to the temporality of crisis. We live “in times of COVID” or “corona time.” We yearn for the “Before Time” and prepare for the “After Time.” Where earlier assessments of pandemic time focused on rupture, we are now reckoning with an open-ended, uncertain future. This endeavour would benefit from expanding our horizon for temporal empathy—for understanding and foregrounding the plural nature of how pandemic time is experienced, depending on who one is and where one is situated.

A few months ago, mainstream temporal referents for the pandemic centred on the familiar temporality of wartime. From “frontline heroes” to the “coronavirus war economy,” from the Second World War to 9/11: governments described COVID-19 as a war to be won. Critics have since argued that wartime is an uneven comparison with our present—that it invites racism, enables state intervention into individual freedoms, and conceals deficiencies in the economic model upon which public health operates. However, war rhetoric offered the primary temporal model for narrativizing the uncertainties of the pandemic, particularly in the UK, in part because it ascribes agency and a sense of control. It suggests we “fight against” something unseen, and it promotes a sense of resolve, for example, by encouraging connections between “Stay at Home” discourse and the Blitz spirit.

Fundamentally, war rhetoric also helps us to manage our anxieties about the future. For temporal uncertainty is at the heart of how one experiences wartime—we assume wartime ends, but we don’t know when or how, so we live in a suspended present. This temporal anxiety can be termed “chronophobia”: a fear or dread of time, particularly that of the future.

In this sense, the years surrounding the Second World War might in fact be insightful for our present: not because we are at war, but because chronophobia was the temporal surround from the interwar through to the post-war period. There was a decades-long build-up to the Second World War, such that the feeling or expectation of wartime began far before 1939. Subsequently, the war’s atomic end was the beginning of a third, chilly conflict. So the mid-century present was a constant victim to a seemingly inevitable future of catastrophe.

Paul Saint-Amour calls the psychic impact of anticipatory anxiety from this period “pre-traumatic stress syndrome.” It turns out this is a diagnosis (or rather, prognosis) shared by an American physician, Alison Block, earlier this March:

…the health-care workers I know are suffering from a unique brand of psychological distress. I won’t call it anxiety, which the Diagnostic and Statistical Manual of Mental Disorders (DSM-5) describes as “excessive worry,” because there’s nothing excessive about it. I would describe what we’re suffering from as pre-traumatic stress disorder… Doctors and nurses see news from our colleagues in China, South Korea and Italy, letting us know in no uncertain terms what is coming. The result is that we are all feeling the psychological ramifications of the trauma. We just haven’t experienced the trauma yet.

Block points to feelings of belatedness or inevitability in pandemic time, but she also highlights the temporally syncopated nature of the crisis. Both aspects of pandemic time are represented by the data visualization of the curve. On one hand, the curve globally emplots the suspension we feel as we watch cases rise and peak; on the other hand, it maps together different pandemic trajectories from different temporal periods and geographical locations. These two temporal modes, belatedness and syncopation, inspired the various “missives” that were sent “across” corona time over the past few months. These include letters from one coronavirus-stricken country to another not yet far along their curve, and videos filmed to warn one’s past, pre-pandemic self of the crisis to come.

COVID-19 has now been with us long enough for us to see some countries passing their peaks and flattening their curves; other countries experiencing subsequent spikes in cases following from their peaks; and other countries still only just beginning their pandemic journey. To “battle” COVID-19, as Block says, we need to cultivate temporal empathy. We need to bear in mind that our present isn’t another’s present: that we aren’t all living within the same temporality or experience of pandemic time, even if we exist in an entwined global affect or collective sense of chronophobia. We occupy dissonant, even if interconnected, rhythms. Of course, this is still a reflection of pandemic time before it becomes what Reinhart Kosselleck calls a “future past” or “superseded former future.” Only time will tell.

Beryl Pong is a vice-chancellor's fellow in English at the University of Sheffield. Before that, she held research fellowships at Jesus College, University of Cambridge, and at the University of Toronto. Her research centres on the relationship between war, time, and the creative arts, and her essays have appeared in Modernism/modernity, Journal of Modern Literature, Literature & History, and elsewhere. She is the recipient of a British Academy Rising Star Engagement Award for the project, 'The Aesthetics of Drone Warfare'.  She is the author of British Literature and Culture in Second World Wartime.

How germs (or the fear of them) spawned Modernism

The story of COVID-19, by the numbers