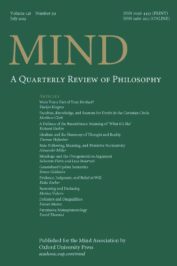 MIND has long been a leading journal in philosophy. For well over 100 years it has published the best new work in all areas of the subject. The journal continues its tradition of excellence today. The journal aims to take quality to be the sole criterion of publication, with no area of philosophy, no style of philosophy, and no school of philosophy excluded.

Pregnancy has variously been described as unique, confusing and full of ambivalence; as involving a doubling or splitting the person; and as challenging widely-held philosophical assumptions about firm distinctions between self and other or mind and body. But what, exactly, is pregnancy? What is this unique human – and mammalian – state? What is its nature?

I would not be the first to note this question that appears to have been under-researched in philosophy – and Western intellectual history as a whole. That may seem a surprising claim given the burgeoning philosophical literature about, and the widespread public discussion of, abortion. But discussions about abortion rarely focus on the nature of pregnancy. Abortion discussions tend to ask what a fetus is. Such discussions focus on whether a fetus has value, rights, or entitlements and whether another person can legitimately decide to cease providing it with the highly intimate and invasive, constant and irreplaceable life-support that is necessary for its existence.

Only in pregnancy – and in no other human circumstance – do we routinely find ourselves not only providing direct, constant and irreplaceable life-support to a developing human through direct use and wholesale involvement of our entire body; we also find that that human is developing in our most intimate insides. Or – to capture the perspective from the other inside – only in pregnancy does a developing human find itself not only wholly dependent and reliant on a single irreplaceable other human, but residing in its most intimate insides, directly hooked up to her physiology and partaking in her physical/hormonal state.

So how should we understand this unique – yet entirely common and mundane – human and mammalian state? What is the maternal-fetal relationship? There are many ways of approaching these questions, but at least one place to start is to ask about parts. Most things in our body, after all, are parts of our body. Not just our hearts and kidneys, but also our blood and, sex-cells, and the every-changing molecules of which are bodies are composed. Perhaps, even, body-parts that have been donated to us, such as donated blood or organs. The embryo/fetus, like other body-parts, resides in the innermost regions of the mammal. So, is it a part of that mammal, or, like the metaphorical bun in the oven, merely a temporarily resident non-part?

It is this question that I invite you to consider. Despite what appears to be a very widespread assumption to the contrary, I am inclined to argue that the fetus is indeed part of the maternal organism. First, it is immunologically tolerated by the pregnant organism. Second, it is directly and topologically connected to the rest of the maternal organism via umbilical cord and placenta, which is composed of fetal and maternal-origin cells, without a clear or defined boundary between the two. Third, the fetus is physiologically integrated  into the pregnant organism, and regulated as part of one metabolic system. Whilst none of these are perfect indicators of organismic parthood, they jointly pose a very strong case. Note that all of these change radically at birth: the baby is no longer topologically connected (and placenta and umbilical cord are discarded); the baby is now its own physiological, homeostatic and metabolic unit (although still heavily dependent on maternal care/provision and care); and it is no longer in direct contact with the maternal immune system.

At the same time I certainly don’t to find any good arguments in favour of the view that the fetus isn’t a part; the position tends to be assumed, but not argued for.

But I don’t mean that to be the end of the question. Rather I hope it is its very beginning. 2020 is rather late seriously to begin considering the nature of pregnancy – the process by which every human, and every mammal, comes into existence. Death, by contrast (which strikes me as far less complicated) has been a favourite philosophical topic for at least 2000 years.

It is surprising that convictions about the non-parthood of fetuses appear to be so deeply entrenched, in the absence of hardly any substantial argument and reflection on the question. My main hope is that this will change, and that my words will not be the final, but the rather the first, say in what I think should be a rich and careful collective effort in answer questions about the nature of pregnancy.

Elselijn Kingma is a Dutch philosopher and an associate professor in philosophy at the University of Southampton. Her article, "Were you part of your mother?" was included in the Best of Philosophy 2019 collection.