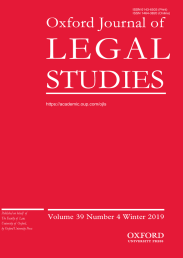 The Oxford Journal of Legal Studies is published on behalf of the Faculty of Law in the University of Oxford. It is designed to contribute to understanding in all matters relating to law. While the Journal has an emphasis on theoretical work and on broad issues arising from the relationship of law to other disciplines, no topic of legal interest and no approach to scholarship is excluded.

In today’s globalised economy, the free movement of goods, services and capital impels countries to compete for trade and foreign investment by lowering their labour standards. International trade is therefore widely perceived as instigating regulatory competition between countries, or a “race to the bottom”. The challenge that international trade poses for countries’ labour standards has been a central concern of the International Labour Organization (ILO) since its establishment. As recently as this year, in its Centenary Declaration for the Future of Work, the ILO reiterated the recognition that “in conditions of globalization, the failure of any country to adopt humane conditions of labour is more than ever an obstacle to progress in all other countries”.

In addition, transnational labour regulation can be viewed as challenging international trade. If we think that labour standards increase production costs, the imposition of more protective labour regulation on countries might be perceived as preventing them from fulfilling their trade potential, hampering the advantages expected from liberalised trade. Take for example the World Trade Organization’s Singapore Ministerial Declaration. While referring to a possible positive relationship between core labour standards and trade liberalization, the Declaration also rejects “the use of labour standards for protectionist purposes, and agree[s] that the comparative advantage of countries, particularly low-wage developing countries, must in no way be put into question”.

Are international trade and labour regulation really incompatible? Is it possible to reach a revised understanding of the ‘race to the bottom problem’?

A game theoretical analysis offers a useful conceptual framework to address these questions.

The concern of a race to the bottom under a globalised economy is a collective action problem. Game theory contributes in this respect as it shows that such regulatory competition is ‘destructive’ in a very specific sense. Game theoretical models predict that as all countries will adjust and lower their labour standards in response to meaningful threats of undercutting, no country will gain a substantial comparative advantage from doing so, not even those which are first to defect from these standards; the outcome is sub-optimal for all. That is, each state would be stuck in a low-level equilibrium ‘trap’ with low payoffs in both social and economic dimensions.

However, game theory research has evolved from its initial finding that, as Elinor Ostrom puts it, rational actors are “helplessly trapped in social dilemmas”, where individual rational strategies result in inefficient joint outcomes to the group – to a more nuanced position which reveals the conditions under which individuals and groups can organise and change by themselves “the structure of the situation they face” to increase joint payoffs.

Indeed, the value of game theory further derives from its ability to offer analytical solutions to scenarios such as the ”race to the bottom” problem. Game theoretical analyses have been used in the past to develop institutional solutions to collective action problems arising both within and between states. They are widely understood to be relevant for considering the institutional design of domestic and international labour regulation. How then, can game theoretical models help countries cooperate in order to avoid the destructive outcomes of a race to the bottom?

One potential solution, and a well-known one, is to establish repetition to the relationship in question. The long-term perspective that is achieved in ongoing relationships enables cooperation between actors. Think, for instances, about our tendency to avoid tourist restaurants in favour of more local places. The rationale is that restaurants that rely on local customers are in a situation of a repeated interaction with them: they know that customers’ experience will determine if they will return in the future.

A second possible solution to the race to the bottom problem is to use the assistance of a “correlating device”, a notion that was originally discussed by Robert Aumann. Simply put, by sending common singles to all actors on a suggested a strategy they should follow, it might be possible to coordinate their actions around a mutually-beneficial cooperative behaviour. In these circumstances, assuming that others are following the suggested strategy, then it is in the interest of each actor to also cooperate.

By exploring how these solutions can relate to concrete international institutions: the frameworks for cooperation over transnational labour regulation and international trade, these game theoretical insights can serve as a revealing and fruitful line of research. Overall, the application of these solutions to the circumstances of global labour governance can shed light on the processes by which “destructive competition” can be prevented and labour standards can be incrementally raised along with a country’s wider social and economic development.

Maayan Menashe is a PhD Candidate at the University of Cambridge, Faculty of Law. For further thoughts on this topic, see Maayan Menashe, ‘The Race to the Bottom Revisited: International Labour Law, Global Trade and Evolutionary Game Theory’ in the Oxford Journal of Legal Studies.

The agonies of the Multilateral Trading System