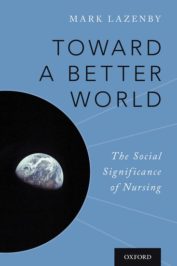 Toward a Better World

A few hours before he died, my patient, a 21-year-old man (a boy, really) who was undergoing treatment for a blood cancer came to my ward from the emergency department where he had presented with fever. His parents came with him. The emergency clinicians had begun the right protocol to address his fever. My duties, as his ward nurse, were to follow that protocol. He was doing well. He even tried to crack a joke. I laughed, though I was too old to get the reference. His joy, with his smiling parents by his side, was enough to make me happy. But then he started breathing heavily. His blood pressure dropped. I knew these as the signs of life-threatening infection. While running between his room and the rooms of my three other patients, I got the resident, whom some call the junior doctor, on the phone. After what seemed too long, she came, but shortly after she got there, my patient had grown unconscious. I grabbed a colleague on the floor and asked her to cover hanging the chemotherapy for my patient in another room so that I could sit with my unconscious, now dying patient and his parents. I knew this would burden my colleague. She had four very sick patients of her own; now she’d have five. My patient died about a half hour later. I sat with his sobbing parents for another half hour, but then my friend came to say that she had a patient in crisis. If I didn’t take back my patient who needed the chemotherapy, she was afraid she was going to be too busy and she might make a mistake. “I don’t want to kill someone. There’s enough mourning on the ward tonight already,” she said. She needed me to pick up my full load.

Another night, I had a patient in the intensive care unit who had come to the hospital with a stroke. A neurologist had placed her on a mechanical ventilator by which to oxygenate her body as soon as she had arrived at the hospital. But the stroke, an electroencephalogram had shown, had shut down her brain altogether. There was no electrical activity; she had no reflexes; and without the ventilator, she could not breathe. The clinical signs were clear: Her brain essentially was dead. The neurologist who had placed her on the ventilator met with her family and said he needed them to consent to “take her off and let her die.” Her family was confused. Why would they “let her die”? The neurologist insisted on calling an ethics consult to force a withdrawal of the ventilator—without the family’s consent. As I was in the ICU that night, I only had one other patient. But this other patient needed dialysis, which demanded a lot of my time. I didn’t have time to help the family process why the neurologist had placed their wife, mother, and sister on the ventilator without their consent and now was forcing their hand in disconnecting it. They sat in the room dazed and angry.

On both nights, I wanted to quit. And truth be told, I would have had I not needed my salary. I didn’t want to stop being a nurse. But I couldn’t deal with the emotions I felt. I felt trodden upon. Beat up, burned out. My body ached. I oozed stress hormones.

Some call what I felt “moral distress,” the emotions that arise from not being able to do what one thinks of as the right thing to do. It is right for nurses to care for bereaved parents and help a confused and angry family understand the clinical situation. I knew my nursing department had a “moral resilience” program to help with the feelings some call “moral distress.” But I didn’t want to deepen, sustain, or restore my integrity. My integrity was just fine.

Healthcare systems, of whatever stripe, control the conditions of our work. The push to treat patients in the cheapest way possible, the hierarchy that lets one type of provider decide what to do and then makes families undo those decisions and undercuts other providers’ ability to help – whatever the situation, when nurses and other healthcare providers go home at the end of the shift beaten and broken, it’s because the moral conditions of work are off.

Mark Lazenby, an advanced practice registered nurse and a philosopher, is Professor of Nursing and Affiliate Professor of Philosophy at the University of Connecticut, where he is also the School of Nursing's Associate Dean for Faculty and Student Affairs. He has written books on the 20th-century philosopher Ludwig Wittgenstein's views of religion and on the ethical significance of nursing.