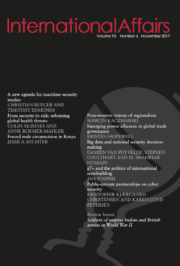 People sometimes see religion as an unwelcome infection affecting the secular politics of international relations. Such attitudes easily present themselves in consideration of terrorism and violence. Religion is seen to distort and hamper the healthy peaceful progress of secular politics, operating as an outside pathogen that inflames tensions and challenges already present in global affairs.

Religion is also said to play a role in the spread of novel coronavirus (COVID-19). Authorities are linking clusters of cases to religious congregations in China and Korea. Religious activities of Christians in Korea—attending worship sessions and outreach events multiple times a week—and their unwillingness to curb those activities may have led to large-scale spread of contagion. US pastors are also considering adjusting core rituals and acts of worship over Easter, Catholic priests in Jerusalem are advised to change how they give the sacrament, and Saudi Arabia were quick to suspend pilgrimages to Mecca and other holy sites from destinations where outbreaks are reported. The WHO and Iranian Health Ministry have linked the outbreak in Iran to pilgrims to Shi’a holy sites in Qom.

The Bahrani Crown Prince said recently that the virus, “doesn’t discriminate,” by religion, gender, or class, perhaps attempting to mitigate accounts that blame the Other, as happened with historical pandemics, such as HIV and Ebola. Belief systems influence whether people flee from pandemics or stay to support the sick, including whether to accept vaccinations. Christian Scientists believe that diseases are a state of mind, and have lobbied hard for religious exemptions to public requirements for vaccinations. At an ultra-Orthodox anti-vaccination symposium in Monsey, NY, Rabbi Hillel Handler suggested the measles outbreak was an anti-Hasidic conspiracy concocted by Mayor Bill de Blasio as a cover for diseases imported by Central American immigrants. Others at the event equated what they called, “forced vaccination,” with the Holocaust. (Importantly, most Rabbis support vaccinations.) Anti-vaccination trends are inflected with politics—in Pakistan and the Caucuses following the death of Osama Bin Laden, poor handling of the vaccination programme and distrust in government resulted in a rise in polio, while opposition to the programme from pro-Taliban groups (fearing it a ploy to sterilize Muslims) led to attacks on medical facilities.

Yet while fear and the mysterious nature of a pandemic can cause hatred and division, responses can also have the opposite effect. The Great Influenza Pandemic of 1918–19 and yellow fever crises across numerous cities and regions in America and Europe unified communities, through self-sacrificing volunteerism, healing previous social, political, religious, racial and ethnic tensions and anxieties. Similarly, Pakistan recruited the late Maulana Sami ul Haq (the so-called “father of the Taliban” in Pakistan) in promoting polio vaccinations, resulting in an uptake in immunisation—but this lesson seems hard to learn. With Ebola and perhaps coronavirus, authorities have been slow to appreciate the vital role of religious organisations in supporting health services.

Religion is therefore a more complex phenomenon in global affairs than good or bad. There’s a lot we can adapt from the example of faith-based actors working to address public health concerns like the spread of fatal viruses. Religious identities also help shape modes of belonging in global politics, such as diaspora and transnational connections. It is not only in close-knit or closed religious communities that we find clusters of infection.

Transnationalism and religious diaspora politics is another theme which can be extended when we think about global health concerns. A discussion on Shi’a transnationalism shows how important it is to understand religious diaspora as key influencers in global and state politics. Religion is not only about religious practices or identities, but also about norms, values and beliefs; ideas about the global, and the religious, influence our responses. To help us better understand the role of religious norms and ideas in global affairs, we can consider the importance of political theology and reflect on Christian Feminist theorising on the politics of hope. This politics of hope gives us ideas about how cooperation between religious communities, and with governments and international agencies, might overcome fear and mistrust. With that we might find proactive engagement to counter the spread of coronavirus.

Katherine Brown is a senior lecturer in Islamic studies and head of the department of theology and religion at the University of Birmingham. She is the guest-editor of a collection of articles in the March 2020 issue of International Affairs exploring the intersections between religion and world politics.