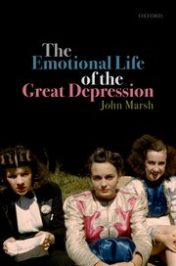 The Emotional Life of the Great Depression

Last year marked the 90th anniversary of Black Thursday, the October day in 1929 when stocks stopped gradually falling, as they had since the start of September, and started wildly crashing. All told, the Dow Jones dropped from 327 at the opening of trading on the morning of Tuesday, 22 October to 230 at the close of trading on Tuesday  the 29th, a loss of around 30% of its value.

Before stocks could even bottom out, the debate about why they crashed had begun. It continues to this day. Read around in the literature long enough, and you find that arguments about the Great Crash of 1929 usually take one of three forms: (1) There was no bubble—but investors panicked. (2) There was a bubble—and when investors realized it, they panicked. (3) There was no bubble—and no panic. These arguments about the origins of the crash matter because they bear on policy. (For example, how much should the government try to regulate the market.) But they also matter because they lead us to believe, incorrectly, that emotional is a synonym for irrational. It is not, and the sooner we realize that the better.

In the weeks and months after the crash, the economist Irving Fisher argued that stocks did not crash because they were inflated but because investors had panicked. Throughout the fall of 1929, Fisher had insisted that corporate earnings and the prospect of still greater corporate earnings had justified the growth in stock prices. True, the price-to-earnings ratio looked historically high, possibly even unprecedented. But Fisher thought that plowed-back earnings, mergers, scientific research and invention, industrial management, labor cooperation, the dividends of prohibition, and seven years of stable money more than accounted for that. In other words, this time really was different.

Why did the market crash, then? For Fisher, the market acquired its own momentum. It went down—for whatever reason—which persuaded investors that it would continue to go down. Trying to beat the fall, investors sold out, which, of course, drove prices down, which convinced still more investors that prices would fall, and they responded by selling out, on and on or, rather, down and down. Throughout all of this, however, the market—and its underlying economic soundness—had not changed. Rather, investors had. They panicked.

Galbraith’s account of the 1929 crash remains the conventional wisdom today, except among many economists, who eventually began to warm to what Fisher had argued. Much of the pro-Fisher scholarship drew from and contributed to the efficient market hypothesis, which arose in the 1960s and 1970s and held that financial markets always price assets, including stocks, according to their underlying value, and that prices only change with new information. By this light, there was no bubble in 1929. (A bubble, by the efficient market hypothesis, is all but impossible.) Nor was there necessarily a panic. Here these scholars broke with Fisher. According to them, by selling off stocks, investors did not overreact but, rather, simply responded to new information, whether a recession, which had begun in August of 1929, or to misguided Federal Reserve policy, which raised interest rates at precisely the wrong time.

We may never be able to declare a winner in this debate, but the strange thing about it is not how its disputants differ but what they take for granted. Although Fisher ultimately rejected accounts of the Great Crash, including his own, that focused exclusively on its emotional causes, he still had the habit of speaking of “the psychological short swing” to explain its gyrations. For Fisher, that is, emotion functioned as a heuristic, a way to make sense of the otherwise inexplicable. If the price of stocks exceeded their underlying value, that is because investors were “over-enthusiastic.” If, after the Crash, stock prices fell below what their underlying value or the fundamentals of the economy suggested they should be, which Fisher also believed, that is because investors “panicked.” If something, say, stock prices, did not make sense, if reality did not follow rational predictions, then something irrational and distorting must explain why. For Fisher, that something was emotion.

In this respect, Fisher and later economists speak the same language. For those who believe in bubbles, emotion manifests itself in “tulip mania” and “irrational exuberance,” driving up stock prices beyond where they rationally belong. Similarly, when the mania passes, investors “panic,” and the market comes crashing down. Meanwhile, those who believe in efficient markets struggle to show how the market is not tainted by emotion, how it accurately—and rationally—reflects the available information. For both the critics and defenders of efficient markets, that is, emotion is a synonym for irrationality. It undermines the rational and the efficient. For both, the question is not whether emotions are bad. They plainly are. The question is whether they are present or not.

That is not to say that emotions cannot distort markets, only that they do not exclusively distort markets and may—are—present when the market is neither too high nor too low. As more and more psychologists, philosophers, and neurologists have come to understand, emotions are not necessarily irrational. Rather, they are part and parcel of what we call the rational. In his groundbreaking book, Descartes’ Error, Antonio Damasio found that when the part of the brain that processes emotions gets damaged, the person who suffers such damage does not become hyperrational. Rather, they cannot function at all. Reason depends on emotion.

Emotions are—and always will be—with us.

John Marsh is an associate professor of English at Pennsylvania State University. He is the author of The Emotional Life of the Great Depression (Oxford 2019), In Walt We Trust: How a Queer Socialist Poet Can Save America from Itself, Class Dismissed: Why We Cannot Teach or Learn Our Way out of Inequality and Hog Butchers, Beggars, and Busboys: Poverty, Labor, and the Making of Modern American Poetry. In addition to these, he is the editor of You Work Tomorrow: An Anthology of American Labor Poetry, 1929-1941.

Whose streets? The picturesque, Central Park, and the spaces of American democracy