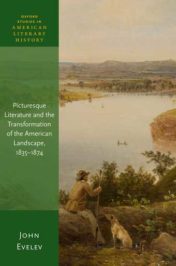 Picturesque Literature and the Transformation of the American Landscape, 1835-1874

Last summer, during the “Black Lives Matter” protests in US cities which were galvanized by the murder of George Floyd, it was common to hear marchers chanting: “Whose streets? Our streets!” In some instances, police seeking to break up the protests also took up this chant, an ironic retort to the crowd’s claim to political power. These contesting claims to possession of the city streets framed a conflict over social representation in contemporary US life: “whose streets” are they really?

The picturesque might not be the first context that comes to mind when we think of social conflict on US city streets. For most, the picturesque probably evokes pretty scenery in the countryside somewhere far from the city. But for mid-nineteenth century Americans it often had a political element, reflecting many of the social concerns of a new American urban bourgeoisie. Writings about the picturesque helped to create new conceptions of rural and urban spaces and some in-between spaces, like scenic tourism sites and the suburbs, that have come to define our landscape. These picturesque spaces were negotiating many of the social conflicts of the time.

Another prominent picturesque space developed in this period was the public urban park. The picturesque public urban park was a creation of bourgeois Americans who sought to address problems in the increasingly crowded, socially diverse, and contentious cities of the mid-nineteenth century. From 1825 to 1850 the urban population in the US tripled. Immigrants from Europe came in record numbers, settling primarily in northern cities, especially New York, swelling the ranks of urban poor and changing the social balance of American life. The sheer numbers of people, the increased diversity of the population, and the evident economic and social differences brought with it class conflict. In response, some proposed that bringing the peaceful countryside into the city in the form of landscaped public urban parks offered the possibility of ending conflict and creating a new social order.

The most influential advocate of the picturesque in mid-nineteenth-century US was Andrew Jackson Downing (1815-1852), a landscape architect and writer who radically changed how Americans saw and designed their lived spaces. Drawing attention to the beneficial social effects of public parks in European cities and their contrasting absence in his home country, Downing advocated for a “New-York Park” and claimed public parks could address the problem of social conflict: “With large professions of equality, I find my countrymen more and more inclined to raise up barriers of class, wealth, and fashion…and we owe it to ourselves and our republican professions to set about establishing a larger and more fraternal spirit in our social life.” Downing’s “New-York Park” was not commissioned as “Central Park” until after his untimely death in 1853, but still showed his influence: the design selected for the park in 1857 was created by Downing’s former partner, Calvert Vaux, and one of his acolytes, Frederick Law Olmsted  (1822-1903), who would go on to become the most famous American landscape designer.

In his writings about the designs for Central Park, Olmsted explicitly framed the park’s meaning through the picturesque’s self-conscious aesthetics of viewing: “A park is a work of art, designed to produce certain effects upon the mind of men.” But Olmsted later admitted the primary concern of his earliest designs was not aesthetics, but social conflict: “The difficulty of preventing ruffianism and disorder in a park to be frequented indiscriminately by such a population as that of New York, was from the first regarded as the greatest of all those which the commission had to meet.” This concern was not his alone: contemporary detractors to the idea of Central Park feared that it would be merely another place—like that of the city streets—where social conflict would occur. In his discussion of this issue, Olmsted quoted an 1857 article from the New York Herald:

It is all folly to expect in this country to have parks like those in aristocratic countries.  When we open a public park Sam will air himself in it. …He will knock down any better dressed man who remonstrates with him. …Now we ask what chance have William B. Astor and Edward Everett against this fellow-citizen of theirs? Can they and he enjoy the same place? Is it not obvious that he will turn them out, and that the great Central Park will be nothing but a great beer-garden for the lowest denizens of the city, of which we shall yet pray litanies to be delivered?

Astor and Everett were well-known members of the “the upper ten,” New York’s wealthy uptown mercantile elite, and “Sam” was a characteristic name for a Bowery B’hoy, a stereotypical figure for downtown New York’s working-class young men who had achieved no small degree of power in city life, both politically through their support of Tammany Hall’s Democratic political machine and socially through their aggressive presence on the streets. To the question “whose streets?,” bourgeois New Yorkers in the mid-nineteenth century felt that the answer was “not ours,” and the picturesque Central Park was designed to help reclaim them.

Advocates of Central Park sought to reclaim the city through what was called “popular refinement.” Downing defined popular refinement in his park writings: “The higher social and artistic elements of every man’s nature lie dormant within him, and every laborer is a possible gentleman, not by the possession of money or fine clothes—but through the refining influence of intellectual and moral culture.” Downing believed that exposure to refining cultural influences though public institutions like the park could transform the masses: “Let us take up popular refinement…and we shall see what a virtuous and educated republic can really become.” Olmsted embraced this notion of the public park as a symbolic vehicle for social transformation and social cohesion and would tout the success of Central Park and his later Brooklyn Park as realizations of Downing’s dream:

Consider that the New York Park and the Brooklyn Park are the only places in those associated cities where …you will find a body of Christians coming together, and with an evident glee in the prospect of coming together, all classes largely represented, with a common purpose, not at all intellectual, competitive with none, disposing to jealousy and spiritual or intellectual pride toward none, each individual adding by his mere presence to the pleasure of all others, all helping to the greater happiness of each. You may thus often see vast numbers of persons brought closely together, poor and rich, young and old, Jew and Gentile.

The reality was, of course, more complicated than Olmsted made it seem. The construction of Central Park brought with it economic and racial injustice, including the use of eminent domain to raze poorer communities on the land, including Seneca Village, a community of predominantly African-American small property owners. And despite Olmsted’s vision of a cohesive park community of “rich and poor,” it was patently obvious to contemporary working-class New Yorkers that the project of popular refinement was aimed at making them conform to bourgeois norms they consistently resisted. Poorer New Yorkers fought to add utilitarian and populist spaces like sports playing fields to the more picturesque elements—including a sheep-fold—that Olmsted initially designed for Central Park.

The history of the park has been a continual negotiation between the various different urban constituencies and their appropriations of park space. Despite this, in their The Park and the People: A History of Central Park (1992), Roy Rosenzweig and Elizabeth Blackmar conclude that “Central Park is still ‘the most democratic space’ in New York, if not in the United States.” As democratic US space, Central Park reveals both the important role that the picturesque played in the creation of a modern American landscape, and also the continual process of social negotiation that has shaped that landscape. Like the negotiations of Central Park, last summer’s “Black Lives Matter” protests are another example of the ongoing struggle to enact American democracy that has taken place in the spaces of American life.

Evelev is the author of Picturesque Literature and the Transformation of the American Landscape, 1835-1874 (Oxford 2021), published as part of Oxford Studies in American Literary History.