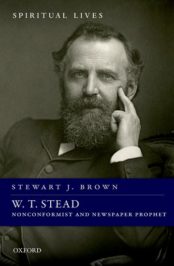 Stewart J. Brown is Professor of Ecclesiastical History at the University of Edinburgh. He has lectured widely in Europe, China, Australia, India, and the USA, and is a Fellow of the Royal Historical Society and a Fellow of the Royal Society of Edinburgh. He served as co-editor of the Scottish Historical Review from 1993 to 1999. His publications include The Oxford Handbook of the Oxford Movement (2017), The Oxford Movement: Europe and the Wider World 1830-1930 (2014), and The National Churches of England, Ireland, and Scotland 1801-46 (2001).

W. T. Stead (1849-1912) journalist, social reformer, women’s rights advocate, peace campaigner, and spiritualist–was one of the best-known public figures in late nineteenth and early twentieth-century Britain. He pioneered in Britain what was called the New Journalism, or journalism with a mission; he is well known for his investigative journalism and political activism. What is less known is how his religious faith profoundly informed all his work. For Stead, the newspaper was a pulpit, and journalists, at a time of growing mass literacy, were the moral guides for millions. The modern journalist, Stead wrote in 1886, was analogous to “those ancient prophets [who wrote] on the … politics of Judea and Samaria three millenniums ago.” It was journalists who, in a more secular age, “write afresh the only Bible which millions read.”

The son of a Congregational minister, Stead gained national prominence in the 1870s, when, as the young editor of the Darlington Northern Echo, he became a leading voice of the Nonconformist Conscience, seeking to reshape British politics, society, and imperial policies around a strict Protestant morality. But an extra-marital affair with an exotic, well-connected, London-based Russian, Olga Novikoff, drew him away from his provincial nonconformity and into London’s metropolitan culture. In 1881, he became assistant editor of London’s evening Pall Mall Gazette, and from 1883, the newspaper’s editor. At the Pall Mall, he developed new journalistic methods, including investigative reporting, sensationalist news stories, interviews of prominent figures, special extra issues, moral crusades, bold headlines, and abundant illustrations.

In 1885, he gained international attention with his highly controversial Maiden Tribute of Modern Babylon newspaper campaign directed against child prostitution and the sex trafficking of girls and young women in London. His investigative methods included posing as a sexual predator with a taste for young girls, and, to show it could be done, purchasing a girl of 13 for supposed sexual purposes, with the Salvation Army then taking the girl to France. His actions earned him a three-month prison sentence, but his intentions, to expose the sexual abuse of minors, received warm support from such diverse figures as Cardinal Manning, Josephine Butler, and Millicent Fawcett.

In 1890, Stead left the Pall Mall and became founder-editor of the successful London-based monthly, The Review of Reviews, which provided readers with a digest of articles from the world’s press, while promoting global perspectives and proclaiming the divinely-ordained destiny of the English-speaking peoples of the British Empire and United States. He believed he was “called to found for the Nineteenth Century a city of God which will be to the age of the printing press and the steam engine what the Catholic Church was to the Europe of the Tenth Century.” He became a major voice of the social gospel in Britain and the United States, especially after the publication in 1894 of his best-selling If Christ Came to Chicago, with its investigations into urban social conditions and political corruption, and its programme for urban social redemption. He sought, through forms of participatory journalism, not only to involve his readers in his newspaper campaigns, but to form a “union of all who love in the service of all who suffer” and what he called a Civic Church.

Alongside his journalistic Civic Church, Stead also developed an interest in spiritualism, ghost stories, and the occult. His was a world saturated with divinity. Convinced that he possessed telepathic powers, Stead began practicing automatic writing in 1892 to communicate with the spirits of the dead. In 1893, he founded and edited Borderland, a quarterly journal to promote the study of psychic phenomena. His volume of Letters from Julia, described as messages from the afterlife, went through numerous editions and was translated into a number of languages. Through spiritualism, he sought incontestable proof of an afterlife that would draw people of an increasingly secular age back to faith.

In the later 1890s, after what he believed to be a divine call, Stead emerged as an impassioned campaigner for world peace. He was the leading advocate and publicist of the Hague peace conferences of 1899 and 1907, and Britain’s most strident opponent of the South African War of 1899-1903. A growing appreciation of other world faiths and cultures brought him to question his earlier beliefs in the English-speaking peoples as God’s chosen, while he now condemned racism and colonial exploitation with prophetic fury.

Stead died on the Titanic in 1912, while travelling to New York to participate in a Christian evangelistic campaign. His crusading journalism, to be sure, was contentious, and many intensely disliked his methods and grandiose claims. But his impact was significant. His was a journalism infused with religious faith and a commitment to discerning a providential purpose. At Stead’s memorial service, the Baptist Christian Socialist, John Clifford, portrayed him “as a prophet who had come straight out of the Old Testament into our modern storm-swept life.” For Stead, the newspaper was the Bible of the new era, a further testament being written in a world where revelation was ongoing. Whether through the social gospel, his Civic Church, his spiritualism, or his peace campaigns, he sought to make religion live as a social force.