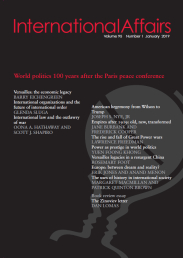 Fifty years after the first moon landing, a quantum leap is underway in space as a domain of human activity. Although most regular people are unaware of it, the global space economy has rapidly grown to almost US$400 billion in size, and will likely more than triple by 2040 (compared to 2017). The space economy is now already made up of hundreds of actors, from space agencies to private companies to start-ups. Over 70 countries have space programs and 14 have launch capabilities. These developments have involved intense cooperation across borders, both across public and private sectors.

Despite this, at the opening address of the 70th International Astronautical Congress in Washington DC in October of this year, US Vice President Mike Pence delivered an unambiguous “America first” speech in front of the world’s largest, annual gathering of international space agency leaders, scientists, engineers, private companies, and start-ups. The rest of the week, NASA Administrator Jim Bridenstine tried to undo the damage, repeatedly emphasizing that none of NASA’s future goals in space – from a permanent presence on the moon to a manned mission to Mars – would be possible without international cooperation.

This high-profile gathering of the world’s leading space professionals occurred in the context of well-publicized plans to launch a US Space Force as a sixth branch of the US military. A heavily militarized narrative is palpable in American military and policy circles when it comes to space, and it is serving to rachet up geopolitical tensions. US officials talk about the Space Force in terms of “allies” versus “adversaries,” “the next battlefield,” and have even publicly promoted the slogan, “Always the predator, never the prey,” to justify its creation.

The US Space Force is not the only worrying development in what is increasingly being characterized as Space Race 2.0. India recently exploded a satellite – something China proved it could do 12 years ago. China and Russia already have space forces, and India and France are considering plans of their own. Why are governments so focused on weaponizing space, while space agencies, scientists, and private companies are entirely committed to peaceful exploration, science, and industry?

A close examination of the development of space exploration since the 1920s shows that history has been on the side of the non-state actors, who have convinced states to pursue its peaceful uses, despite efforts to weaponize it. A major justification of those who profess that space is the next battlefield, is the insistence that space has always been about military competition – a classic security dilemma – starting with the 1960s Space Race. However, this is a serious misunderstanding of history.

Even during the height of the Space Race, there were strong efforts on the part of Americans and Soviets to cooperate. While many assume that Sputnik – the first human-made satellite to orbit the Earth – sparked an immediate panic on the part of Americans, in fact its 1957 launch occurred during the International Geophysical Year, meaning that the goal itself was formally a collective, international endeavor and some of the science needed to achieve it was being widely shared across countries. Multiple surveys at the time showed that there was little immediate concern over the Soviet achievement. Contrary to the perception of cut-throat competition, the US and USSR were already talking about the next steps in cooperation at exactly the same time as Sputnik.

Of course, political expediency and the media eventually succeeded in stoking popular panic, but space experts spearheaded serious efforts at international cooperation. Communication between NASA and the Soviet Academy commenced regularly, in what became informally known as the “NASA-Soviet Academy channel,” and the two countries moved forward with cooperation on a number of satellite projects, earth mapping, sharing of space medicine, and planning on how to work together on exploration of the lunar surface and Mars or Venus.

President John F. Kennedy eventually became so convinced of the need to cooperate that he delivered a 1963 speech at the United Nations inviting the Russians to work with the US on a joint moon landing. Soviet Premier Nikita Khrushchev accepted the idea in principle, and the leaders of their two space agencies signed an agreement to that effect. Although it wasn’t to be in the 1960s, this burgeoning space diplomacy paved the way for more intense cooperation in the following decades – Spacelab, Apollo-Soyuz, Shuttle-Mir, and finally the International Space Station. Since the 1960s, NASA has had around 4,000 international projects with many other countries.

Misperceptions and caricatures about the original Space Race arguably impact decisions that are made today about a potential Space Race 2.0, and have especially fed into the adversarial rhetoric surrounding the creation of a US Space force. It is important to remember that despite the Cold War, the superpowers treated space as a categorically different domain of activity – one that could feed the human drive to explore and serve as a reminder of our common humanity. To this day, space is not weaponized. Once again, we have the opportunity to avoid a self-fulfilling security dilemma.