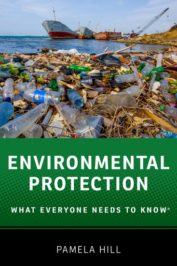 Environmental Protection: What Everyone Needs to Know®

Around the world, young adults are voicing concern that the climate is in crisis and are correctly describing this as an intergenerational inequity. The adults who determine the quality of our air are continuing to burn fossil fuels, which release the pollutants that science shows could negatively and dramatically alter planetary conditions as early as 2100. Why do we continue to do so? Because it is too expensive or inconvenient, or both, to change course. Our generation will leave the next with very different and diminished opportunities. This is not only selfish, it is unfair.

But intergenerational inequity is not just about the climate crisis. People under the age of five, who make up roughly 10% of the world’s population, are especially at risk of having unhealthy adulthoods. In addition to the dangers of greenhouse gases from fossil fuels, many other major pollutants particularly damaging to them are underregulated or not regulated at all.

Environmental health professionals, pediatricians, and policymakers are fond of saying that children are not little adults. Children do not experience pollution the same way adults do; assumptions used to evaluate pollution impacts on adults should not necessarily apply to children. A classic example is air pollution. Children’s lungs are not fully formed at birth, nor are  their immune systems. In part due to these differences, air pollutants such as exhaust have a greater effect on them and exacerbate lung diseases such as asthma.

Similarly, lead pollution in soil, water, air, and dust can affect brain development and put children at risk for learning disabilities and hyperactivity. Such exposures can have greater consequences earlier than later in life. Pollution impacts on children also last longer than they do on adults. A 5-year-old will suffer decades longer than a 45-year-old.

It is encouraging that there is some awareness of the special status of children by those setting environmental standards. Since 1995 it has been official US federal policy to “consider the risks to infants and children consistently and explicitly as a part of risk assessments generated during its decision making process.” The only major US federal environmental legislation in the twenty-first century, amendments to the Toxic Substances Control Act, requires chemical safety evaluations to include infants and children. On the international level, the United Nations, through its World Health Organization, has issued findings and urged action, stressing the impacts of air pollution on children’s health and development and including data showing that more than nine out of ten children breathe dangerously polluted air. And some policymakers have come to understand the connection between children’s health and long-term cost-savings: Healthy children become healthy adults with lower medical expenses. Economic consequences can be potent drivers of environmental policy.

The problem is that, like the human response to the climate crisis, our response to pollutants as they affect children is too little and maybe too late. Take, for instance, the regulation of particulate matter, common airborne organic and inorganic chemicals like soot, smog, and aerosols. Particulate matter is a criteria pollutant, meaning that it is heavily regulated internationally. But studies indicate that particulates still account for such outcomes as significant early miscarriage, preterm delivery, and low birth weight, as well as childhood high blood pressure. Heavy metals are another example. These are very dense (at least five times the density of water) and usually highly toxic elements, including lead and cadmium. They are ubiquitous and easily inhaled, ingested, or absorbed by the skin. Although they are regulated internationally they still impact children’s health.

What should decision makers and regulators do? First, make children’s health a top priority when setting environmental policy. Second, make sure chemicals are tested using methods and assumptions that include impacts on children. Third, employ the precautionary principle, which holds that when there is significant doubt about the safety of a pollutant or chemical new to the commercial market, don’t give industry the benefit of the doubt. Rather, we should exercise caution and regulate it aggressively to reduce risk. Fourth, consider fundamental fairness: ensure intergenerational equity every step of the way.