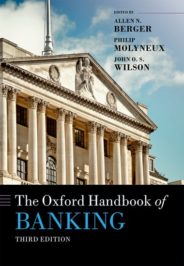 The Oxford Handbook of Banking

It has been over a decade since the global financial crisis of 2007-2008, which threatened to destroy the financial system, and wreaked havoc on the financial well-being of households, firms, and governments. It is an appropriate moment to assess where the banking industry is today to review the research on the policies implemented during and since the crisis to determine their effectiveness in making the financial system safer, and to evaluate the challenges to the banking system in the future.

The policy responses of the US and European governments to the crisis were similar, but not identical. Governments introduced a broad range of bailouts and guarantees aimed at preventing runs on banks and money market funds, aggressive recapitalization of banks and the wider financial system with expanded deposit insurance coverage, liquidity injections to various markets and institutions, and accommodative fiscal and monetary policy aimed at boosting economic growth. In an important difference, the lender of last resort facility in the United States expanded beyond the commercial banking system to investment banks and funding markets. In order to preserve the domestic housing market, the U.S. Treasury Department took over two government-sponsored enterprises, the Federal National Mortgage Association (Fannie Mae) and the Federal Home Loan Mortgage Corporation (Freddie Mac). The federal government also enacted several other policies to slow the decline in house prices and aid real estate financing.

In general, the policy actions on both sides of the Atlantic were widely considered to have been successful in preserving the stability of banking systems and averting a more severe economic downturn. However, just when financial commentators believed that the crisis was subsiding, several countries in Europe experienced a sovereign debt crisis. Government deficits and debt, exacerbated by the bailouts of troubled banks, triggered a crisis of confidence in certain Eurozone economies including Greece, Italy, Ireland, Portugal, and Spain. The combination of a banking and sovereign debt crisis led to European banks recovering more slowly than counterparts in the US.

The United States stated the legislative process to deal with the crisis and reduce risks in banks earlier. The Dodd-Frank Wall Street Reform and Consumer Protection Act of 2010 set rules as to how banks should be regulated such that taxpayers were not liable for future bailouts. Many of the recommendations of Dodd-Frank were slow to be implemented fully. A bill passed by Congress in May 2018 rolled back various features of the legislation, especially in areas that impacted small and medium-sized banks. In Europe, the structural reforms proposed in the 2012 Liikanen Report have been introduced in a phased manner. By early 2018, a ban on proprietary trading came into in force (the similar US Volcker rule from the Dodd-Frank Act was in place in 2015), and national regulators across the EU enforced the legal separation of high-risk trading from core deposit-taking and lending for certain large banks. As in the United States, a new bank resolution regime was created in the shape of the Bank Recovery and Resolution Directive of 2015, albeit this has not been fully introduced in all member states. It’s unclear how Europe will implement the new European deposit insurance arrangements as part of plans for a Banking Union.

Financial technology developments include online banking, robo-advisory investment services, distributed ledger technologies (Blockchain) and marketplace lending. There are now numerous cryptocurrencies in existence (including Bitcoin, which accounts for 66% share of the total cryptocurrency market capitalization). These developments bring both threats (via competitive challenges from the entry of technology firms) and opportunities (via changes to enable the re-design of existing business models) for established banks.

Many of the aforementioned developments are affecting the banking industry globally. Moreover, the slowdown in economic growth, the low interest rate environment, trade wars and Brexit impediments, together with regulatory measures designed to improve safety and soundness, have acted as a drag on bank performance. Banks and regulators continue to grapple with the complexities of measuring and managing bank specific and systemic risk. Uncertainty continues to heighten. Climate change, trade wars, Brexit, Euro area challenges (such as Italian indebtedness), the slowdown in emerging markets (China in particular), political polarization, and Middle-East tensions all add to uncertainty and a less favorable global operating environment for banks going into the next decade.