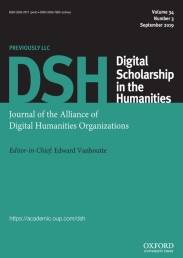 Digital Scholarship in the Humanities

Many of us know the name Jack the Ripper. Perhaps we associate it with a dark shadow wearing a top hat and holding a knife in the middle of a foggy street in Victorian London. But not many of us know that this image is very far away from any reliable fact that has reached us about the 1888 tragic events that took place in Whitechapel. One of the most fascinating aspects of the Whitechapel murders is indeed how long they survived in the collective imagination and how distant their recollection is from anything we know to be true.

Between 1888 and 1891 there were between 5 and 11 unsolved murders of women in Whitechapel, most of them with distinctive features such as the removal of organs.

Traditionally, only five of these murders are attributed to Jack the Ripper. However, the reality is that there is no hard evidence that any of these murders were connected. With so little evidence to speculate on, why are we then still interested in this case and why is there a new book, film, or documentary every year? The answer is not just because it is a mystery. There are so many other fascinating and equally gruesome mysteries from Victorian London that most people have never heard about (e.g. the Thames torso murders).

I believe that the answer lies in the Jack the Ripper letters, which painted a persona of this killer that is responsible for its long-lasting legacy. The name “Jack the Ripper” appears for the first time in the Dear Boss letter, dated 25 September 1888 and addressed to the Central News Agency in London.

Written in red ink, the letter is distinctive for its style and tone and is characterised by a certain arrogance in taunting the police for their failures. The letter was regarded as a hoax until a double murder of two women on the 30 September. The following morning a postcard, the Saucy Jacky postcard, reached again the Central News Agency.

Due to lack of leads and the timing and content of these letters, the police decided to make these two texts public. Once these texts were published, hundreds of hoaxers pretending to be Jack the Ripper sent letters to various recipients across the UK, to the police, the press, or simply their neighbours.

At a time in which newspapers was running out of new things to say about the Whitechapel murders, these two letters became pure gold for the press. They offered new clues for any interested reader and, most importantly, it was finally possible to call this murderer by name.

However, the receipt of these letters was perhaps not just a stroke of luck. In all likelihood, the original two letters were in fact crafted by a journalist. A letter written by Detective Chief Inspector John George Littlechild famously wrote that Dear Boss was “a smart piece of journalistic work.” If this is true, then the Jack the Ripper letters are probably the most successful case of fake news in history. Whoever was behind it created a fictional character that is still being commercially exploited, not too differently from other unquestionable works of fiction.

If the theory is correct, the real question is therefore not who was Jack the Ripper, but who created Jack the Ripper. One theory connects the letters to a reporter called Frederick Best, who worked for one of the very first tabloids, The Star. Another theory comes from Inspector Littlechild himself, who wrote that “it was generally believed at the Yard that Tom Bullen of the Central News was the originator, but it is probable Moore, who was his chief, was the inventor.” This theory is quite credible since the Central News Agency had a well-known habit of fabricating news.

After more than one hundred years, physical evidence cannot offer much help because it is too corrupted. However, the language of these letters has reached us unchanged and the new discipline of forensic linguistics can be used to discover new evidence.

One of the contributions of forensic linguistic evidence is to settle a debate on whether the two letters were indeed written by the same author. There are substantial and distinctive linguistic similarities between them, such as the use of the rare structure [to keep a letter back till], that constitute solid evidence of common authorship. However, the question of whether the author could have been Best or Bulling cannot be answered without enough comparison material from these two journalists, which so far was not possible to find.

A mystery within the mystery could however lead to the answer. The Dear Boss letter and the Saucy Jacky postcard are the most linguistically similar to one of the 200 and more letters allegedly from Jack the Ripper: the Moab and Midian letter, the third letter ever received by the Central News Agency. This letter is also quite peculiar, because nobody except Tom Bulling has ever seen it. For reasons still unclear, the journalist received it and thought it would be better to copy it word for word and send it to the police, as opposed to just sending the original. Because the linguistic evidence suggests that the same person who wrote Dear Boss also wrote Moab and Midian, if this person was Bulling, we then have evidence that he, or the Central News Agency, was responsible for creating Jack the Ripper.

Besides the murders and the authorship question, the media exploitation of these events to sell newspapers is an interesting academic case study that deserves more attention. In our quest to understand the birth of tabloid journalism and fake news, maybe Jack the Ripper can help.

Andrea Nini is a lecturer in linguistics and English language at the University of Manchester, where he teaches courses in forensic linguistics and stylistics. His specialisation is the analysis of linguistic data using computational methods. He has published on authorship attribution of historical texts such as the Bixby letter and the Jack the Ripper letters using stylometry and his PhD thesis was on the authorship profiling of malicious texts in forensic contexts. Andrea has also carried out research and published in other areas of linguistics, such as the use of social media data for dialectology and language change, and on register variation using quantitative and computational approaches. In addition to his academic work, Andrea also offers consultancy as a forensic linguist to private clients and the police.