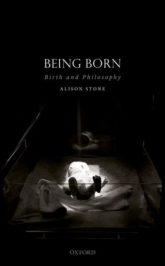 Being Born: Birth and Philosophy

Many classic existentialists— Albert Camus, Simone de Beauvoir, Martin Heidegger—thought that we should confront our mortality, and that human existence is fundamentally shaped by the fact that we will die. But human beings do not only die. We are also born. Once we acknowledge that birth as well as death shapes human existence, existentialism starts to look different. The outlines of a natal existentialism appear.

Let’s look at this first in relation to Beauvoir, who writes in The Ethics of Ambiguity that “every living moment is a sliding towards death.” It is not simply that we are all ageing and so getting closer to death. We are constantly pursuing projects and creating values—for instance, I’m writing this blog piece, thereby giving value to the activity of writing philosophy. But, Beauvoir thinks, my projects risk being brought to nothing when I die. When I die, either my projects will be left unfinished or, if I had completed them—say, by finishing writing a book—I will no longer be there to invest this achievement with value and meaning. The book I labored over will end up a mere dusty tome languishing on a shelf. For Beauvoir, then, death threatens the meaningfulness of one’s existence. But we can combat this threat by sharing our projects and values with others, who can then take up and continue these projects even after we die.

However, things look different once we remember that we were all born. Having been born, I began life helplessly dependent on care from the adults around me, and very unformed and immature. I began straightaway to absorb the culture of the part of the world I was born into, partly by learning it from the adults I depended on.

So whenever I pursue a project, such as writing this essay, I do not take it up just out of nowhere. I have always-already been involved in particular projects which I have taken on from the others who have influenced me. For instance, I have always read voraciously, something I took over from my mother. Whenever I read, something of my relationship with my mother is kept alive.

In pursuing particular projects, then, we are always carrying forward meanings embraced by others before us. Since those people in turn acquired their projects from others who preceded them, we are always carrying forward webs of meaning that have come down along chains of predecessors. Thus, as beings that are born, we never create meaning and value from scratch as single individuals. We receive and inherit value and meaning from others. It is these webs of inherited meaning that death threatens—and the threat only matters because we are already attached to these meanings, by virtue of having been born.

Now let’s look at Camus’s novel The Outsider (L’Étranger). It opens starkly: “Today mother died. Or maybe yesterday, I don’t know. I got a telegram from the home. ‘Mother deceased. Funeral tomorrow. Deep sympathy’. That means nothing. It could have been yesterday.” The narrator, Meursault, goes on to kill an unnamed Arab whom he perceives to have been threatening him. Meursault stands trial and is sentenced to death. During the trial he is portrayed as a monster, a man devoid of normal human emotions, values and attachments.

Yet Camus sees Meursault as a hero of sorts. Meursault confronts what Camus regards as the truth about the world—that there is no inherent value in anything: value only ever exists insofar as human individuals create it by choosing to invest certain acts or things with value. For Camus, then, there is no inherent value in life or in being alive. Meursault recognises this: he sees that there is nothing inherently sad about his mother dying and nothing inherently wrong about his killing the Arab. These would be sad and wrong only if he chose so to regard them—and he does not.

But, contrary to Camus, there are values that Meursault has inherited by birth. As a working-class white Algerian, he is estranged from both the native Arab population and the colonial elite. He feels rootless, dislocated and alienated. This makes it possible for him to kill the Arab, from whom he is disconnected. Meursault’s moods and actions are actually motivated by the social position he inherited by birth.

Had Camus considered birth, then, he would have seen human existence differently. For him, the world is inherently meaningless, and we each face the daunting task of creating meaning single-handed. But in reality we always-already inhabit webs of meanings that have come down to us from birth.

Hidden within Beauvoir’s and Camus’s death-focused approaches, we start to see how birth also structures human existence. We receive and inherit horizons of meaning and value by birth, through the relationships and locations in society and culture into which birth places us. Meaning-reception comes before meaning-creation.

Alison Stone is Professor of Philosophy at Lancaster University. Her research interests are in feminist philosophy, and, post-Kantian continental philosophy. She is the author of several books.