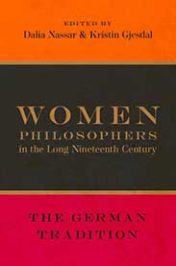 8 March. A day to celebrate womanhood and women’s achievement? A day to protest regional and global gender injustice and call for radical change? 8 March is now a holiday adopted by the United Nations and marked across different continents, time zones, and political affiliations. It has become a day for all and thus, some worry, a day for no one.

Zetkin, though, kept seeing International Women’s Day as an occasion to mark the fight against the sufferings of working women who confront illness, epidemics, death, poverty, violence, and imperialistic wars––sometimes, as she puts it, “with the aid and blessing of ‘democracy’.” The day must be international, she argued, because these sufferings are shared by all the oppressed, regardless of national borders. It is women’s day because, in her words, the inhuman burden of global capitalism weighs with especial heaviness on women.

In an age where women could not yet vote, Zetkin positioned herself as a flaming feminist within the socialist movement. For her, 8 March was a day that was and had to be politically motivated. It was not an occasion for joyful celebration, but a day to remind ourselves—through taking to the streets and articulating an uncompromising will not to give up fighting—that the struggle for equality is not won until every woman can assume safety, health, and equal work opportunities (and thus be in a situation in which womanhood can be celebrated).

How, one could ask, did Zetkin square her feminist and socialist engagements? Wouldn’t her Marxist commitments bind her to fight for universal abolishment of private property rather than the improvement of the conditions for a particular group (in this case: women)? Zetkin grappled with questions around class and gender—which one should get priority? Do we need to prioritize the fight for one over the other?—all her life. In this sense, her writings investigate a series of arguments and positions that maneuver the difficult line between gender solidarity and solidarity with oppressed peoples regardless of gender. Assessments of her position, even her own assessment of her position (!), often take the form of checking it against the parameters of Marx’s thinking. This, though, is not the only context in which Zetkin’s work should be read. Indeed, this kind of reading betrays a blind spot in the history of women thinkers: to the extent that they are at all recognized as substantial contributors, their thoughts are related to a canonical male figure.

As a political thinker and activist, Zetkin positions herself in the wake of Marx, Engels, and other socialist luminaries. She should, however, also be placed within the context of a strong lineage of women thinkers to whom philosophy was an important and indisputable vehicle for social change. Zetkin’s friendship with Rosa Luxemburg is well-known. Less well-known is the formative role played by Louise Otto-Peters and Auguste Schmidt, whose institute in Leipzig Zetkin attended. Moreover, Zetkin follows and radicalizes the lead of Bettine Brentano-von Arnim, whose late work addresses poverty, class, illness, and political violence. We can also helpfully situate her contribution with respect to Hedwig Dohm’s critique of a biological notion of gender and the tendency to view women in light of their reproductive capacity.

Gender injustice, social issues, incarceration politics, war, and imperialism are just some issues women philosophers address in the nineteenth century—and address with force, consistency, and convincing arguments. Excluded from university positions, these women did not write for an audience of academic colleagues. They did not produce theoretical systems—and yet their work can help us think through central issues in a way that is both profound and systematic.

Placed within this line of philosophers, Zetkin’s contribution is clear: she offers a non-essentialist, non-biologist approach to gender, she delivers sharp arguments in favor of equal pay, voting rights, and education. She is among the first to analyze the challenges of intersectionality. Moreover, her focus on women’s rights—against the background of which her work for International Women’s Day emerged—should be understood with respect to a larger engagement for the oppressed. It is from this point of view that Zetkin engages systemic racism in the US. It is, moreover, from this position that she discusses child poverty and exploitation. And it is from this point of view that she, from the early 1920s onwards, bravely takes on fascism both in its budding and manifest forms.

The question, thus, is not to what extent her work is in line with socialist doctrines, but, rather, “what we can learn from this nineteenth-century philosopher?” And concerning 8 March and International Women’s Day, one of the takeaways from Clara Zetkin is that once her work is read within a broader context of women’s philosophical contribution, there is no tension between a radical fight for women’s rights and living conditions and a universalist analysis of oppression in its many shapes and forms. For Zetkin, 8 March could never be a celebration of womanhood. It was, instead, part of a sustained fight for a society under which women, of all colors and walks of life, could lead genuinely human lives. Her mission was radical; her message was universal.

Kristin Gjesdal is Professor of Philosophy at Temple University, Philadelphia. Her research covers eighteenth- and nineteenth-century philosophy, hermeneutics, aesthetics, and phenomenology. She is the author of three monographs, most recently The Drama of History: Ibsen, Hegel, Nietzsche (Oxford University Press, 2020) and editor or co-editor of seven further volumes.

12 of the most important books for women in philosophy