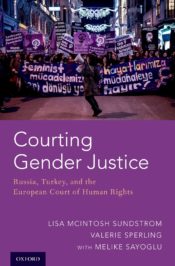 Coal miners are predominantly male, and kindergarten teachers predominantly female. Professions are gendered, as any Department of Labor survey, anywhere in the world, illustrates. And until the 1980s, the nouns used in English to describe some occupations were also gendered, such as fireman, or stewardess. Feminists in English-speaking countries fought this largely by neutralizing male and female occupational nouns (fireman to firefighter, stewardess to flight attendant), and sometimes by dropping a familiar female noun in favor of a technically male, but standard noun (actress to actor), or ignoring an unfamiliar female noun (senatrix) and simply using the grammatically male one (senator). These techniques successfully eliminated the awkward combination nouns that had been used to describe women who had taken on traditionally male jobs, like woman-doctor, woman-lawyer, and woman-ambassador.

Some Russian feminists have embarked on a quest to address the problem of sexist language by inventing or bringing back female-gendered nouns for professionals in occupations where the norm is male. This language feminization is more challenging than it sounds, however, because the Russian language, unlike contemporary English, is thoroughly gendered. Every noun has a gender (male, female, or neuter), and, as it happens, most occupation nouns are male. There are exceptions— housewife (domokhoziaika) is female, as are nurse (medsestra) and nanny (niania). Sometimes the word “woman” will be affixed to a male-gendered occupational noun, but, as in English, this makes a woman who adopts that male profession sound like an oddity or exception (e.g. woman-doctor or zhenshchina-vrach). The new or resuscitated words gaining in popularity in Russia today change the endings of the male nouns, rendering them grammatically female. Thus doctor (vrach) becomes vrachinia (something like doctoress), lawyer (iurist) becomes lawyeress (iuristka), and professor (professor) would be rendered as professoress (professorka).

To the ears of English-speaking feminists, this might sound like a Great Leap Backward.   The ending ess — like the Russian ka — can be read as informal, endearing, or diminutive, a gentle linguistic suggestion that the feminized version of the profession is not quite as serious as the profession signified by the male noun. After all, if a poetess (whether in English or in Russian) were truly talented, she would be called a poet. But, Russian feminists argue, without the female ending, women in certain professions simply disappear. The Russian words for president and mayor, for example, are gendered male, linguistically speaking, which makes people more likely to assume that the occupants of those positions are and should be men. Putting ka at the end of occupation nouns renders women visible — and plausible — in those occupations instead. Moreover, as Olga Lipovskaia, a doyenne of the feminist movement in Saint Petersburg, argues, the only reason that ka or essa sounds diminutive and signifies something less substantial than the noun without that suffix, is that patriarchy has taught us that things identified with women are less valuable than things identified with men.

The use of feminitives (feminitivy), as these nouns are called, is controversial.  As with any effort to alter the language, conservatives resist such changes, seeing the new words as awkward-sounding perversions of the mother tongue. Feminitives are keenly debated on social media, as with one Facebook post about a Moscow schoolgirl whose teacher took points off her Russian language test score for using the feminitive for trainee (stazherka) during an oral exam. Proposals have been floated to fine journalists for employing feminitives in their articles, and to delay the introduction of such terms into dictionaries for at least 40 years. Languages are not static, however, and some variations provoke more resistance than others. After all, Russia has adopted a wide range of English-language words that have achieved considerable penetration of the public sphere.  Words like update (apdait) and parking (паркинг), not to mention names of stores like Fresh Market and Organik Shop, have been imported wholesale. Russian conservatives use English terms even to condemn western phenomena (such as using GayRopato describe liberal-leaning Europe).

Russian feminists also debate the use of feminitives. To some, affixing the female endings sounds both artificial and blunt, needlessly emphasizing the fact that a woman is performing the job — something which would usually be expressed by mentioning the person’s name (as Russian last names are almost all gendered linguistically). Others believe the emphasis brings an element of fairness to an unfair linguistic situation, making it clear that a person does not have to be male in order to inhabit a range of occupational identities. One young feminist campaigning to recruit women candidates to run in the September 2019 municipal elections in Saint Petersburg uses potential candidates’ affinity for feminitives as a litmus test; she refers to deputesses (deputatki) on her recruitment website, and figures that if a potential candidate sees that and remains interested, it’s a good indicator of her feminist values. By contrast, a feminist sociologist at a well-known Russian university, while generally finding the discussion of feminitives a positive development, noted that she did not want to be called a “professor-ka.” The impact of patriarchy on language is hard to undo.

Changing the language is serious business. It isn’t only feminists who have taken up this discussion; the Russian police have evidently also found feminitivy a matter of significance.  On 1 May 2019, six feminist activists with the Saint-Petersburg collective Eve’s Ribs (Rebra Evy) were arrested on their way to a Labor Day demonstration; the police also confiscated their posters — each one featuring a single hand-lettered female-gendered noun describing a profession: doctor, lawyer, author, historian. The activists were released after several hours, but their posters were detained until the activists came to the police station a week later to demand their return. After initially being told that the posters could not be returned on a Saturday (the activists pointed out that since the posters had been taken on a Saturday, surely there was no reason they could not be returned to their rightful owners on a Saturday), they were told that the police needed to hang onto the posters in order to perform an expert analysis on them to see whether they constituted “extremism” or not.

Language affects the way we think about the world, and about our own possibilities. How we shape and change the language matters. Yet, a language’s grammatical peculiarities can also dictate the options available without radically restructuring the common tongue. For example, it would be extremely complicated to revise the Russian language by re-inventing all professional nouns as linguistically neuter, ending in -o or -yo (creating words that would sound something like doctoro and lawyero in English), and doing so would make the gender of the doctor or lawyer in question harder to discern. It is similarly complicated to create job-related nouns in the Russian language that would accurately express the identity of people who identify as non-gender-binary (and, so far, there has been no Russian movement toward doing so). English allows for this easily by using the standard nouns (lawyer, doctor, firefighter, soldier), and occasionally alters terms imported from other languages in order to do so (Latinx being an increasingly familiar example to avoid Latino or Latina). Not so for Russian.

The related problem of gendered pronouns and possessive pronouns has been handled in various ways in English, from alternation (using he in some examples and she in others), to combining the two in speech and writing (When a lawyer goes to court, he or she should look his/her best), and even to pluralization, a choice resisted because of its sheer grammatical defiance of the common use of the plural pronoun (When the president gives a press conference, they stand in the Rose Garden).   The he or she technique works in Russian (Kogda chelovek zanimaetsia sportom, on ili ona…), though it is not commonly used, and is complicated by the fact that adjectives and some verb forms are also gendered, introducing a potentially long list of or clauses into a sentence. The very fact, though, that the discussion of feminitives has become widespread in Russia in the past two years suggests that issues of sexism and how to counter it are increasingly permeating the popular consciousness — a welcome development for Russia’s often-marginalized feminist community.

Valerie Sperling is a professor of political science at Clark University. This essay was based in part on interviews conducted during fieldwork in Moscow and Saint-Petersburg by Valerie Sperling and Lisa McIntosh Sundstrom in May 2019. Sperling is the author of Sex, Politics, & Putin: Political Legitimacy in Russia (OUP 2015), and co-author of Courting Gender Justice: Russia, Turkey, and the European Court of Human Rights (OUP 2019) with Lisa McIntosh Sundstrom and Melike Sayoglu.