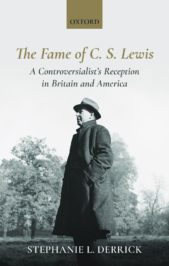 The Fame of C.S. Lewis

In September 1947 the paths of two great minds and almost exact contemporaries crossed when Boris Artzybasheff painted a portrait of C. S. Lewis for the cover of Time magazine. Lewis was by then an established name in Britain and a rising star in America, while the distinctive style (if not name) of Russian-born New Yorker Artzybasheff was familiar to millions on account of the hundreds of illustrations he did for popular books and magazines. Both men were shaped deeply by the wars they experienced as teenagers, by the growing prevalence of machines in society, and by a faith in their own singular points of view. Both wrote children’s books and had a keen interest in myth and fantasy, and both disparaged commercialization of the arts while benefitting from it. In the decades since their deaths, however, it was Lewis whose name remained known to the public, while Artzybasheff is remembered by few besides art specialists. The reasons for this are complex. But it occurred to me recently—having searched for and failed to locate Artzybasheff’s original portrait of Lewis—that one prosaic differential is the degree to which their respective estates preserved and promulgated their legacies.

Lewis was a scholar of literature at Oxford and Cambridge Universities and an adult convert to Christianity. A series of broadcasts he did during the Second World War explaining the tenets of Christianity, along with a book called The Screwtape Letters, made his a household name. Lewis then wrote The Chronicles of Narnia in the quiet of the post-war years. After his death in 1963, an American fan named Walter Hooper took it upon himself to organize, manage and promote Lewis’s substantial literary estate. His two stepsons did their best to maximize the estate’s financial potential. The Chronicles of Narnia reached ever new audiences through an expanding educational system and with each new film and television rendition, while many of his other books remained steady sellers, especially in America. Such success requires people who are willing and capable of managing the myriad of logistics that accompany a growing, international, multi-media brand—and Lewis certainly had that.

Artzybasheff, by contrast, didn’t have children or other heirs who were willing to invest in his legacy, so his striking anthropomorphisms of man and machine (a favorite subject) haven’t been utilized by some modern company’s advertising team or made into T-shirts. His was an immigrant’s story. He was born in Kharkov, Ukraine, then part of Russia, and emigrated to New York in 1919, spending his twentieth birthday on Ellis Island.  The first book he illustrated, Verotchka’s Tales, appeared in 1922 and many more followed through the 20s and 30s, including several that he both wrote and illustrated such as Seven Simeons: A Russian Tale (1937), winner of the New York Herald Tribune prize. During the war he began doing covers for Time—215 in all between 1941 and 1965—while the State Department employed him for cartography projects and a United Nations logo. Martin Salisbury described Artzybasheff’s art like this: “Words such as ‘idiosyncratic’ or ‘eccentric’ do not begin to do justice to the extraordinary creations of Boris Artzybasheff. His was an art that defies categorization—one of elaborate compositions and constructions, rendered all the more surreal and disturbing by his intensely detailed techniques.”

His incredible art retains its power today. But Artzybasheff had no fans come forward after his death in 1965 to collect and preserve his work. Instead much appears to have been lost; the largest collection, at Syracuse University, contains few originals. Artzybasheff, also unlike Lewis, did not have the steady support of a university but painted and drew for businesses who could issue him a check.  Perhaps this, too, meant there were fewer natural allies or colleagues to keep his art before the public and his memory alive.

Lewis and Artzybasheff crossed paths one more time, when the latter included creatures from Lewis’s Out of the Silent Planet, the Hrossa, in a drawing of Martians portrayed in literature through the centuries, for Life magazine in 1956. It may be that when Artzybasheff was asked to paint a portrait of Lewis for Time, he discovered the author’s science fiction trilogy and a kindred imagination. Lewis, for his part, was lucky to have been in the hands of such an artist.